iPad 10th Gen vs iPad Air 5th Gen Comparison: Which one should you buy 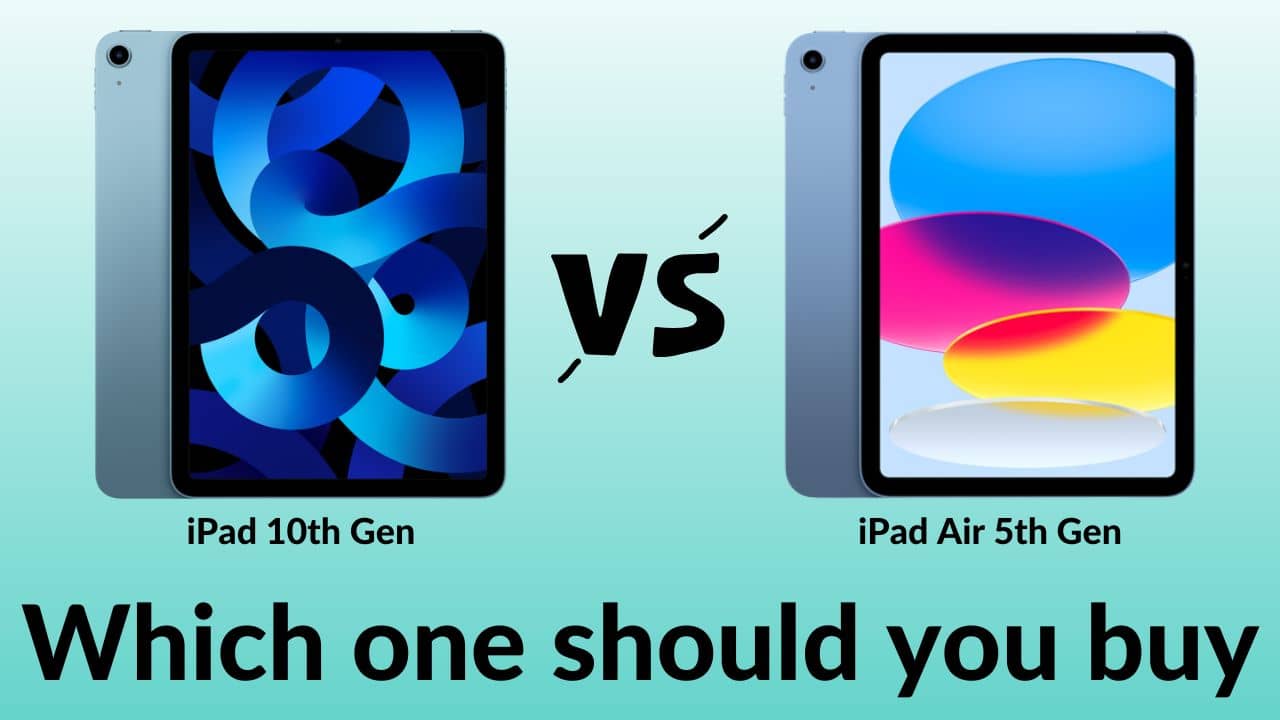 Apple recently introduced the iPad 10th Generation, the successor of the iPad 9th Gen launched in 2021. The 2022 Apple iPad got a design overhaul this year, both on the outside and upgrades on the inside. You also have the option to choose the next Apple tablet from four different punchy color options. Did you know the 10th Generation iPad was launched alongside the new M2 iPad Pro (2022) and the new budget-friendly Apple TV 4K. Unlike every year, the tech giant did not have a dedicated event for the new iPads. Moving on, we will be focusing on Apple’s new affordable tablet and comparing it with iPad Air 5 launched earlier this year. On the cards, the iPad Air 5 looks powerful and a performance beast with an M1 chip on the inside (the same chip from the 2020 MacBook Pro & Air), but we’ll have to wait and see if it beats the new iPad 10th Gen with the same price segment.

When we talk about the design difference between iPad 2022 and iPad Air 2022, there are nominal differences between both devices. First and foremost, the iPad 10th Gen and iPad Air 5th Gen feature the same design with displays of similar size and technology. While there are differences when it comes to supporting a different layer of technology for the Apple Pencil. The iPad 2022 comes with support for Apple Pencil 1st Generation whereas the iPad Air 5 supports the use of Apple Pencil 2nd Generation. Since the iPad 10th Gen has a USB-C port and still uses the 1st Gen Apple Pencil, you’d have to use a dongle to charge it. Previously with the iPad’s lightning port, you could always connect the Pencil directly to the iPad to charge it. After the USB-C port is integrated into the new iPad, that’s not possible. Now you need a USB-C-to-lightning cable and the dongle to be able to charge your Apple 1st Gen Pencil.

On the other side, you can magnetically attach the 2nd Gen Apple Pencil to the side of the iPad Air 5th Gen for charging or just carrying it.

As far as colors are concerned, the iPad 10th Gen is available in four color options: Blue, Pink, Silver, and Yellow. Whereas, you’ll get five color options on the iPad Air 5th Gen, i.e. Space Gray, Blue, Pink, Purple, and Starlight. Visually, the colors on the iPad 10th Gen look more bright and punchy as compared to the iPad Air 5th Gen. The 5th Generation iPad Air has toned-down and subtle colors. Having said that, we leave it up to you which one is best for you, it is always subjective and a matter of personal choice.

When we talk about the differences between iPad, we just can’t miss their display. But, surprisingly the iPad Air 5 and iPad 10th Gen have similar display specs. Both devices have a 10.9-inch Liquid Retina IPS LCD display with a 2360 x 1640 pixels resolution. Even the peak brightness of both iPads is up to 500 nits. One of the major differences between the two displays is that the 10th Gen iPad only supports Apple Pencil 2nd Gen, whereas the iPad Air 5’s panel is compatible with Apple Pencil 2nd generation.

Another notable difference between iPad 2022 and iPad Air 2022 is related to the color technology used. While the iPad 10th Gen supports sRGB color gamut, the iPad Air 5th Gen supports a more colorful P3 color gamut. If you are unaware the P3 display offers a 25% increase in color space as compared to the sRGB. Putting it simply, the P3 color gamut offers real-life true colors and better color accuracy.

Further, the iPad Air 5th Gen has a fully laminated display with an anti-reflective coating which can be useful to cut down eye fatigue while browsing in a darker environment. But, that’s not the case with the 2022 iPad 10’s display, you won’t get anything similar to that this time around. Undoubtedly, the iPad Air’s display collects a few more points yet again against the iPad 2022 display.

When talking about iPad Air 5 vs iPad 10th Gen we just can’t skip talking about performance. The device performance is influenced by the processor or SoC (System on Chip) it packs i.e. the CPU & GPU.

One of the major differences between these two devices is the chips inside them. To remind you, the Apple tablets pack in-house Silicon chips that the Cupertino giant started to manufacture for quite some time now. If you are unaware, the iPad 10th Gen packs A14 Bionic, whereas the iPad Air 5 houses the M1 chip. If you recall, that’s the M1 chip from one of the best-selling MacBook Air from 2020. That’s what brings in major performance differences between both devices.

Let’s talk about synthetic benchmarks & performance. If you’re new to this then, don’t sweat, we’ll break it down and simplify even the most technical things such as CPU specs for you so you can easily make the right purchase decision. Benchmarks basically give us a measure of the performance capabilities of machines. 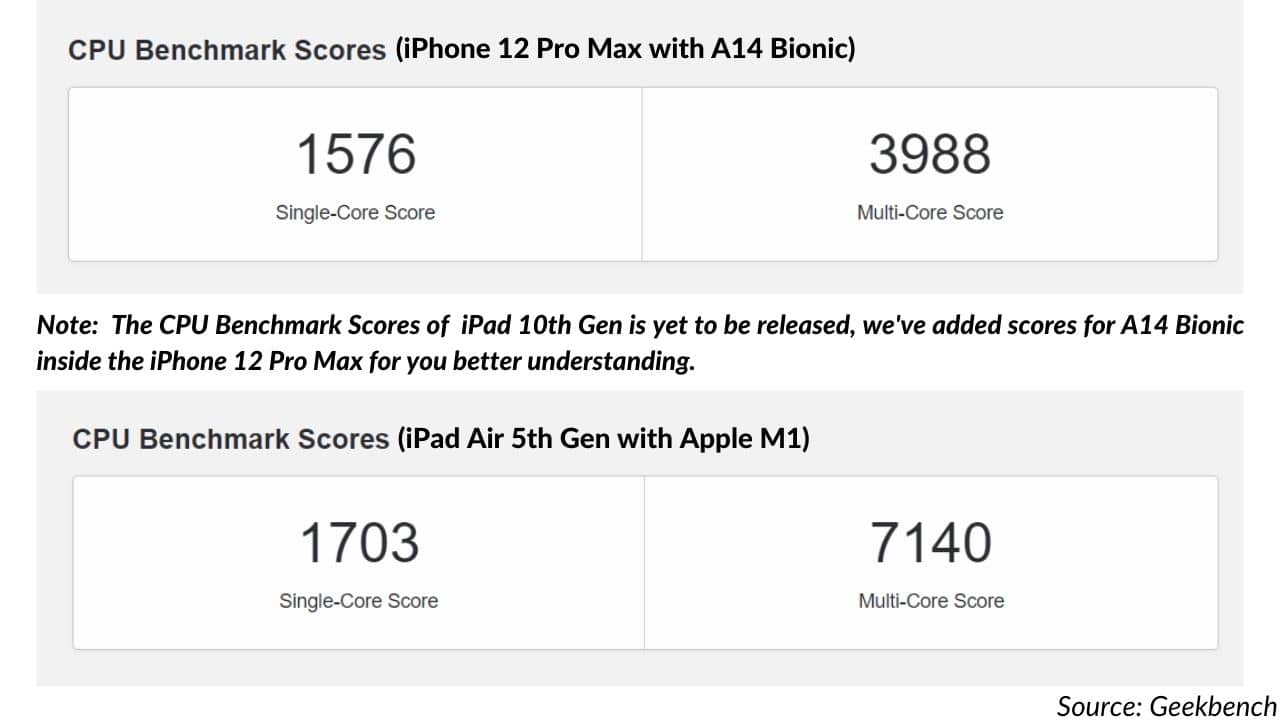 The A14 Bionic chipset comes with a 6-core CPU, 4-core GPU, and a 16-core Neural Engine, and was introduced first on the iPhone 12 series. We are yet to see the Geekbench score for the 2022 iPad. According to the Geekbench test results from the iPhone 12 Pro max which also had the A14 Bionic chip, we can expect a 1576 Single-Core Score and a 3988 Multi-Core Score. Well, there’s almost a 21% jump on the multi-core score as compared to the A13 Bionic chip’s 3304, which is packed inside the iPad 9th Gen. That’s a respectful upgrade to the iPad 10th Gen since last year. On the flip side, the M1 chip inside the iPad Air 5th Gen has a Multi-Core score of 7140 (as per Geekbench), which is approx. 79% higher than the A14 Bionic. The iPad Air 5th Gen is clearly an industry-leading performance beast when it comes down to raw performance, all thanks to the powerful M1 chip which is also found inside some powerful Apple devices like Macbook Air (2020), 13-inch Macbook Pro, and more.

Both the iPad 10th Generation and iPad Air 5th Gen (from now onwards) come with iPadOS 16 preinstalled. Therefore, you’d expect a similar software experience on these devices. Having said that, the iPad Air comes with Stage Manager – a multitasking tool, which lacks on the iPad 10th Gen.

Camera position changes but megapixels are still the same

The iPad Air 5th Gen and iPad 10th Gen come with similar camera specs. Both feature a 12MP front-facing and rear camera. The only difference between both cameras is their position. Apple has positioned the front camera of the iPad 10th on the larger part of the display (landscape camera position). While the iPad 5th Gen’s front camera has a top-center position on the shorter side of the display.

As the price is one of the vital factors to conclude buying decision between iPad 10th Gen and iPad Air 5th Gen, let’s talk about it. The iPad 10th Gen is affordable and has a starting price of £499/$449 for the Wi-Fi model, whereas the Wi-Fi model of the iPad Air 5 starts at £669/$599. Both the iPads are available in Wi-Fi and Cellular models though.

Let’s be honest, iPad Air 5 is expensive but is clearly understandable with the M1 chip, support for Apple Pencil 2nd Gen and more features that it brings. Whereas the affordability of iPad 10th Gen comes with several tradeoffs. You won’t find the powerful processor, support for Apple Pencil 2nd gen, and other features that you’re likely to see on the iPad Air. You’ll be glad to find that the iPad Air 5th Gen can be found on Amazon & BestBuy for somewhere between $500-$550 USD. Now, that’s a deal you shouldn’t miss.

iPad 10th Gen vs iPad Air 5th Gen: Which one should you buy?

If you are an occasional user of a tablet who likes to browse the web, chat with friends, play games once in a while, or look forward to enjoying media content on a larger display, it’s best to stick with the iPad 9th Gen (if you have one). Suppose you want to upgrade to something modern and colorful for the same purpose and are willing to spend a few extra bucks, the iPad 10th Gen won’t bite, for sure. Having said that, we are not really recommending you switch to the new one because of the significant price hike. If you are still happy with your 9th Gen, or even 8th Gen iPad, we recommend you stick to it.

In case you have the budget and need something to cater to content creation both beginning or professional or your daily casual workflow, we recommend buying the iPad Air 5th Gen. In short, you’ll be spending an extra 25% to get 75% better performance than the 2022 iPad 10th Gen. Furthermore, it also supports 2nd Generation Apple Pencil, offers a noticeably better display which means you can create masterpieces all day long.

Don’t miss: 37 Super-saver Black Friday Deals 2022 that are worth grabbing