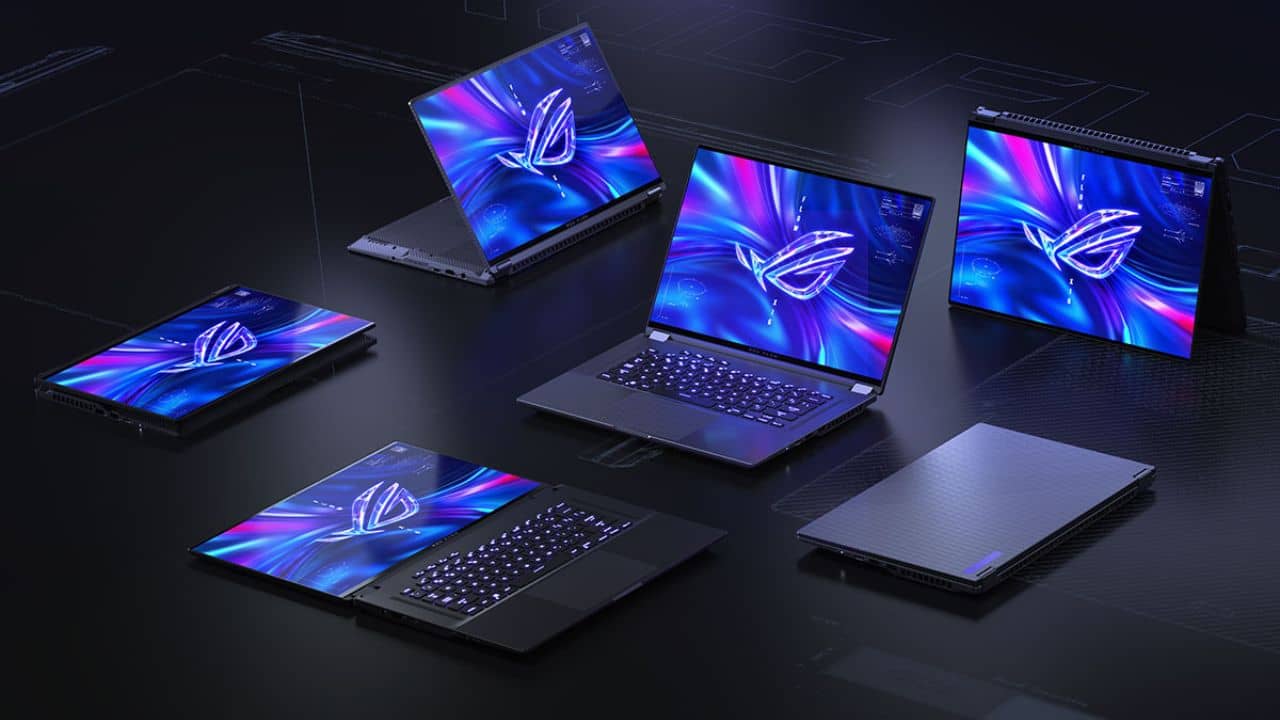 Asus has recently announced several ROG Gaming monitors and the ROG Strix lineup of gaming laptops at CES 2023. Aside from these announcements, we also witnessed the launch of the latest lineup of the ROG Flow Series which includes three different models: X13, X16, and Z13. All of them are refreshed with several hardware upgrades, we’ll talk about all of them in this article. Keep reading.

The ROG Flow X13 is the first and the smaller member of the Flow X series convertible laptops. It is available in either an FHD 120Hz or a QHD 165Hz 13.4-inch Nebula Display with a peak brightness of 500 nits. Both feature a touchscreen and have an aspect ratio of 16:10. You’ll also find a 360-degree hinge in this gaming laptop, allowing it to live up to the ‘convertible’ tag so you can use it in four different modes. You can use it in stand mode, tent mode, as a tablet, and laptop. It gives you the freedom to use the laptop anywhere and everywhere you’d want.

Asus says that this gaming laptop is powered by AMD Ryzen 9 7940HS processor and up to an NVIDIA GeForce RTX 4070 Laptop GPU. It also comes with preinstalled Studio Drivers and exclusive tools for creators. As far as memory and storage are concerned, the ROG Flow X13 is available with up to 32GB LPDDR5 RAM and up to 1TB PCIe 4.0 NVMe M.2 SSD storage. In addition, there is a 1080P FHD IR webcam and Backlit Chiclet Keyboard. Let’s not forget that the laptop will have Smart Amp Technology, Dolby Atmos, and AI noise-canceling technology. The most highlighted part is the battery and charging. The laptop comes with a battery backup of 75WHrs and is shipped with 130W AC Adapter with type-C connectivity. Further, Asus ships this convertible laptop with a free 3-month Xbox Game Pass Ultimate and Wi-Fi 6E compatibility.

Also read: Razer Blade 16” and 18” are every gamer’s dream laptop

Alongside the 13-inch ROG X13, Asus also announced refreshed versions of ROG X16 and Z13 convertible laptops. As far as specs are concerned, the ROG X16 and Z13 series feature QHD+ Nebula Dolby Vision HDR Display of 16-inch and 13.4-inch, respectively. The X16 series comes with a 240Hz screen refresh rate, 3ms response time, Adaptive-sync technology as well as MUX Switch and NVIDIA Advanced Optimus. On the other hand, the Z13 2-in-1 gaming laptop comes with a 165Hz refresh rate and 7 ms response time, but the other features remain the same.

The ROG X16 and Z13 also come with Smart Amp Technology, Dolby Atmos, and AI noise-canceling technology just like the X13 2-in-1 lineup.

As we write, we don’t know anything about the price of all the models from the Flow convertible series. But, time will tell whether the upgrades are worth the expected sky-high price tag.

That’s all for now, don’t forget to check our news piece about Asus’ new ROG Strix G and Strix Scar gaming laptops that were also announced at CES 2023.