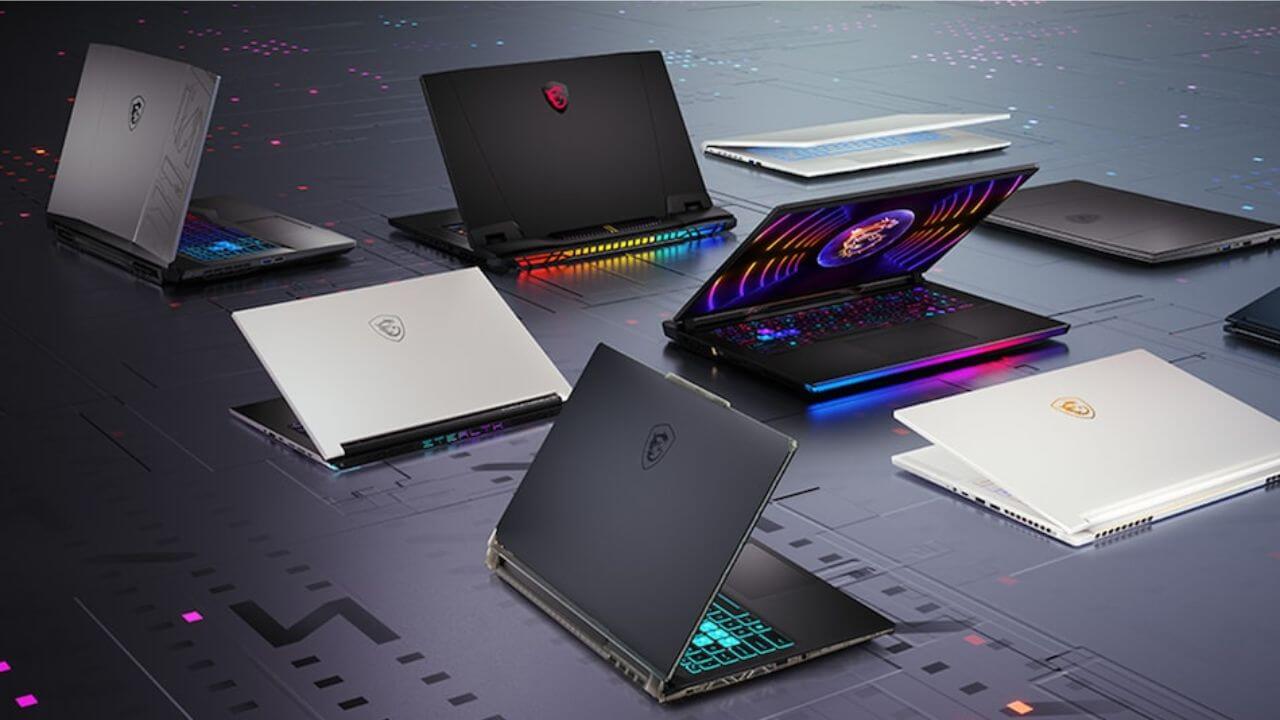 Here’s everything we know about the latest MSI gaming laptops. Let’s have a look.

Designed to be a desktop replacement, the MSI Titan GT77 HX runs on the powerful combo of Intel Core i9-13980HX Processor and NVIDIA GeForce RTXTM 4090 with 16GB VRAM for industry-leading performance. Moreover, this MSI flagship gaming laptop utilizes MSI’s OverBoost Ultra technology that can push the processors and graphics to a 250W power draw or support 5.2GHz frequency across 8 Performance cores depending on workload. The insanely-capable MSI Titan GT also rocks the world’s first 4K Mini LED display with a 144Hz refresh rate and 1,000 nits of peak brightness with over 1,000 local-dimming zones. The stunning 0.91-inch thick chassis comes with a projective mystic light bar, a Cherry MX Ultra Low Profile mechanical keyboard, and Cooler Boost Titan with 4 fans and 8 pipes to keep everything running cool.

It’s worth mentioning that Intel uses the MSI Titan series to showcase its flagship chips. Now, that’s because these laptops have the ability to unleash the true power of these top-of-the-line processors. So, you can expect a shockingly great performance and a similar price tag.

Just like the MSI Titan GT77, MSI Raider GE78 is one of the most spec-intensive models offered by MSI. This 2023 MSI laptop is packed with some of the best and most capable hardware available on any gaming laptop. The powerhouse features an Intel Core i9-13980HX Processor and NVIDIA GeForce RTX 4090 GPU for top-of-the-line performance. It also boasts a tweaked chassis design with a nice selection of ports, a jaw-dropping 240Hz refresh rate, a physical camera shutter, and an AI Cooling system. One of the most eye-catching features of MSI Raider GE78 is the customizable Matrix RGB light bar that allows gamers to show off their style. It adds those retro vibes in the most cyberpunk style. Unlike the 4K Mini LED display on Titan GT77, Raider GE78 comes with a QHD+ resolution at 240Hz.

The new MSI Stealth Series will come in 15-inches, 17-inches, and newly designed Stealth 14 Studio and Stealth 16 Studio models. The Stealth 14, 16, and 17 Studio are Nvidia Studio-validated laptops designed to suit content creators. Talking about the Stealth 15 Studio, it brings a 240Hz OLED display with less than 0.2 ms response time and 100% DCI-P3 Gamut coverage.

The Stealth 16 Studio is an ultra-thin, lightweight, & capable laptop that features a vibrant 16:10 QHD+ 240Hz display for buttery smooth gaming and VR experiences. The Magnesium Aluminum Alloy chassis and a newly designed thermal system with 2 fans and 5 heat pipes deliver a cool performance even under intensive workloads. Adding to the overall design is the catchy Stealth logo at the back. The MSI Stealth 16 Studio is equipped with the latest 13th Gen Intel Core processors and up to NVIDIA GeForce RTXTM 4070 laptop GPU with 8GB GDDR6.

Coming to the Stealth 14, it offers similar specifications and performance in a smaller chassis. Impressively, the Stealth 14 is equipped with two user-replaceable RAM slots. Additionally, there’s a vapor chamber across the CPU & GPU so you can enjoy cool & silent marathon gaming sessions. This 14” gaming laptop is available in a unique colorway featuring a contrasting smokey white exterior and a black-out interior. Additionally, you’ll find a playful Stealth logo at the back that enhances the overall design.

Next up on the list is the exciting, entry-level gaming laptop, MSI Cyborg 15 which offers a nice performance jump as compared to its predecessor. It features a 12th Gen Intel processor paired with NVIDIA GeForce RTX 4060 GPU. We must say, MSI has played very smartly here. By cubbing the last year’s CPU with the latest GPU, MSI would allow its users to experience a nice performance boost without burning a hole in their pockets. Cyborg 15 has a solid build quality with an aluminum on-top panel and translucent chassis components reminiscing cybernetic-like trims and language. The overall design resembles sci-fi fashion and the teal-blue backlighting on the keyboard enhances the overall look & feel of this gaming laptop. In short, MSI Cyborg 15 is an excellent option for gamers who need an affordable gaming laptop that doesn’t look ugly and offers next-gen performance.

Apart from these models, MSI also refreshed its Katana, Pulse, and Sword series laptops, which now have a MUX switch.

The MSI Titan and Raider Series will be available in mid-February with Stealth & Cyborg models hitting the market later that month.

Recently, Alienware also introduced its newest lineup of gaming laptops at CES 2023. It showcased a slew of impressive hardware with 13th Gen Intel Core i9 processors, NVIDIA GeForce RTX 4090 Laptop GPU, and other surprising upgrades. It will be interesting to see the two major players of the gaming world competing with each other with their next-gen gaming laptops. Not to forget, Acer also announced some heavy-duty gaming laptops at CES 2023. We just can’t wait to see how these top-of-the-line offerings amaze gaming enthusiasts.