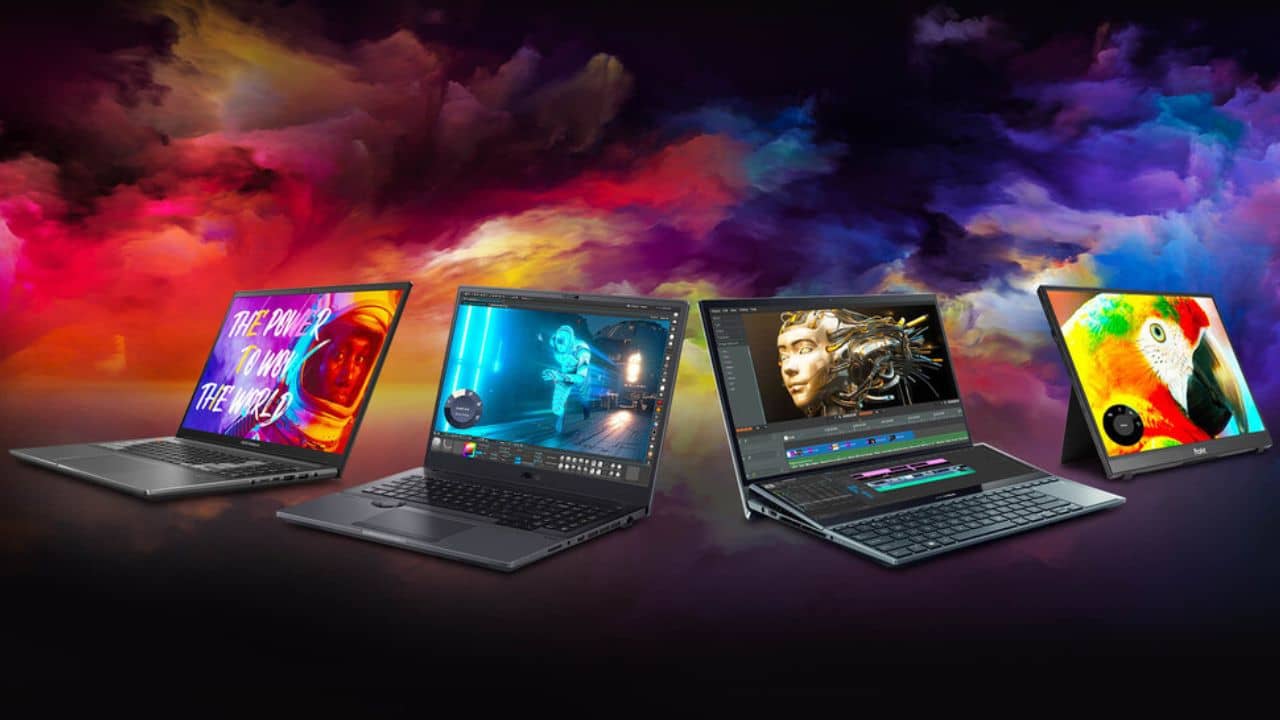 On January 5, Asus announced a range of new laptops at CES 2023. The laptops unveiled at the global tech event include a few options that boast 3D OLED laptops. Some of Asus 3D OLED offerings include the ProArt Studiobook 16 3D OLED (H7604), Zenbook Pro 14 OLED (UX6404), Zenbook 14X OLED (UX3404), and Vivobook Pro 16X 3D OLED (K6604). If you have missed the coverage, we have talked about all the laptops below. Keep reading.

The Asus ProArt Studiobook features a 16-inch 3D OLED laptop with a 120Hz refresh rate and a resolution of 3200 x 2000 pixels. The company says that this creator laptop gives users 3D visuals without any glasses or headset. This has been possible with the integration of Asus’ Spatial Vision technology which is said to convert 2D visual content to 3D in real time. Asus also backs this laptop with adaptive dimming technology to curb eye fatigue, maximizing screen time. Besides, the ProArt Studiobook packs the 13th Gen Intel Core i9-13980HX processor, which comes alongside the NVIDIA GeForce RTX 40 series laptop GPU for top-notch performance. This creator laptop is offered with up to 64GB RAM and has Asus IceCool Pro thermal technology built-in to enhance the overall thermal performance. Further, you’ll find a stylus-compatible haptic touchpad and the Asus Dial rotary control in this laptop.

Asus Vivobook Pro 16 is another laptop in the lineup that comes with a 16-inch glasses-free 3D OLED screen with 3200 x 2000 pixels resolution and a refresh rate of 120Hz. This 3D OLED laptop is offered with up to 2TB PCIe 4.0 x4 SSD, and 64GB DDR5 4800MHz RAM. It uses the same processor and GPU as the ProArt Studiobook 16 3D OLED. In addition, this laptop has a MUX Switch and NVIDIA Studio Driver for an on-demand performance boost. Plus, Asus Vivobook Pro 16 3D OLED is also backed by Asus IceCool Pro thermal technology and the Asus DialPad for precision creative control. Further, it includes two Thunderbolt 4 ports that can offer a transfer speed of up to 40 Gbps and has a regular SD card slot.

Asus also released a 14-inch Zenbook series at CES 2023. The lineup includes two OLED laptops: Zenbook Pro 14 and Zenbook 14X. As far as the pro model is concerned, it comes with a 14-inch OLED screen with a 120Hz refresh rate and 3200 x 2000 pixels resolution. This laptop is powered by Intel’s 13th Gen i9-13900H processor, with the same GPU from Zenbook 16X OLED. The laptop will be available with up to 16GB DDR5 RAM, with a SO-DIMM memory expansion slot of up to 32GB. Talking of storage the Zenbook Pro 14 OLED comes with a 2TB SSD. Let’s not forget that this laptop supports Dolby Vision and has DialPad for app control and Pen 2.0 support.

Talking of the Zenbook 14X OLED, you’ll see a 14.5-inch display with a 2880 x 1800 pixels resolution and 120Hz screen refresh rate. This laptop flaunts a thin and compact design that is easy to carry anywhere. The 2023 laptop is available in Sandstone Beige and Inkwell Gray colors. It is powered by the 13th Gen Intel Core i9-13900H processor, paired with NVIDIA GeForce RTX 3050 laptop GPU. The Zenbook 14X has 32GB of LPDDR5 RAM and 1TB PCIe 4.0 SSD storage.

Next, the laptop from Asus’ CES 2023 announcement is the ExpertBook B9 OLED. This laptop sports a 14-inch 2.8K OLED screen with an aspect ratio of 16:10 and a 120Hz refresh rate. This 14-inch OLED laptop comes with up to 13th gen Intel Core processor with vPro for enhanced performance. Further, it features an intelligent cooling system that includes dual fans with smart dust removal to reduce the noise of the fan. As far as security and privacy are concerned, this OLED laptop comes with a Kensington lock slot, face login, and NFC login. The laptop also comes with a physical webcam shutter and a fingerprint sensor. There are a number of ports including Thunderbolt 4 ports, USB-C 3.2 Gen 2 ports, HDMI 2.1 ports, a combo audio jack, and a LAN port.

The Chromebook Vibe CX34 Flip features a 14-inch touchscreen display with a 1920 x 1200 pixels resolution and 144Hz screen refresh rate. It is powered by a 12th Gen Intel Core i7 processor and comes with up to 16 GB LPDDR4X RAM. Talking of storage, you’ll be able to choose this laptop from the available 128GB, 256GB, or 512GB M.2 NVMe PCIe 3.0 SSD options. Asus claims that this laptop has a battery backup of up to 10 hours on a single charge. Further, the Chromebook comes with a Harman Kardon-certified spatial audio speaker, an anti-ghosting keyboard, four-zone RGB lighting, and Wi-Fi 6E support. Moreover, if prefer console-level gaming Chromebook XC34 Flip gives you access to over 1000 games via cloud gaming platforms like Xbox Cloud Gaming and NVIDIA GeForce NOW.

Asus unveiled many gaming laptop lineups at CES 2023 and the TUF Gaming A16 Advantage Edition was among them. It includes three different models. The FA617NS and FA617XS models sport a 16-inch FHD+ display with a 240Hz refresh rate and 3ms response time. Whereas the top-end model, FA617XT, features a 16-inch QHD+ display with 240Hz refresh rate and 3ms The base model (FA617NS) is powered by Ryzen 7 Zen 4 CPU with Radeon RDNA3 GPU and AMD Smartshift Graphics. Whereas the other two models (FA617XS and FA617XT) are powered by Ryzen 9 Zen 4 CPU. All three laptop comes with up to 2TB PCIe 4.0 NVMe M.2 SSD storage and a maximum 32GB DDR5-4800 SO-DIMM. Moreover, there are a plethora of input-output ports in all three of them.

Asus has also revamped the TUF F15/17 and TUF A15/17 MIL-STD-810H Standards gaming laptops with major performance boosts. The TUF Gaming F15/17 features up to Intel Core i9-13900H processor, whereas the TUF Gaming A15/17 feature up to AMD Ryzen 9 Zen 4 processor. Asus says that with the help of AI tech like Deep Learning Super Sampling (DLSS 3.0), the games can even run at a higher frame rate for the best experience. All four models feature up to Nvidia GeForce RTX 4070 Laptop GPU and MUX Switch with NVIDIA Advanced Optimus. Moreover, all the models come with 84 blades Arc-Flow Fans and 4 exhaust vents to curb the heat.

That’s all for now in this rundown of an exciting lineup of Asus announced at CES 2023. If you are looking for ROG Gaming laptops, don’t forget to read our separate new article for the same.