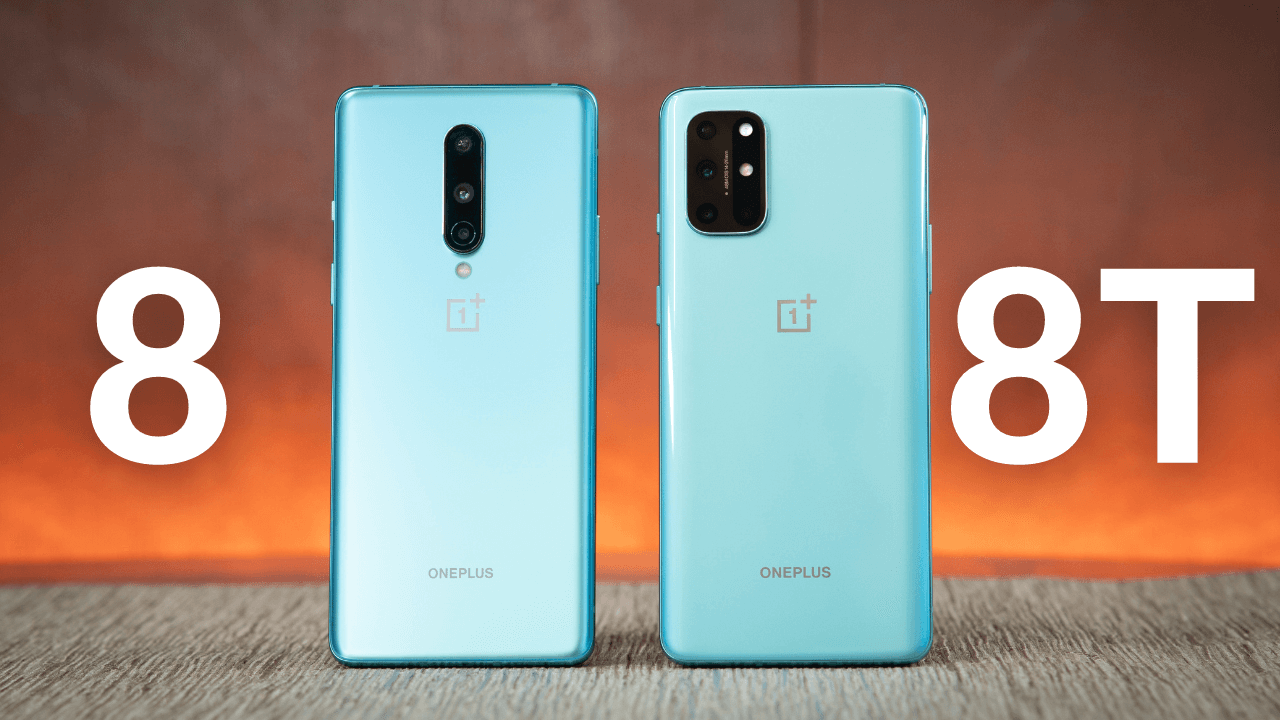 While the OnePlus 8 has been around for around 6 months now, the OnePlus 8T is the new kid on the block packing a newer and improved set of features. But newer isn’t always better and old isn’t always gold. So let’s find out today, which of these 2 phones makes for a better buy, especially because they’re priced so similarly. 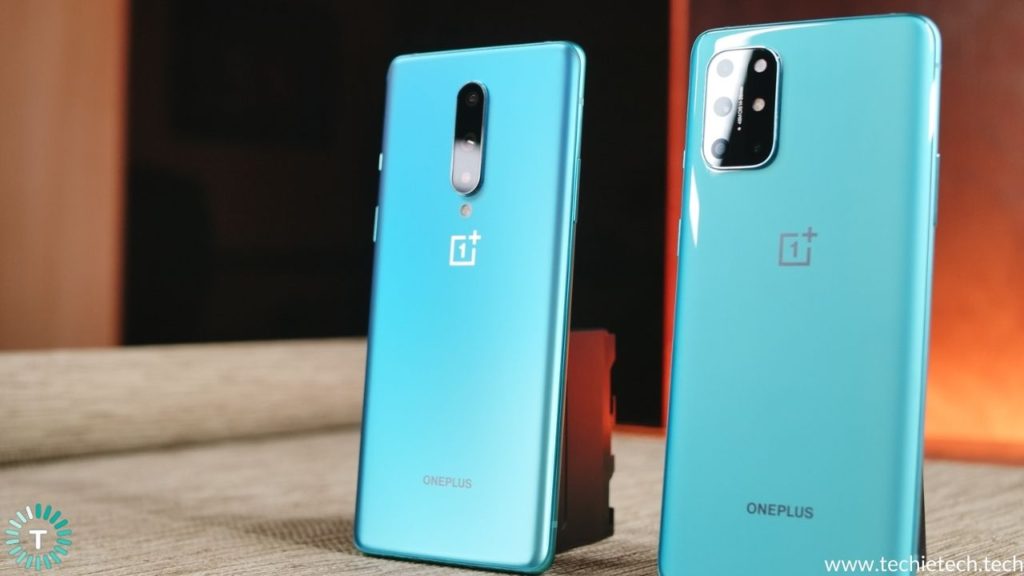 Flipping over to the display, the OnePlus 8T has a flat panel while the OnePlus 8 has a curved one. While the curved panel looks more premium and flagship-like, I simply cannot deny the practical benefits of having a flat display. For starters, there are no accidental touches. Then, there is no glare on the sides when you’re watching video, screen protectors are easier to find and the list just goes on and on. Flat screens on flagship phones are slowly fading away and I am so happy that OnePlus kept them alive by including a flat panel in the OnePlus 8T. 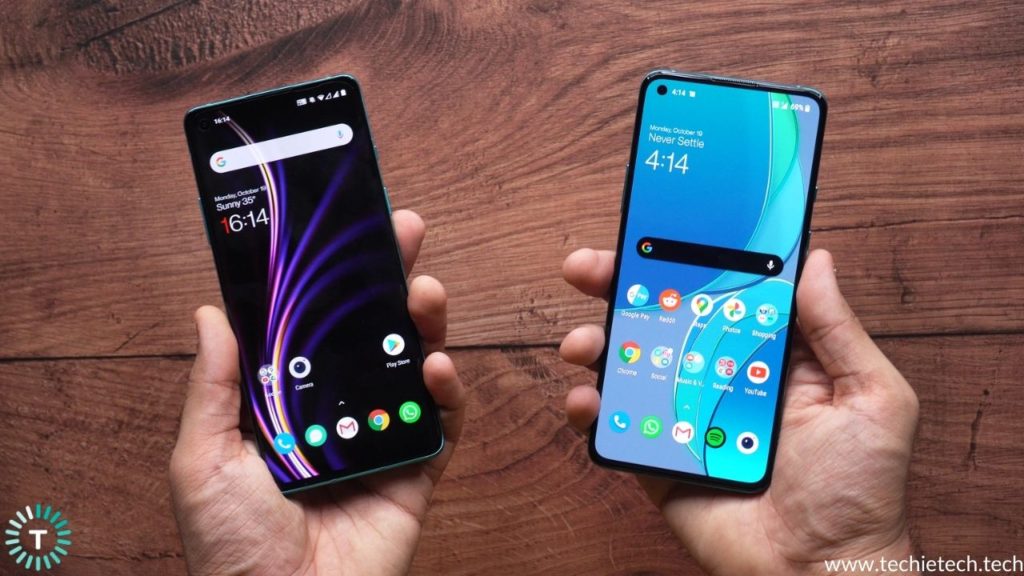 But what about the actual quality of the displays. Things couldn’t be more similar here. Both these phones have the same diagonal screen size, same resolution, same pixels per inch and almost the same screen to body ratio. The only noticeable difference is that the OnePlus 8T has a higher refresh rate at 120 Hz compared to the OnePlus 8 at 90 Hz. Frankly, that’s not much of a difference in real world use. Jumping from 60 Hz to 90 Hz was huge but 90 to 120 is not that big. But hey, since both these phones are priced very close to each other, we’ll pick the 120 Hz because you’re not paying much more for that upgrade anyway.

But actual colour quality wise, both these phones have stunning displays. Remember how Samsung used to be the King when it came to displays and no one even came close.  Well, use the OnePlus 8 or the OnePlus 8T and you will realise that OnePlus did come quite close. The displays are stunning to look at with sharp and crispy details, excellent colours, and incredible vibrance. What’s more, both these phones are free of issues like black crush, red tint and more that are found on the larger OnePlus 8 Pro. OnePlus has really done a good job with both these displays.

Let’s talk about the software and performance section. Frankly, there is absolutely nothing to compare here. Much like the displays, both the OnePlus 8 and OnePlus 8T have more similarities than differences here. In this particular case, the only hardware difference is that the OnePlus 8T has UFS 3.1 storage compared to the UFS 3.0 on the OnePlus 8. Apart from that, both of these phones have the same Snapdragon 865 CPU, Adreno 650 GPU running over the exact same software. It is at times like these, that while I write this review, I wonder why did OnePlus even make the 8T when they already had the super similar OnePlus 8. 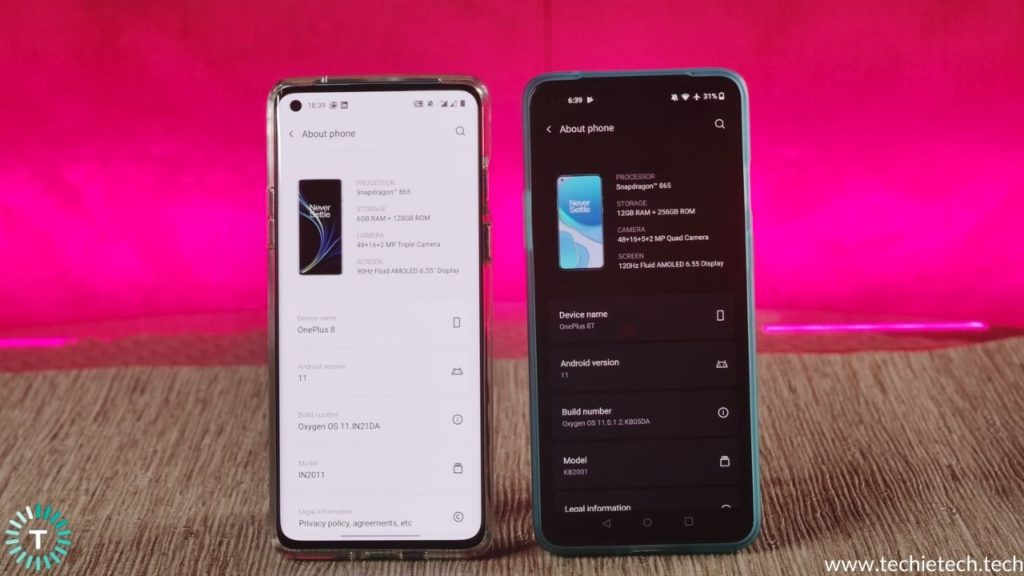 Anyway, I have used the OnePlus 8 on Oxygen OS 11 extensively and I have been using the OnePlus 8T for a few days now and the differences are negligible. Frankly, it’s like a race between 2 sports cars, except that both the cars have the same specs and the same driver. Now that we’re done with this shoddy analogy, the point is that both these phones are crazy fast. With their best in class flagship internals and the quick animations of OxygenOS, both these phones absolutely race through everything you throw at them, be it day to day stuff like WhatsApp and Instagram or heavier stuff like Call of Duty and Adobe Rush. If you’re wondering which phone to pick out of these two, my first piece of advice would be “Don’t try to pick on the basis of performance because you simply can’t.” 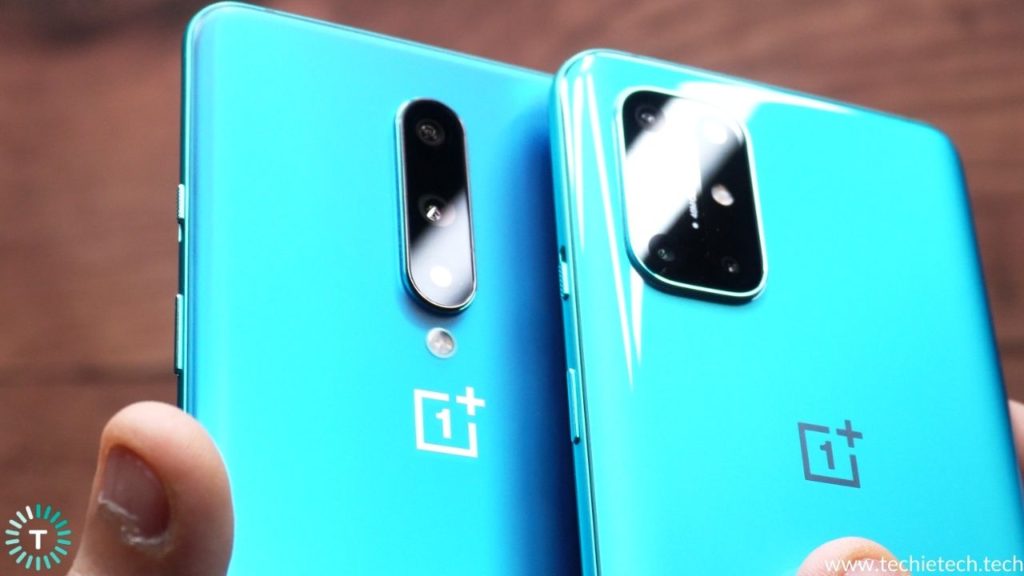 The major difference between OnePlus 8T and OnePlus 8 is the design and placement of the rear camera module. Optically, both devices sport the same sensors except an all-new 2MP Monochrome camera module on 8T.  Also, for some reason the OnePlus 8T has an extra flash. Anyway, let’s compare the photos first and then the videos.

As mentioned earlier, the OnePlus 8T and OnePlus 8 sport identical camera hardware and software. Moreover, both cameras are capable of shooting really good pictures and videos and have their set of minor inconveniences like software bugs. But, if you’re looking for a smartphone camera for both casual and professional use, you can’t go wrong with either of them since the camera experience provided by both of them is largely the same.

Talking about the battery life, we have a 4300 mAh battery in the OnePlus 8 compared to 4500 mAh on the OnePlus 8T. The OnePlus 8 has good battery life. Easily lasts a day on mid to heavy use and can be stretched to a day and a half without much effort. Roughly 5 to 5.5 hours of screen-on-time. Talking about the 8T, the battery life seems slightly better with roughly 30 more minutes of SOT. But look, the OnePlus 8 I have here is a 4-5 month old phone and the 8T here is brand new so maybe that difference is because of the fresh battery in the 8T compared to the 5 month used battery pack on my OnePlus 8. 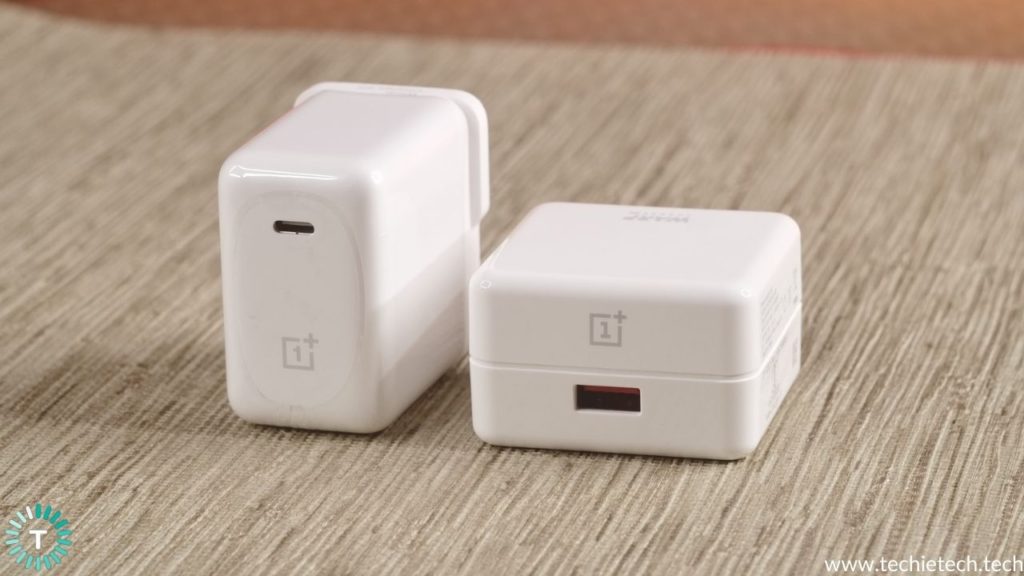 Now, OnePlus has managed to do this by including 2 battery packs which charge simultaneously. What that means for the long term battery health is still unknown and only time will tell how this battery fares in the long run.

But all in all, it is just great that companies like OnePlus are including better and better charging technologies in the box with every new generation of their phones when companies like Apple with twice or thrice as expensive phones are even removing that terrible 5W charger that they used to give.

When we talk about biometrics, it is the same story. Great optical fingerprint unlock that works equally well on both the phones.

One tiny difference I did notice is that the haptics and speakers were slightly better on the OnePlus 8T. Not a huge difference, but a noticeable one, anyway.

Let’s talk about the phone call experience. I actually got unexpected results here. While the earpiece quality, loudspeaker and mic quality on both the phones is largely the same, I found that the OnePlus 8 held onto a signal better than the OnePlus 8T. I don’t know if it was an isolated finding in my network coverage conditions but at the same spot, the OnePlus 8 seemed to get stronger signals compared to the OnePlus 8T. This is not something that altered the experience of using these phones, just an observation that I thought I should share.

OnePlus 8T vs OnePlus 8: Which one should you buy?