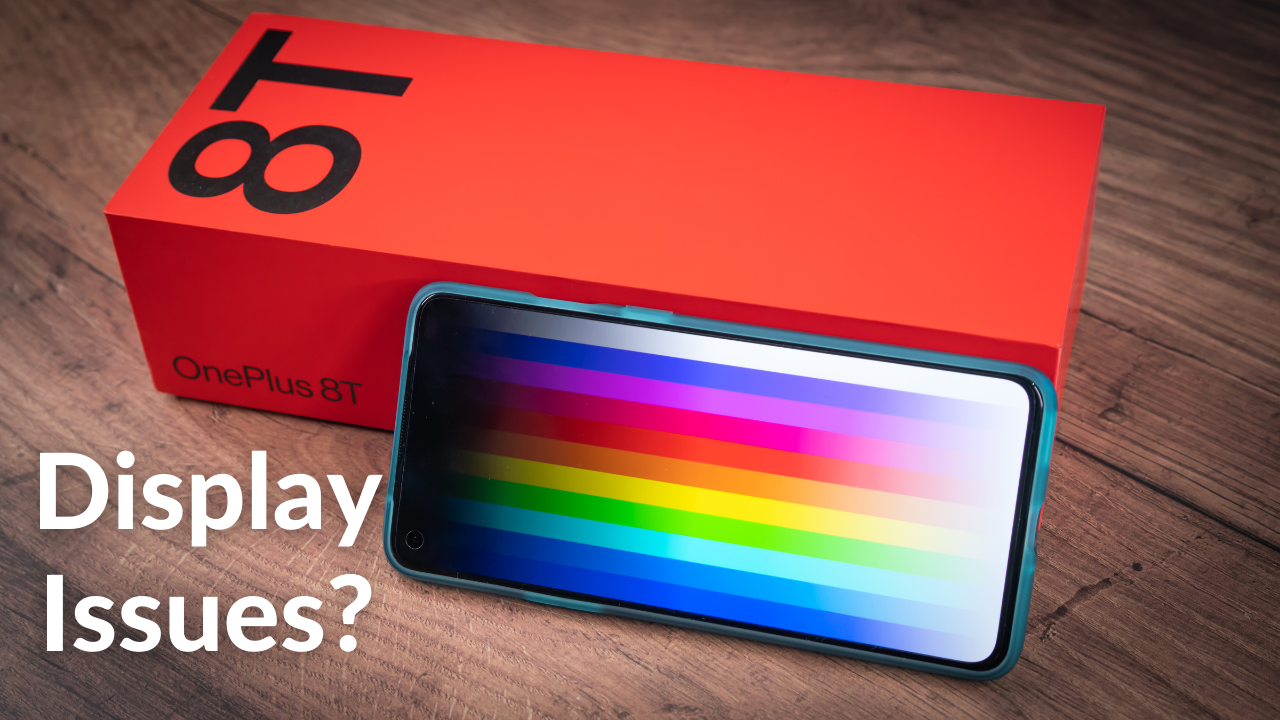 It all started in the beginning of the year 2020. OnePlus launched the OnePlus 8 Pro. Fans were excited. This was the most expensive and most fully featured OnePlus phone yet. Expectations were through the roof. But then, it all came crashing down. A number of issues were reported on the OnePlus 8 Pro’s display panel ranging from significant black crush to the selfie camera hole banding to red tint. Everything for OnePlus had changed forever.

Okay, that was a bit dramaticized but you get the feeling. OnePlus recently launched the OnePlus 8T and I have got a ton of people asking me whether the 8T suffers the same fate as the 8 Pro, especially because both of these phones have 120 Hz panels. Let’s find out.

The Display Problem with OnePlus 8 phones

Taking a trip down the memory lane, the OnePlus 8 Pro had severe issues with black crush and then there was the grey banding issue with the selfie camera hole cutout and some users also reported a significant red or green tint when they watched content at low brightness. A Lot of theories were floating around claiming that OnePlus would fix the issues with software updates or in the latest hardware batch but I don’t think that happened. If anything, I have just learned to ignore them on my OnePlus 8 Pro.

Well, the OnePlus 8T is here and a lot of people including me are wondering if the phone has the same or different display issues. In my general usage of about 4-5 days till now, I haven’t really noticed any issues. So let’s go into a dark room, turn down the brightness levels and look deep.

Let’s start off with the selfie camera black bar issue. I tested the phone again and again with pitch dark environments and low brightness levels. I tested it on different shades of grey but I just  could not reproduce this issue on the OnePlus 8T. No matter how hard I looked, how much I tried, this issue could not be seen. So safe to say, the OnePlus 8T does not have the selfie cutout banding issue. It is such a relief because I believe this is the most widespread issue on the OnePlus 8 Pro.

Moving on, I checked for the black crush or any other uniformity issues. Now the thing with black crush is, it is not consistent or not just there for you to see. There are a lot of variables like the colors appearing on your screen, the brightness levels, the content that you’re watching and so on. Well, I am happy to report that my particular unit of the OnePlus 8T exhibited almost 0 black crush. And this is with extremely thorough testing. It is much, much lesser compared to the OnePlus 8 Pro. Even my old OnePlus 7 Pro had some visible black crush but with the OnePlus 8T, it is basically non-existent.

Talking about the red or green tint, this is basically an issue with the colour science of your display. A green or red shade is prominent over everything you see. Luckily, I have had no device which had this problem. The OnePlus 8T is no different. Be it bright white tones or dark mode or HDR content, I could not catch any tinting issues and the content always seemed fine.

Lastly, there were some talks about Screen Burn in. The thing about Screen Burn-in is that it is a problem with every OLED display in which shadows of some display objects tend to get permanently burned into the display. But this happens after a usage of multiple years. On the OnePlus 8 Pro, it became a serious issue because a lot of people were noticing burn in only after a few weeks of usage. Well, I have not spent that much time with the OnePlus 8T so I cannot comment on this yet but if a burn-in issue does appear, I will let you know.

Did you get a OnePlus 8T? See, it is quite possible that my unit here is defect free and you may be seeing one of these or maybe different display issues. If that is the case, do let me know in the comments section below and I will test it on my unit. Until then, I hope you found this helpful.