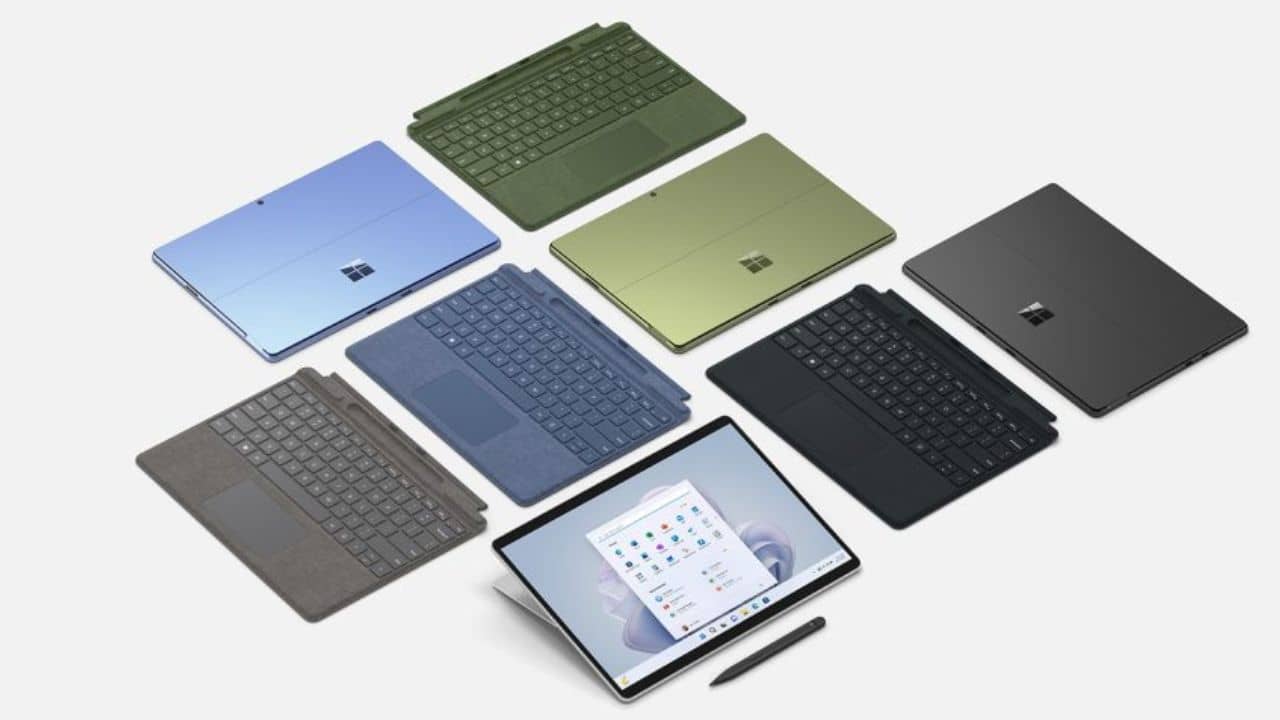 Microsoft unveiled the Surface Pro 9 at its Fall Event 2022. Unlike the past decade, the tech giant has combined the Surface Pro X and Surface Pro into a single product, Surface Pro 9, this time around. For the very first time since it introduced the Surface 2-in-1, Microsoft now allows you to pick between their in-house SQ3 processor (developed in collaboration with Qualcomm) and 12th Gen Intel Core processor. It is a vital move from the company, which previously offered different designs for the different chipsets. That’s not all, you can even choose colors of the Surface Pro 9 exteriors and not just the Type Cover that you could choose before the announcement. Unlike every year, you’d find it difficult to choose between processors as it will lead to few tradeoffs. That’s because Microsoft is not offering 5G compatibility in the model that has an Intel processor. Instead, the Surface Pro 9 with Microsoft’s SQ3 processor will feature built-in 5G. Let’s dive in to read more about Surface Pro 9 vs Surface Pro 9 5G and which one you should get.

The Surface Pro 9 looks identical to the Surface Pro 8 and Surface Pro X, featuring rounded corners and an anodized aluminum body. The standard Surface Pro 9 features a 2880 x 1920 PixelSense Flow display with dynamic refresh rates of up to 120 Hz. Microsoft packs Intel’s 12th Gen U series processors: Core i5-1235U or Core i7-1255U, whereas the business models feature i5-1245U or i7-1265U inside. The Surface Pro 9 will support up to 32GB of LPDDR5 RAM, whereas you’ll get a maximum of 1TB SSD storage, clearly more than the 5G model, which tops out at 512GB. On its sides, the Surface 9 Pro has two Thunderbolt 4 ports and a proprietary Surface Connect port.

There are a few differences that make the Intel option look better on paper. For instance, the Intel-powered variant comes with Dolby Vision IQ support, and auto color management, which lacks in the ARM version. Let’s not forget it comes with a FullHD webcam on the front and a 10MP camera on the back. It also comes with Wi-Fi 6E compatibility but has a battery life of 15.5 hours, which is relatively lesser than the Surface Pro 9 5G’s 19 hours.

The 5G model also has the same camera specs, it comes with an FHD front-facing webcam and a 10MP camera on the rear. It is also Wi-Fi 6E compatible and has a relatively long battery life of 19 hours. The Surface Pro 9 with 5G has USB-C 3.2 port and a nanoSIM slot. It has an eSIM option, while it comes with 5G and support for LTE too.

The company says that both the models of Surface Pro 9 will be shipped with the same Surface Pro Signature Keyboard and will support the Surface Slim Pen 2. We also got to know that to celebrate 10 years of Surface devices, Microsoft has partnered with Liberty, a UK-based designer. Therefore, you’ll have the option to go with the limited edition floral keyboard cover that resembles the Windows 11 “Bloom.”

The company offers both the Surface Pro 9 devices with platinum color. Whereas the graphite, sapphire, and forest green colors are exclusive to the Intel model only.

It’s obvious that the Intel version looks powerful on paper, but it would be interesting to see what the future holds for both devices. If we get our hands on these devices, we will be dropping a review on our YouTube channel, please make sure to subscribe to it.