Why your favorite smartphones will be more expensive after lockdown 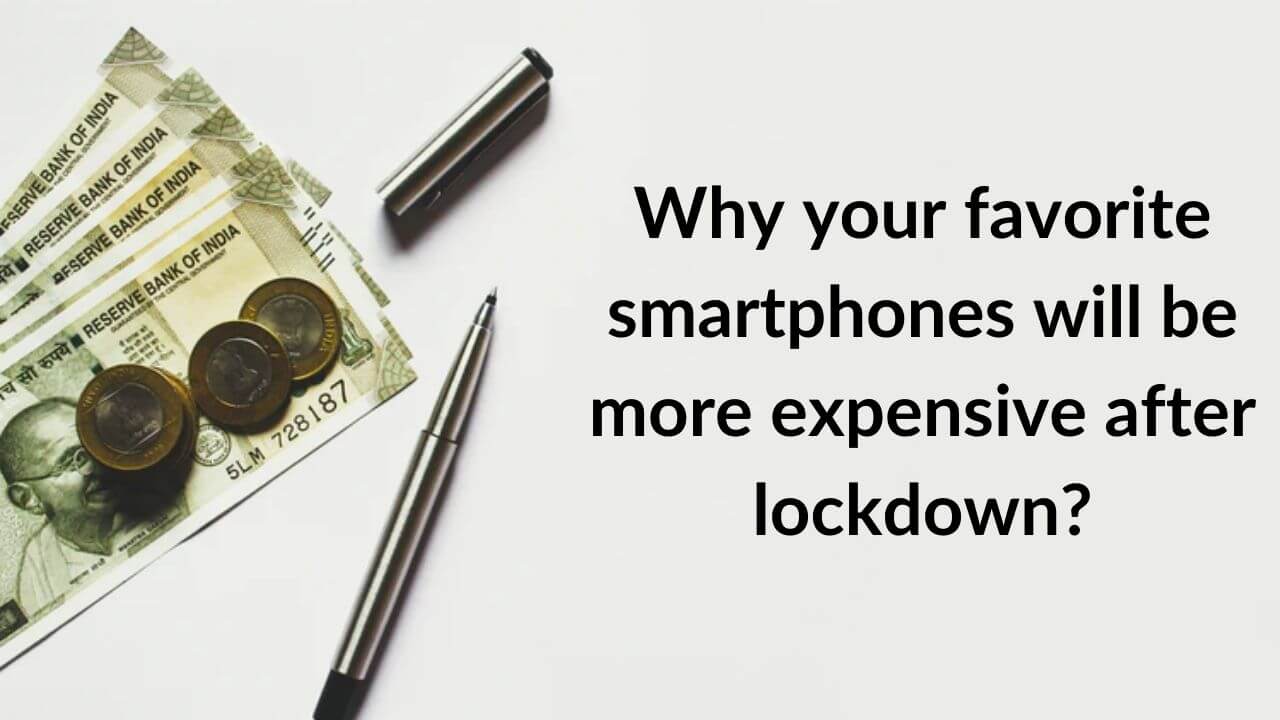 India is considered one of the most competitive markets for smartphone companies. It has almost 400 million smartphone users and a huge potential to onboard new users as well. In fact, India was the only rapidly and positively growing smartphone market across the globe, before the COVID-19 pandemic made a huge and adverse impact on the commercial activities.

The effects of the Coronavirus can be seen in almost every business and industry. In March 2020, despite offering tempting deals and discounts, the e-commerce platform did not manage to reap good sales figures. The businesses have been hit worldwide, manufacturing units have been shut, hitting supplies as well as demands more than ever before. Now, when India is under lockdown, people cannot even think of buying a new smartphone or even get their old phones repaired.

Many users would be badly waiting to buy a new smartphone once the lockdown ends. But, just keep in mind that things won’t be the same as before. So, it’s better to prepare yourself for some major changes once all the industries resume their regular operations. Firstly, it would take some time for the supplies to be in abundance. Secondly, and more importantly, consumers have to brace themselves for the price hikes in smartphones.

Why will the prices of smartphones increase in India?

Many customers would be thinking that they’ll have to pay more money for their favorite smartphone post the lockdown only because of the COVID-19 outbreak. However, this isn’t the prime cause. In March 2020, India’s Finance Minister, Nirmala Sitharaman had announced an increase in the Goods and Services Tax (GST) on smartphones and specific parts by 50%.

The new applicable GST is 18%, which has been raised from 12% and came into effect from April 1, 2020. The GST has been revised for the smartphones, despite the depreciating value of the Indian Rupee against the US Dollar, already thin margins, and large competition. The smartphone brands could either choose to absorb the hike made in the GST or pass it on the consumer, which obviously means raising the smartphone prices.

As a consequence of this revised GST and the economic scenario caused by the Coronavirus, almost all the smartphone companies have increased the prices for their smartphones.

Old vs New Smartphone prices after GST Hike in India

Apple had already increased the prices of some of its iPhones post the proposed changes made to import duty in the Union of Budget 2020, which took place in the month of March.  The company had revised the price for the iPhone 11 Pro, iPhone 11 Pro Max, and iPhone 8, making them costlier by Rs 1,300 in India from March 2, 2020. The prices remained unchanged for the iPhones which are assembled in India, including the iPhone 7, iPhone 7 Plus, and iPhone XR. Interestingly, the price of the iPhone 11, the most selling iPhone of 2019 also remained unchanged after the duty hike.

However, things went under a change after the revision in the GST rates. Apple had increased the prices of its iPhones twice in almost a month. First, after the hike in Custom duty and then due to the revised GST. Even the locally assembled iPhones, which escaped the hike in the month of March have become costlier. Now, even the entry-level iPhone is priced above Rs 30,000.

Here’s the list of the iPhones with updated prices:

Samsung had already announced with the launch of its last phone, Galaxy M21 that it will increase the prices of its smartphones according to the revised GST rate of 18%. The prices for Samsung’s latest flagship series- Galaxy S20, S20 Plus, and Galaxy S20 Ultra have been increased between Rs 3,500 to Rs 4,900. Also, the price of the Galaxy Z Flip has been increased by almost Rs 5,900.

Here’s the list of the Samsung phones with updated prices:

Here’s the list of the Realme phones with updated prices

Due to the hike in the GST rates, smartphone companies like Xiaomi and Realme, which used to sell phones at very lucrative prices and thin margins have also increased the prices now. Xiaomi had announced in an open letter that the company is going to take a hike in the prices from April 1, 2020.

After much deliberation & in keeping with #Xiaomi policy of maintaining <5% margin on our hardware products,we will be increasing prices of our products.

New prices will be effective immediately. Thank you! 🙏 pic.twitter.com/mdTqKdXm3r

Also, Xiaomi’s spin-off brand Poco had increased the price of all Poco X2 variants by Rs 1,000.

Here’s the list of the Xiaomi phones with updated prices

According to Mumbai-based retailer, Mahesh Telecom, the prices of top-selling smartphones from Oppo and Vivo have also increased after the revised GST rates. However, Oppo and Vivo did not announce the price hike formally.

Here’s the list of the Oppo phones with updated prices

Here’s the list of the Vivo phones with updated prices

If we talk about the OnePlus phones, there’s no updated list of the prices yet. The latest OnePlus 8 series has been launched on April 14, 2020, and the lineup includes two models, OnePlus 8 and OnePlus 8 Pro. Both the smartphones are 5G as well as Wi-Fi 6 compatible. The Chinese phone maker had shared the Indian pricing for its OnePlus 8 series.

So, yes, your favorite smartphones are going to be an expensive affair after the lockdown. Whichever brand you’re planning to opt for, you’ll have to shell out some extra bucks from your pocket. Do let us know if these increased prices affect your plans of buying a new smartphone or not.

Here’s what the iPhone 8, 8 Plus and X will cost in India