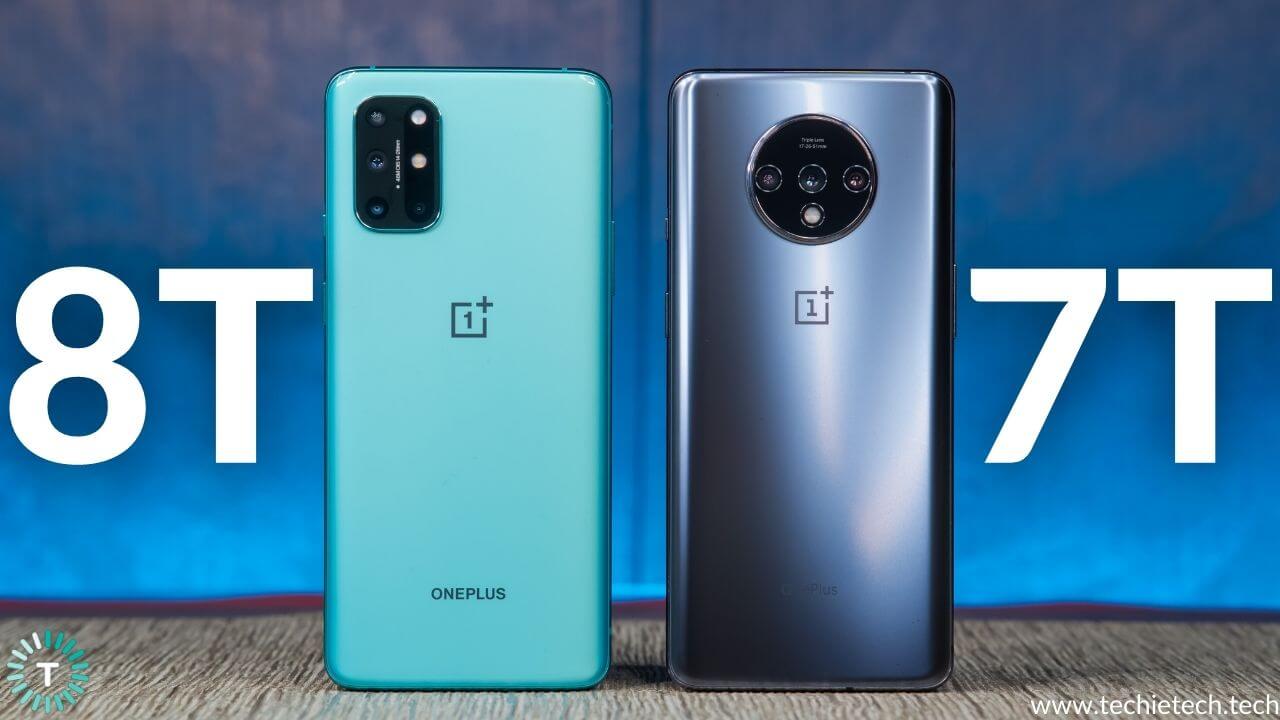 The OnePlus 7T is probably one of the most loved OnePlus phones to date. Although the initial reaction to the huge circular camera bump design was lukewarm at best, customers later warmed up to the OnePlus 7T because of the excellent value it offered. Well, it’s been a year and we have yet another OnePlus phone which got mixed reactions for its design. The OnePlus 8T is upon us and today let’s compare the OnePlus 7T from last year to the latest OnePlus 8T.

When you hold the OnePlus 7T in one hand and the OnePlus 8T in the other, you might get confused as to which one is the newer out of the two. In fact, the OnePlus 7T has a few tricks up its sleeve, with a frosted finish glass back which looks and feels immensely better than the glossy back on the OnePlus 8T. On the flip side, the OnePlus 8T has matte aluminium sides compared to glossy on the 7T. I find the look and feel of Matte better but again, you could have a different opinion. 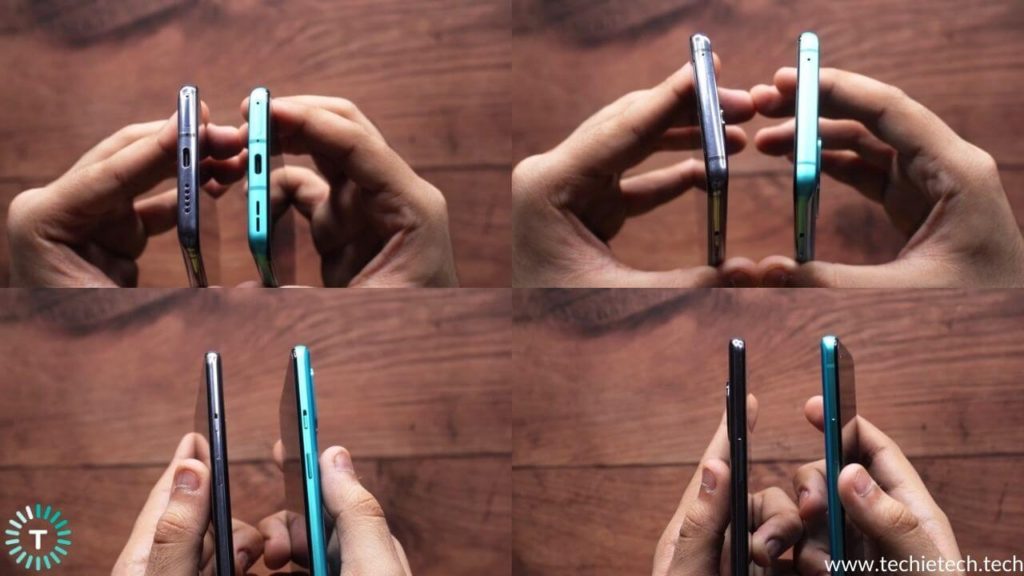 Honestly, both phones have more similarities here than differences. Both of them have a flat screen on the front, which I really like. Both of them have Gorilla Glass 5 on the front and the back. They’re both having excellent clicky buttons with the very useful Mute Slider. So what I can tell you objectively is that going just from the build quality and materials used, the OnePlus 7T can still hold its own against the 8T and does not feel like a step down or a predecessor by any means.

But keeping build quality aside, let’s focus on the design because I think there is a wild difference in approach here. The OnePlus 7T, with it’s large, standout circular camera bump is designed to stand out from the crowd. It is instantly recognisable from a distance. I like that on my phone. In an era where phones are getting increasingly similar to each other, designs that stand out must be appreciated. 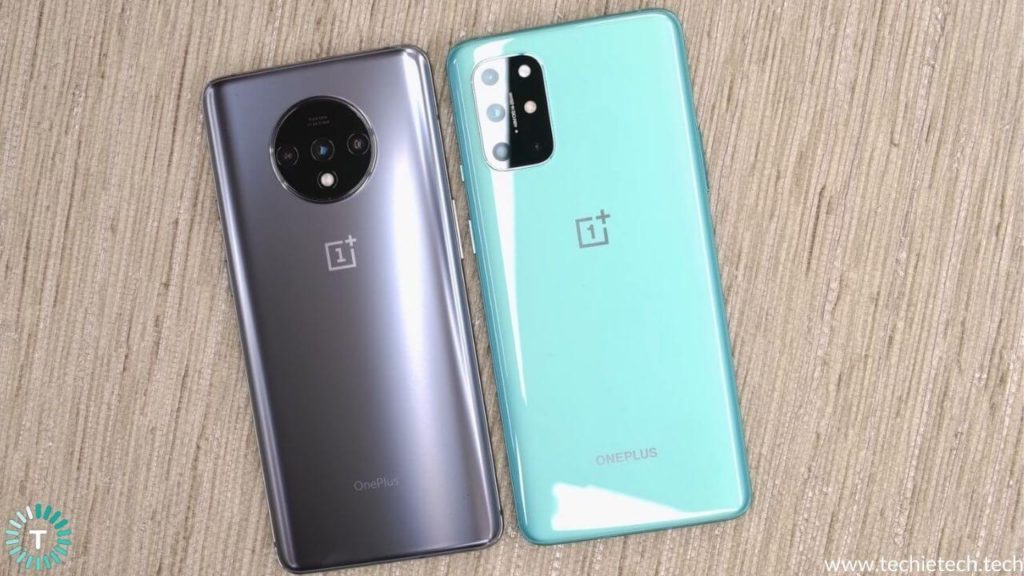 On the other hand, the OnePlus 8T, with it’s camera module to the top left and glossy glass back honestly looks like just another phone. Again, this is all personal preference and you could like that, but I personally would have liked it better if OnePlus did not go for such a mainstream look on the 8T. Granted, it is less obtrusive than the 7T with it’s smaller and shallower camera bump, but the design does not incite any kind of excitement. It gives more of a “Just Another Phone” vibe.

Of course, both these displays are flat, which means they are wonderfully functional. You do not have to worry about the problems like accidental touches and glares that come with a curved display. Sure, it doesn’t look as premium as a lot of flagships but I will prefer functionality over form in this one. 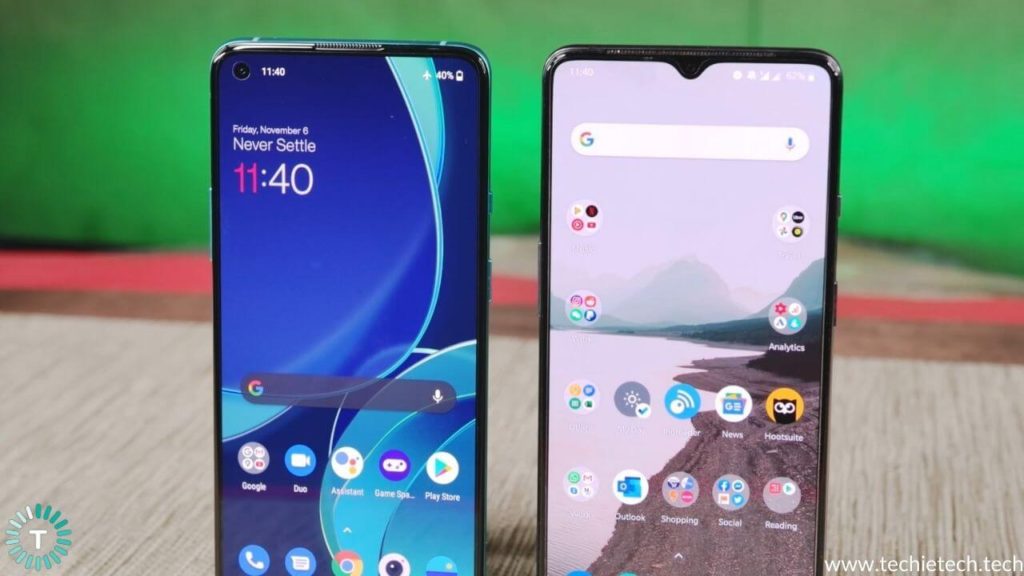 Talking about the actual panel quality, there are some small but significant upgrades here. While both phones have the same size 6.55” panel, the same 1080 by 2400 resolution and the same 402 Pixel per inch, the OnePlus 8T has a higher refresh rate at 120 Hz compared to 90 Hz on the 7T. But you don’t need me to tell you that. That is just specs written on paper. I am here to share the experience of using both of these. In that scenario, the display on the OnePlus 8T is noticeably better. The colours, the sharpness, the saturation are all a step up from the OnePlus 7T’s panel. The whites look more clean and bright too. One area where the OnePlus 7T’s display is actually better is minimum brightness where the 7T’s display can go dimmer than the one on the 8T. To sum up, if you are deciding between the two phones, the OnePlus 8T does provide a noticeably better experience. But if you already have a OnePlus 7T, the display is not enough of a step up to justify upgrading to the OnePlus 8T.

Another thing that does not justify upgrading is the internals. OnePlus phones tend to pack the most powerful components that are available at the time of launch and that is the story with both the OnePlus 7T and the 8T. The OnePlus 7T packs last year’s flagship Snapdragon 855 while the newer 8T packs this year’s Snapdragon 865. The difference in day to day performance is basically non existent. Sure, heavy apps and games will load a second or 2 faster but who cares about that. Smartphone CPUs have gotten so good in the past few years that even a 2-3 year old flagship processor performs reasonably well today. Of course, if you are choosing, I will always recommend the newer one since the newer processor will stay faster for longer. But today, putting both these phones side by side, they both have equally good performance. 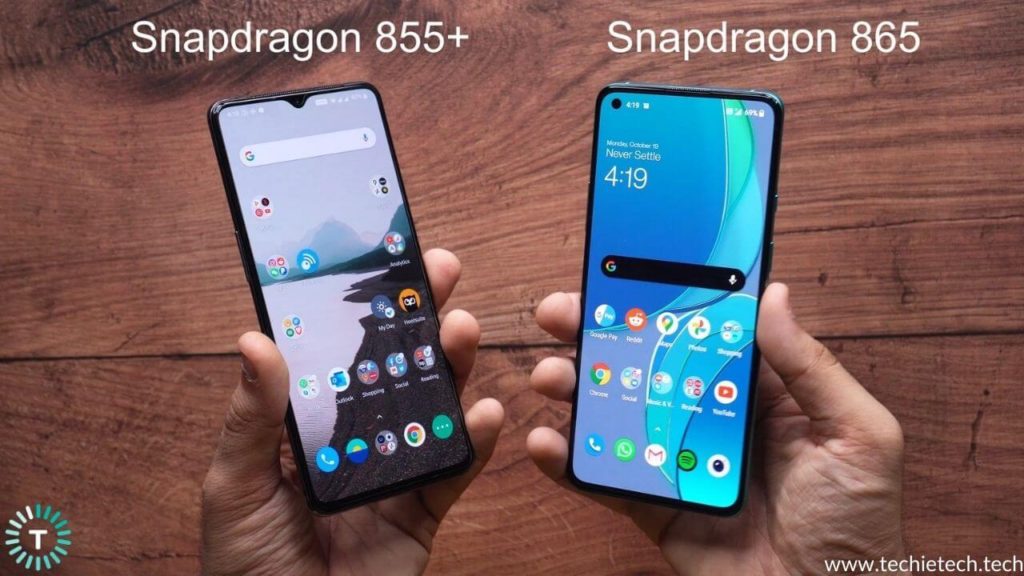 What might be an important factor here is that the OnePlus 8T has 5G support. As per my research, most of the places still don’t have enough 5G infrastructure in place today to make 5G an important factor. But we tend to use our phones for around 2-3 years now, even more, and 5G should be more widespread by then. 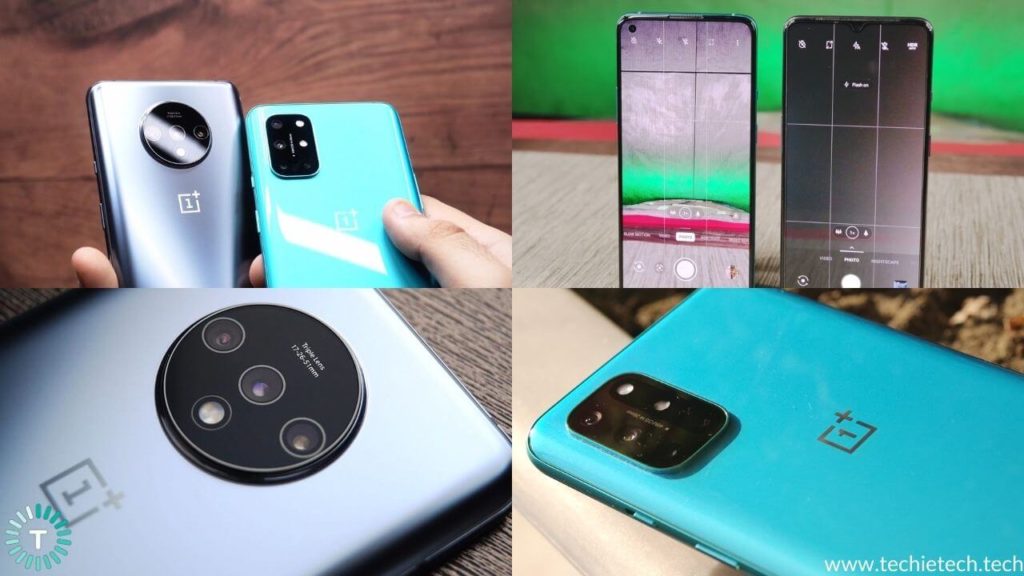 Let’s talk about the cameras now. The 8T sports a quad-camera setup on the rear while the 7T has a triple camera setup. The primary camera is the same on both devices. In addition to that, the 8T has a 16MP ultrawide, a dedicated 5MP macro, and a 2MP monochrome depth sensor. On the other hand, the 7T has a 16MP ultrawide camera along with a dedicated 12MP telephoto camera module. Let’s find out how they perform in real life.

In conclusion, while both the phones provide a decent smartphone camera experience, the OnePlus 8T fixes some critical issues in Image Processing that are still present in the OnePlus 7T. The App itself is more snappy and bug free too. Even though the OnePlus 8T lacks a telephoto camera, it still has the overall better camera system. While the OnePlus 7T is still a decent shooter for its price, the OnePlus 8T is a step above and should be your choice, if smartphone photography is important to you.

The battery life on both the OnePlus 7T and 8T is pretty similar. While I am getting approximately one more hour of extra screen on time with the OnePlus 8T, that could be simply because of the fresh battery pack on the new OnePlus 8T compared to the old one on this one year old OnePlus 7T. But all in all, both these phones should easily last you a day of mid to heavy use.

Where the 8T trumps ahead is the charging. Remember Warp Charge 30T, OnePlus’ charging technology that charged the OnePlus 7T insanely fast? OnePlus just one-upped that with the new Warp Charge 65 technology which is making its debut on the 8T. This technology is no joke guys. I have seen the OnePlus 8T charge from 0 to around 50 in just 15 minutes. It only takes 40 minutes to go from 0 to 100. Now, Warp Charge 30T is still fast enough for every user out there, but it doesn’t put a smile on your face the way Warp Charge 65 does. They even included the fast charging adapter in the box, which is amazing, considering how that might stop happening in the near future.

When we talk about biometrics, there isn’t really any difference. Both phones have in-display Optic fingerprint sensors which are fast, reliable and highly accurate. Both require you to turn the screen on before using them. I am willing to bet that the sensor hardware is the same on both these phones.

Talking about the phone call experience, both these phones are pretty similar again, providing a decent earpiece and microphone combination. However, the OnePlus 7T seemed to be slightly better at catching a cellular signal and holding it compared to the OnePlus 8T.

OnePlus 8T vs OnePlus 7T: Which one should you buy? 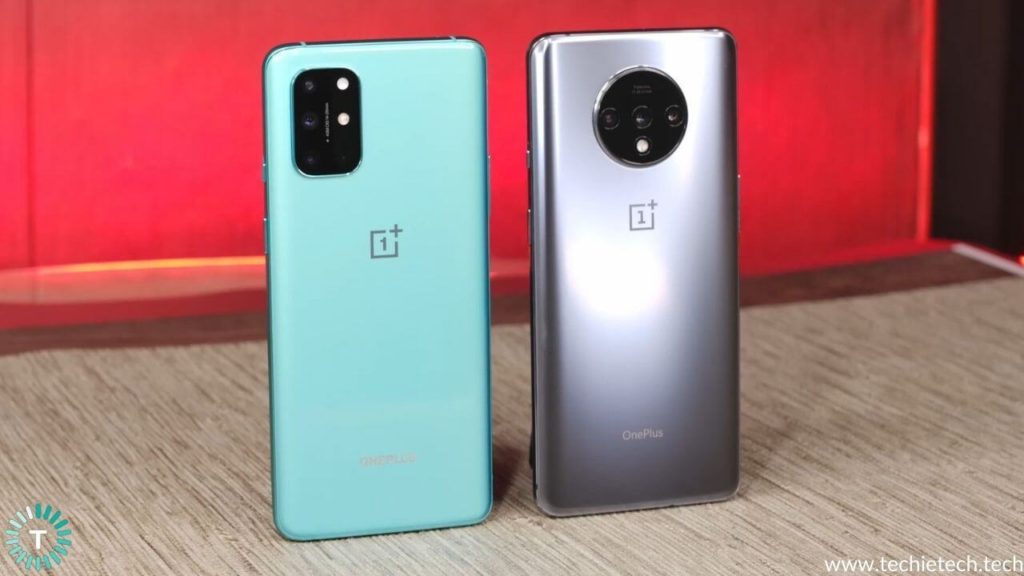 In conclusion, the OnePlus 8T offers a number of small upgrades over the OnePlus 7T be it 120 Hz over 90, 5G support or a beefier processor. However, I still cannot recommend a OnePlus 7T user to upgrade to the OnePlus 8T even if you paid me to say it. The OnePlus 7T is still an amazingly capable phone and I am sure you can get 2 more years of life out of it easily. If you really, really want to upgrade, at least wait a few more months till the OnePlus 9 comes out.

However, if you’re in the market choosing between the two, I will recommend getting the OnePlus 8T. You get all of these neat little upgrades, better software support down the line and a phone that will definitely last a year longer. The 8T definitely makes more sense then.