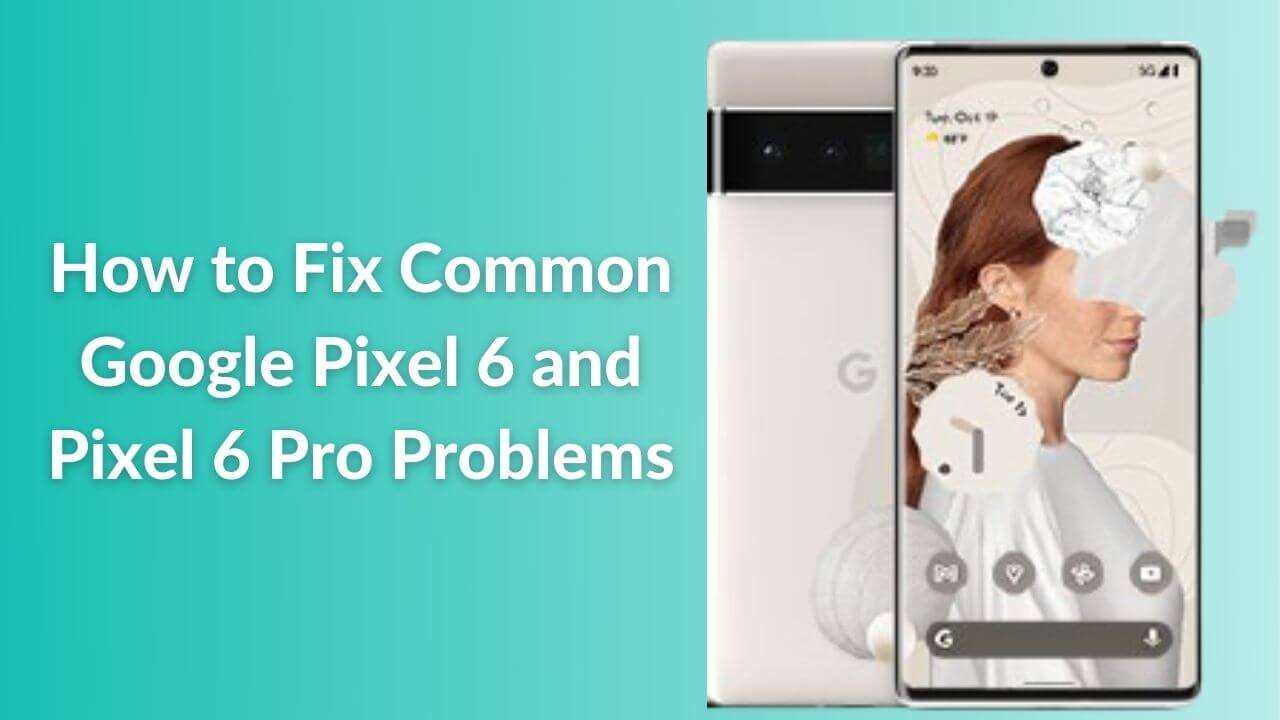 Google has launched the most anticipated Pixel 6 series at the digital event held by the company on October 19, 2021. The Pixel 6 lineup includes the Pixel 6 and Pixel 6 Pro that come with a hefty price tag. With the integration of Tensor chipset and Android 12, Google claims the Pixel 6 series to be the best performing phone launched by the company. However, things started getting worse for the company when users reportedly claimed many issues arising on the Google Pixel 6 and Pixel 6 Pro started coming out, just after the units were shipped. Everyone was hoping that the Pixel 6 series would be the perfect Android flagship, but the initial response of users was not what we expected.

As a user, it’s frustrating to even imagine a problematic smartphone, especially when it is Google’s flagship 2021. Nonetheless, it is fact and we can’t deny that users are facing various issues on Pixel 6 and Pixel 6 Pro. With that being said, we also want you not to worry as Google is aware of such problems and will surely come up with a fix in near future.

Until then, you can check out this article that we have created by carrying out hours of research by understanding the Pixel 6 and Pixel 6 Pro issues. Here we have talked about Pixel 6 battery issues, the slow fingerprint scanner on the Pixel 6 series, and more. That’s not all, we have also mentioned tried and tested solutions that can help you fix the common problems on Pixel 6 and Pixel 6 Pro.

If you feel that your Pixel 6 and Pixel 6 Pro’s fingerprint sensors are inconsistent or very slow, you are not the one. There are several reports from users across the globe. After the problem came to light, Google issued a statement saying that it is happening due to an enhanced security algorithm. But, don’t worry, there is a way around tackling slow and inconsistent fingerprint scanners on Pixel 6 and Pixel 6 Pro.

If you’re facing fingerprint lag issues on Pixel 6 and Pixel 6 Pro, we urge you to try the following methods to fix the same.

In a Google Pixel subreddit post with more than 500 upvotes, a user advised a cheeky solution to fix annoying authentication issues on Pixel 6 and Pixel 6 Pro. He suggested setting up multiple fingerprints for the same finger at different pressure levels and lightning conditions on the Pixel 6 series.

Sometimes Pixel 6 and Pixel 6 Pro might fail to unlock due to the inconsistent thickness of screen protectors applied on it. Google recently recommended using screen protectors from “Made for Google” certified brands such as Zagg, OtterBox, and Panzerglass.

Just in case you are among those who are facing an even scarier issue with Dead Fingerprint Scanner on Pixel 6 and Pixel 6 Pro. According to some users, the fingerprint scanner on the Pixel 6 series no longer stays usable after the device runs out of battery. This problem came to light after the November software update. For that, we recommend performing a factory reset on the affected device immediately. Please note that looking at the severity of the problem, we can expect this problem to get fixed by Google in the upcoming updates.

Another unfortunate issue that’s haunting Pixel 6 users is that the device is randomly calling any person from the contact list. Several reports indicate that Google Assistant is the real culprit behind the ghost or phantom calling on Pixel 6. The alleged issue is possibly happening because of the trigger phrase for Google Assistant, ‘Hey Google’ followed by mishandled audio nearby that indicates or sounds the same as if it is commanded to call someone on the phone. However, it’s happening with users in quiet surroundings as well. One user mentioned that the device randomly dialed a friend that the user had never called before, an awkward situation indeed.

Fortunately, Google is aware of the ghost calling issue on Pixel 6 and suggested that they’re working on a fix that should be rolled out through an update soon.

In another scenario, if you want to prevent your Pixel 6 from ghost-calling any random user from your contact list from the lock screen, there’s a way! You can disable the ‘Assistant responses on lock screen’ feature from the Settings.

Here’s how to do it:

Several users also complained that the Wi-Fi calling is not working properly on Pixel 6 and 6 Pro. Users claimed that when the device is connected to Wi-Fi while the device is on AirPlane mode, the call automatically disconnects by showing a screen prompt that says “Turn off airplane mode to make a call.” It was seen on users who use the Pixel 6 series using Fi, although it affected users across different carriers too. Users claimed that reinstalling the Fi app or clearing cache didn’t seem to work.

This problem seems to be the reason for network bugs that were eventually solved after a day or two of regular usage. Users also confirmed that it can be fixed with a minor restart and talking to the Fi Support team. You can also try resetting the network settings of Pixel 6 Pro.

This problem is reported by users of Pixel 6 and Pixel 6 Pro in the UK, as of now. But, it’s most likely to haunt users from different parts of the world. Complaining about the issue, a user reported that he was constantly seeing “NO SERVICE” or “NO SIM” on the top left of the lock screen and the top right, whereas the signal strength shows an exclamation mark “!”. Interestingly the Pixel 6 series still detects the SIM settings even if it says “NO SIM.”

Additionally, if you’re facing a 5G not working issue, you might require to change settings on the GiffGaff accounts. You can also check the relevant webpage addressing this issue to fix 5G issues on Pixel 6 and Pixel 6 Pro.

For those who don’t have access to the GiffGaff, we want you to try the following methods to fix 5G not working on Pixel 6 series:

Also read: How to fix 5G not working on Galaxy S21 series

The flickering issue is one of the most reported display issues on Pixel 6 and Pixel 6 Pro. Users claim that when they apply slight or momentarily pressure on the power button, they can see the flicker of residual light even if the device is already turned off. Surely, it ain’t a big issue but it needs to be fixed.

If you’re facing a flickering issue on the Pixel 6 series, there’s nothing you can do, as of now. It is suggested to update your Pixel 6 or Pixel 6 Pro when the December 2021 patch is available. If it looks like this, then you need to head straight to the Google Store and ask for a replacement.

Adaptive brightness is the feature you’d find in almost every smartphone now. It automatically adjusts the brightness of the device according to the outdoor lighting giving you the perfect view of the phone. However, several users have reported that the brightness goes up and down abnormally on Pixel 6 and Pixel 6 Pro. No doubt, it is very annoying especially when you’re using the device at night or on a bright sunny day in the afternoon.

If you’re frustrated because of this adaptive brightness issue on the Pixel 6 series, we recommend doing the following:

Some users also complained that the Pixel 6 screen wakes up with no movement. This issue can cause your battery to run out quickly. It turns out that this problem is still haunting the users of Pixel 6, even if the adaptive brightness is off, lift to wake off, and tap to wake is off. Nonetheless, you can try out a few things to solve the issue.

As we mentioned above, disabling various features didn’t seem to resolve the issue. However, few users on Google Forum mentioned that disabling the fingerprint scanner solves the issue. Yes, it’s not the permanent solution to the problem but it’s worth trying until Google drops an update to fix various display issues on Pixel 6 and Pixel 6 Pro.

If you are among those who can’t update the Chrome app on Pixel 6 and 6 Pro, you need to understand why it’s happening. There are several factors that result in this kind of issue. Some major reasons behind Chrome not working on Pixel 6 could be the following:

To fix this and other issues related to Google Chrome on the Pixel 6 and Pixel 6 Pro, we want you to try a few things that we have mentioned below:

If you are looking to try out other methods, we urge you to check our roundup on how to fix Google Chrome not working on Pixel 6 and Pixel 6 Pro.

We came across a long thread on the Google Pixel subreddit where users reported bugs where media and audio playback pauses randomly on Pixel 6 and Pixel 6 Pro, out of nowhere. Users were seen raising playback and media pausing issues on some popular apps such Spotify, YouTube, etc. Looking closely at the complaints, we got to know that it is mostly happening for users who have upgraded to Android 12.

At the time of writing this article, we haven’t come across any proven solution. However, there are following methods that we think you should try to fix the media unexpectedly pausing issues on Pixel 6 and Pixel 6 Pro.

Several users complained about app issues on the Pixel 6 series. Reportedly, the Telegram app was stuck at 60Hz for some users whereas some claimed that the Starbucks app and Nova launcher are not working properly and crashing badly on Pixel 6 and Pixel 6 Pro. Besides, there were reports where users were unable to launch the Discord app on Android 12 (Since the Pixel 6 series ships Android 12, we are addressing this issue here).

If any of you face a problem where an installed app on a Pixel phone doesn’t work properly (this also includes app crashing issues, the app won’t open or not responding issues), you can simply follow a few methods that we have mentioned in the solutions section below. Try it out!

You can try a few methods that would help fix various App issues that we have discussed above:

For a detailed guide, you can head to the troubleshooting page for app issues published by Google.

It exactly ain’t an issue, but the result of an update made by Google recently as the Android 12 has recently replaced the “Android Auto Phone Screens” with the most anticipated Assistant Driving Mode. That’s why you’re not able to see the Android Auto icon on the App launcher of Pixel 6 and Pixel 6 Pro.

With that being said, Android Auto is still there but not in the app launcher. You can still find the Android Auto app from the Settings of your Pixel 6 smartphone. Simply visit, Settings > Connected devices > Connection preferences > Android Auto.

The removal of Android Auto from the launcher could be something we will see in upcoming smartphones with Android 12 in near future. It can be a cheeky move by the company to migrate users to the Assistant Driving Mode.

That’s all for now in this article which was focused on discussing common Google Pixel 6 and Pixel 6 Pro problems and their solutions that we have come across. In the future, if there are any issues or bugs related to the Google Pixel 6 and Pixel 6 Pro, that all will be here. Stay tuned and bookmark our website for the same. Just in case you have got an iPhone 13 and are facing some issues with it, you can head to our article where we have discussed common iPhone 13 and iPhone 13 problems and their possible solutions.

Best Screen Protectors for Galaxy S22 Plus in 2022