From first glance, it’s hard to tell a difference between both these phones purely by their appearance. Both of them have a glossy glass back, a quad camera module to the top left and OnePlus branding. I much prefer the matte sides on the OnePlus 8T over the OnePlus Nord’s glossy finish but apart from that, both of these phones are extremely similar lookwise. 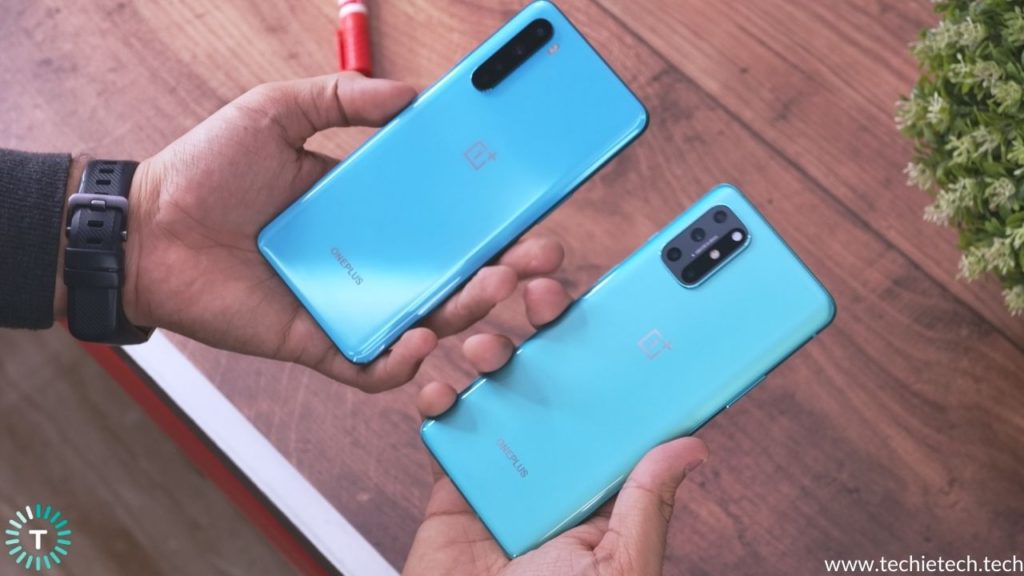 Another difference that stood out to me is that the buttons on the OnePlus 8T are noticeably more clickier and tactile compared to the Nord. Even the mute slider moves more smoothly on the 8T while the one on the Nord feels rough in comparison. All in all, while the OnePlus Nord is not bad in the design and looks department, the OnePlus 8T clearly feels like it is a segment above the OnePlus Nord in refinement and construction. 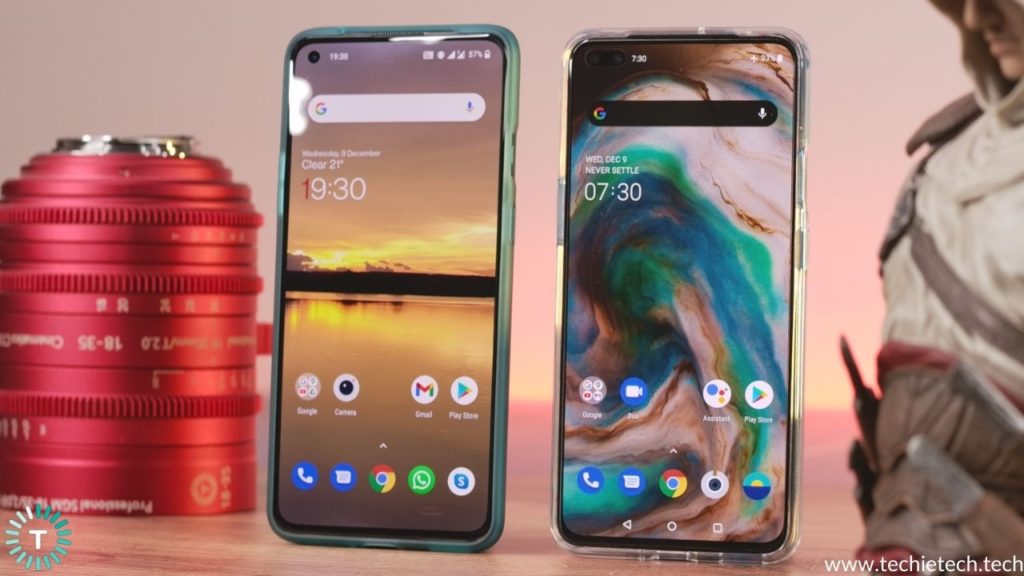 Flipping over to the displays now, things are actually pretty good here since both these phones pack excellent displays. The only difference on paper is that the OnePlus 8T has a higher refresh rate at 120 Hz compared to 90 Hz on the Nord and a slightly larger size. The difference between 90 and 120 Hz is not really noticeable in day to day usage. The difference between the bigger dual selfie camera cutout on the Nord and the smaller punch hole cutout on the 8T is frankly more significant for me. In real life, even though both displays are AMOLED with the same resolution, I have to admit that the OnePlus 8T’s display looks better in terms of saturation, vibrance and colour reproduction. 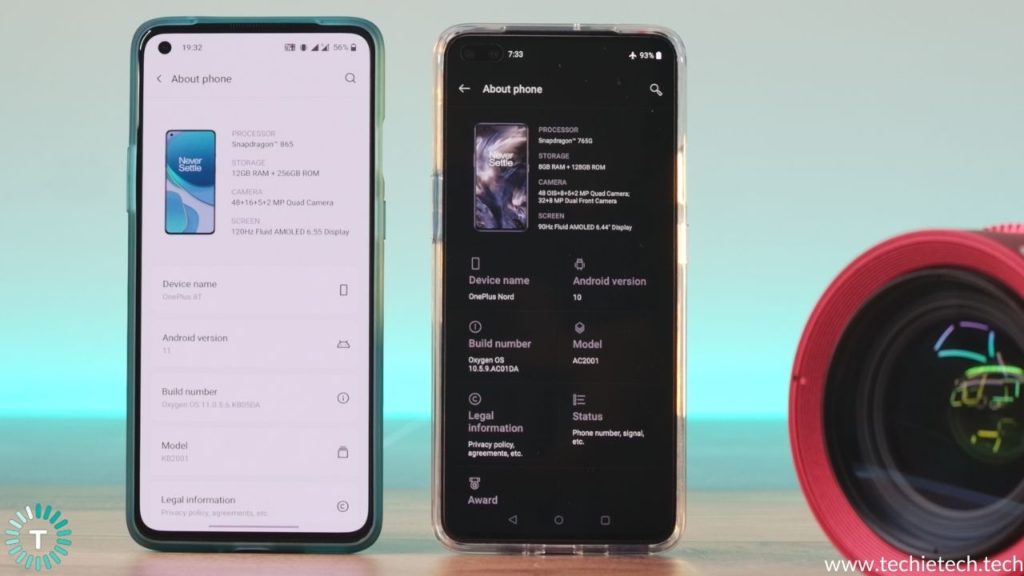 Moving on to the performance, things get very interesting here. The OnePlus 8T is basically the most powerful Android phone you can buy today with the top of the line Snapdragon 865 Processor. If you are into gaming or video editing or just like having maximum power under the hood, the OnePlus 8T is the phone to get as the performance gains are significant. Since it is more powerful, it will also tend to be smoother in the long run.

However, if you’re a general user, someone whose usage curtails Social Media, Texting, some movie watching and other non power intensive tasks, the OnePlus Nord is pretty good too. The Snapdragon 765G processor is a mid range processor but that does not mean it is a slouch, especially in 2020, when even entry level phones pack decent performance. The OnePlus Nord might be having the less powerful processor in the comparison but in a vacuum, this phone is sufficiently powerful for day to day use and even casual gaming.

Of course, I won’t dive too deep into the software experience since they are both powered by Oxygen OS. One thing that I speculate, and I could be wrong here, is that the OnePlus 8T might get software updates earlier than the Nord since it is the more premium phone. But since the Nord is a whole new lineup, only time will tell how OnePlus performs when it comes to delivering new software. 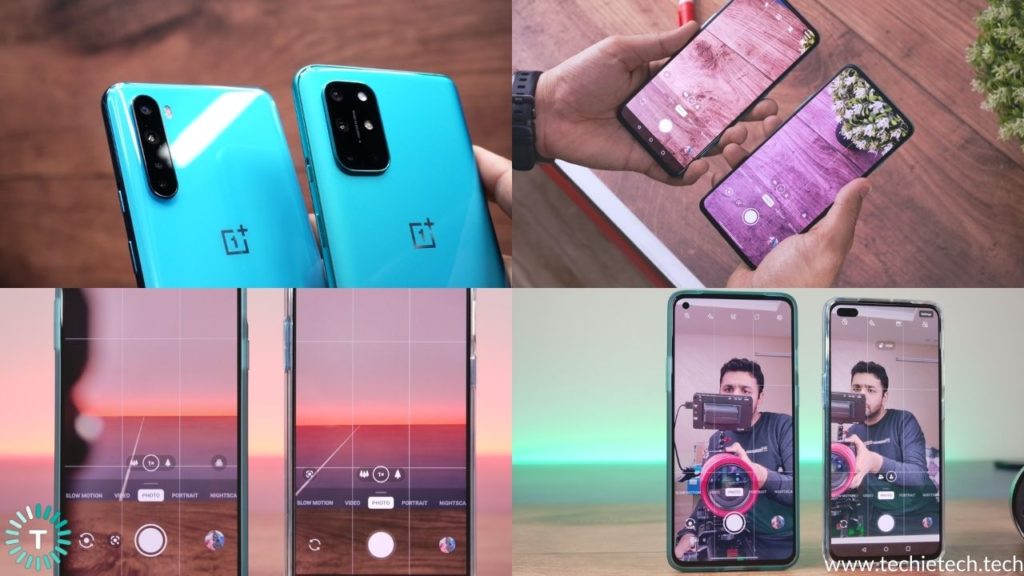 Moving on, let’s talk about the cameras. In terms of optics, both smartphones sport a quad-camera setup on the rear with the same primary camera and a similar macro and depth camera setup. The 8T has an upgraded 16MP ultra-wide-angle camera compared to the Nord’s 8MP shooter. On the front, OnePlus Nord sports a dual selfie camera compared to the single 16MP snapper on the 8T. Let’s find out how these perform in real life.

Both smartphones have practically the same camera setup with minor differences. You do get a lot of small enhancements with the OnePlus 8T, the most noticeable of which is the processing speed. So, while you do get an overall better camera experience with the 8T, I cannot recommend you pick it over the Nord just because of the camera.

Let’s talk about the battery life now. I have used both these phones extensively as my daily drivers and I can tell you that the battery life is very good on both the OnePlus 8T and Nord. You can easily get a day’s worth of use and even stretch it to a day and a half without much effort. We’re talking around 5 to 6 hours of SOT on both from a single charge. 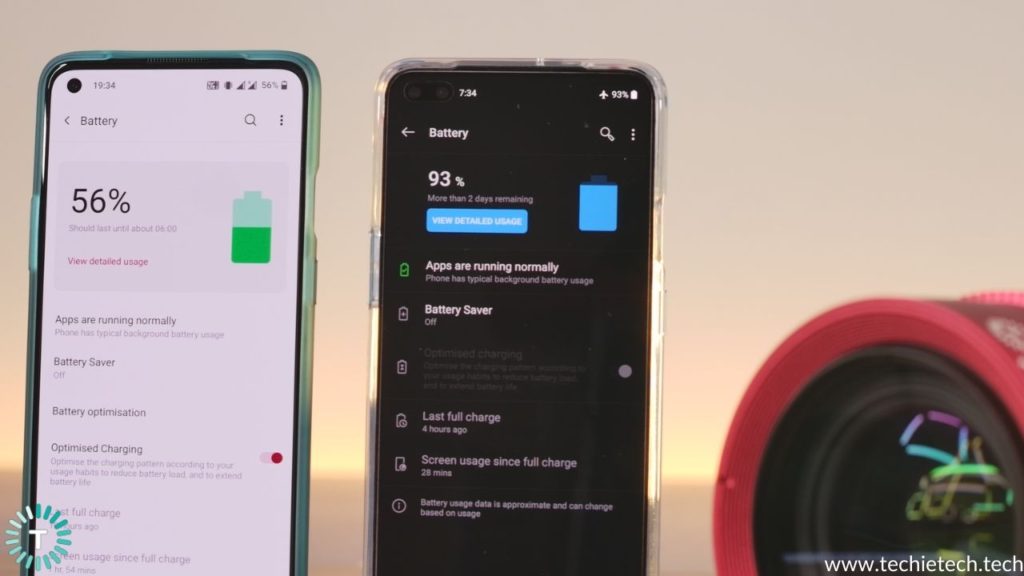 Charging however is a different situation. Both phones have no support for wireless charging while both of them support crazy fast wired charging. But the one on the OnePlus 8T is faster by a lot. It is the first phone to feature OnePlus’ new Warp Charge 65 which charges it from 0 to 100 in around 40-45 minutes. The OnePlus Nord supports Warp Charge 30T which is slower in comparison but is still faster than 99% of phones in the market. Again, in a vacuum, both these phones charge up really quickly but in this comparison, the OnePlus 8T takes the win.

Another thing worth noting is that the stereo speaker setup on the OnePlus 8T is a big step up in experience compared to the mono speaker at the bottom on the OnePlus Nord. It is just very easy to block when you grip the phone in landscape mode. When watching movies, the earpiece speaker on the OnePlus 8T shoots audio directly in your direction which definitely enhances the overall experience. On that note, even the haptics on the OnePlus 8T are significantly better in comparison.

OnePlus 8T vs OnePlus Nord: Which one should you buy? 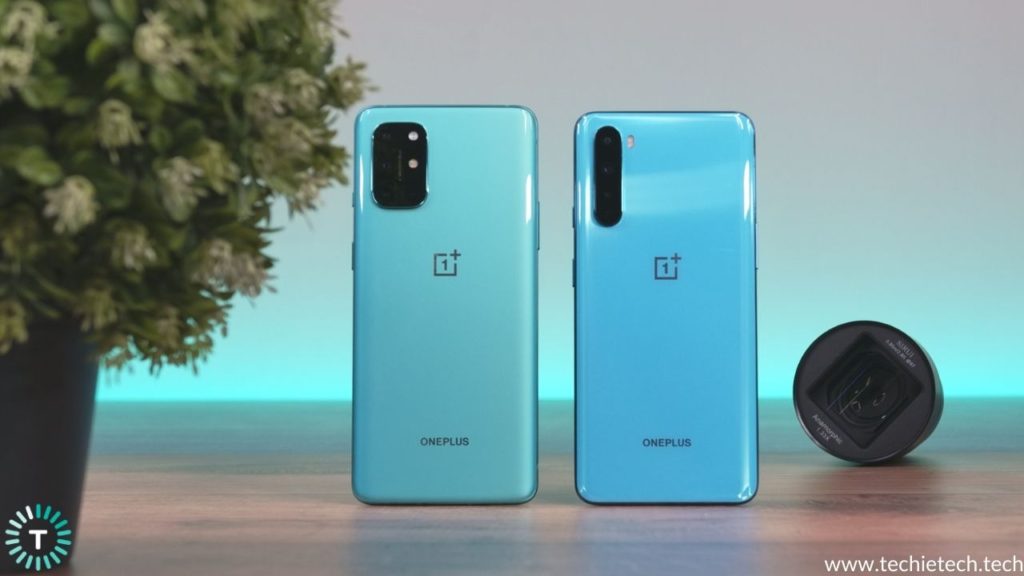 To conclude, should you buy the OnePlus Nord or spend more to go for the OnePlus 8T. It truly depends on the kind of the user that you are. While the OnePlus 8T provides a significant jump in performance and some other minor refinements, they would be useless to you if you are not going to use the extra power or not care about the incremental changes. If you are that kind of user, get the OnePlus Nord and save your money.

However, if you don’t mind spending the extra money over the Nord or if you are a power user, the OnePlus 8T provides a big step up in performance while also providing small but important improvements. Get it and I can promise you that you will fall in love.