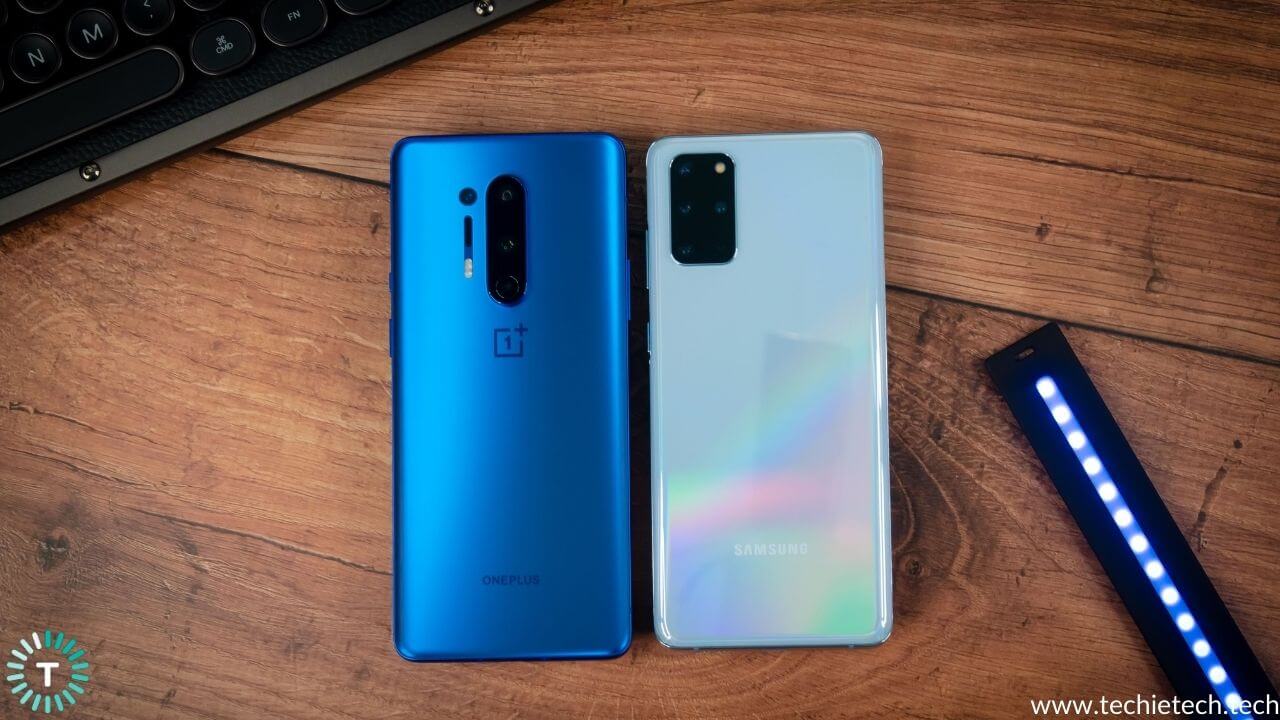 It’s been both a special year for flagships and yet an unexciting one. On the one hand, we can see that all the flagship smartphones have become so refined that they’re all nearly perfect but on the other hand, flagships are facing the heat from cheaper phones which are almost as good and more expensive foldable phones which are more futuristic. Well, the 2 most prominent flagships of this year are the OnePlus 8 Pro and Galaxy S20 and today, let’s compare them. 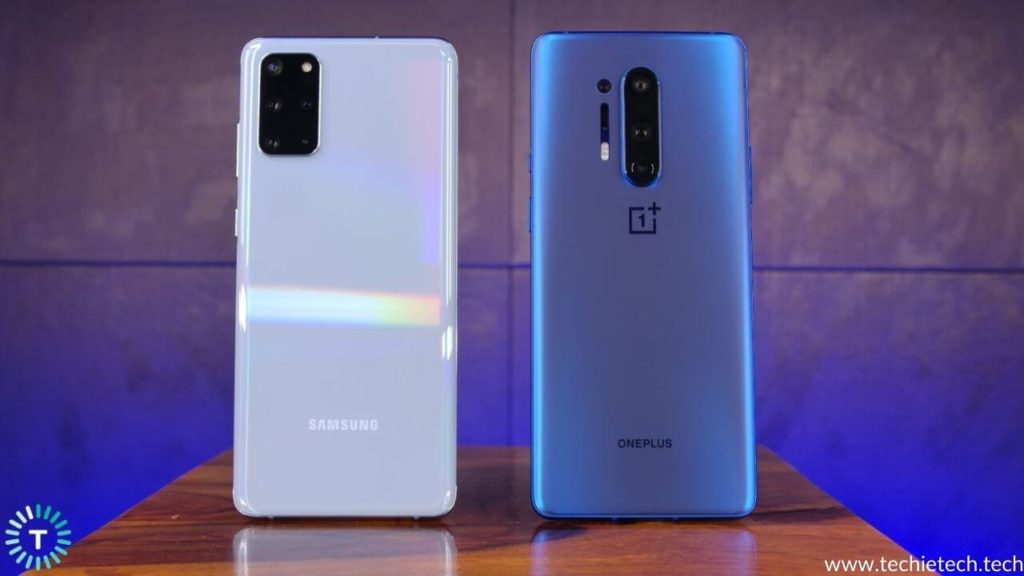 When you flip over to the display, a radical difference to approach can be seen. Both these phones’ predecessors which are the Galaxy S10+ and the OnePlus 7 Pro had curved displays and the extent to the curve was roughly the same. This year, Samsung and OnePlus went in the opposite directions. While the S20 has flattened the curve on the front glass, OnePlus increased the curve and the waterfall effect on the display. And in this scenario, Samsung clearly wins. The S20’s display has the visual appeal that comes with a curved display and the practicality that comes with a flat display. The OnePlus 8 Pro gets a lot of accidental touches and even glare on both the edges. The extra curve also makes it harder to grip one handed. So, even though both these phones feel as premium as flagships have ever felt, I have to give this round to Samsung for the excellent display strategy which has led to a more ergonomic design. 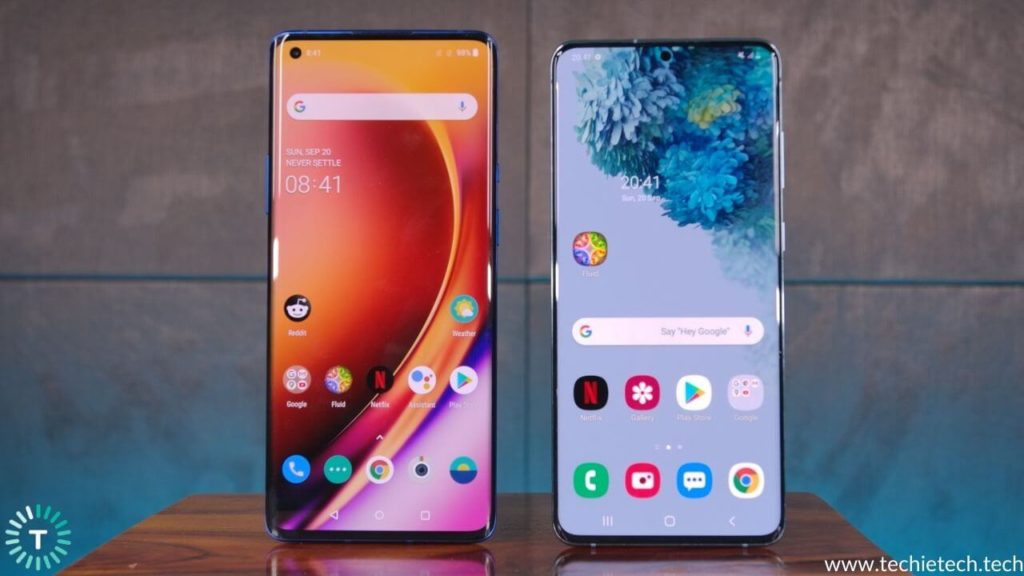 Since we’re done talking about the curved glass, let’s talk about the actual quality of the display panel. Both phones have a 120 Hz panel with roughly the same QHD resolution. Both the displays are beautiful. Traditionally, Samsung has been the undisputed leader when it comes to display technology. And for good reason. The display on the Galaxy S20 Plus is one of the best I have ever used with larger than life colours, excellent saturation and true vibrance.

But that doesn’t mean the OnePlus 8 Pro’s display is a slouch, not at all. The OnePlus 8 Pro actually has the advantage of being able to run the display at QHD resolution with 120 HZ refresh rate, while on the Galaxy you can only choose 120 Hz + FullHD or 60 Hz + QHD. I personally would have used 120 HZ + Full HD for better battery life anyway but to not have the 120 + QHD option at such an expensive price point is definitely a negative point.

OnePlus would have managed to ace out and finally defeat Samsung at it’s game but then it messed up. It messed up bad. See, the OnePlus 8 Pro’s display has received widespread outcry from a number of users who have reported issues ranging from black crush to green tint and what not. We made a detailed analysis video all about it if you want to check it out. But long story short, the OnePlus 8 Pro does tend to have some display issues and even though they are not bad enough to ruin your whole experience, they are bad enough to make you notice them.

Moving on to the performance, this is quite weirdly a location specific comparison. Because in the Galaxy S20’s case, some regions around the world get a better CPU which is the Snapdragon 865 while the rest of the world gets Samsung’s in house Exynos 990 CPU which is inferior in pretty much every way. The OnePlus 8 Pro comes with the Snapdragon 865 irrespective of your geo-coordinates. 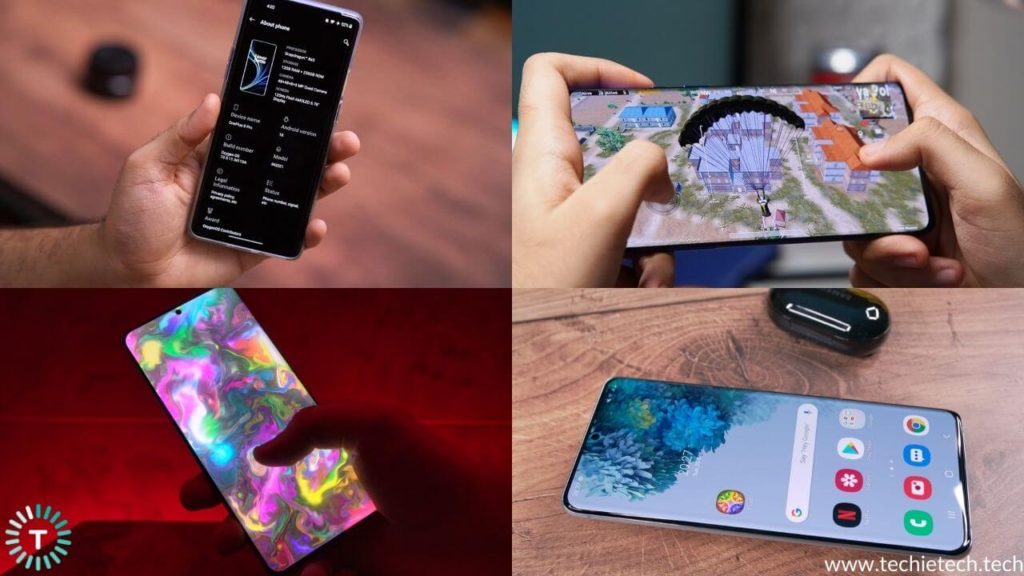 Again, this can be a long drawn out argument in itself so we’ll cut it short. The Snapdragon Galaxy S20 is better in a lot of ways compared to the Exynos version in areas like gaming performance, overheating, throttling, battery life etc. I would have loved to say that the difference between the Exynos and the Snapdragon doesn’t matter if you’re not an intensive user, but that would be a lie since every user wants a better battery life and a phone which runs cooler. So, if you can get the Snapdragon version of the Galaxy S20, great! But if we’re comparing the Exynos Galaxy S20 to the OnePlus 8 Pro on performance, the winner cannot be more obvious.

Let’s talk about the software experience now. If you asked me a couple of years ago to choose between OxygenOS and Samsung’s UI, I would have picked OxygenOS in a heartbeat. But with OneUI, Samsung’s software experience has improved so much that I actually look forward to reviewing Samsung devices now. OneUI is smooth, extremely well put together, and feature loaded to the point where it seems Samsung is basically pushing innovation in the Android software experience now. Features like the split screen multitasking and many more made their way to Samsung phones first before they were adopted by Google in stock Android. Of course, OneUI is not perfect. You still have a lot of bloat with Samsung providing an alternative to every Google service like Samsung Bixby to Google Assistant, Galaxy Store to the Play store and Samsung Browser to Chrome. But all in all, Samsung’s software experience used to be this messy collection of uncooked features and to see it all grow into something as mature as OneUI is truly commendable.

Let’s talk about OxygenOS now. See, OxygenOS is all about speed. Be it app opening times or the general UI animations, OxygenOS paces through everything and is by far the fastest feeling Android skin to date. The whole experience is very close to the look and feel of stock Android which is my favourite thing about Oxygen OS. OxygenOS to me is the combination of stock Android with some speed enhancing steroids and a variety of customisation options. Of course, Oxygen OS 11 is going to change all that when it launches but until that arrives, I can tell you that if you’re looking for a somewhat light and fast Android experience, pick the OnePlus 8 Pro while if you’re looking for the most loaded, feature rich and a somewhat more mature Android experience, maybe pick the Galaxy S20 Plus. 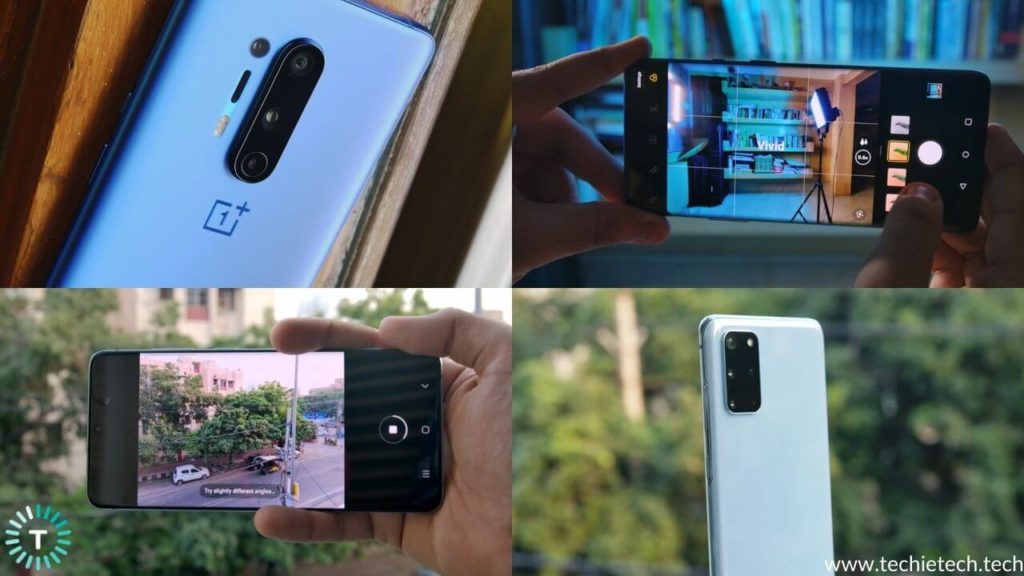 Let’s talk about the cameras now. In terms of optics, both smartphones sport a quad-camera setup on the rear. Apart from the standard trio of the primary, wide-angle, and telephoto shooters, the S20+ has a 0.3MP Depth and the OP8 Pro has a 5MP filter camera.

As mentioned in our OnePlus 8 Pro review, OnePlus has taken a significant jump in camera hardware and software. Let’s find out how it performs against the Galaxy S20+.

The S20+ offers various shooting modes with dozens of features while the OnePlus 8 Pro offers a snappier and simple camera user experience.

If you’re a camera enthusiast looking for a smartphone that delivers excellent overall performance and colors across all lenses, the S20+ would be the right choice. On the flip side, if you’re looking for a smartphone that delivers sharper and high-resolution media without breaking a sweat, the OnePlus 8 Pro makes more sense. However, in our exhaustive testing, the general performance of both these cameras is way too close and we are pretty sure that you will be happy with either. 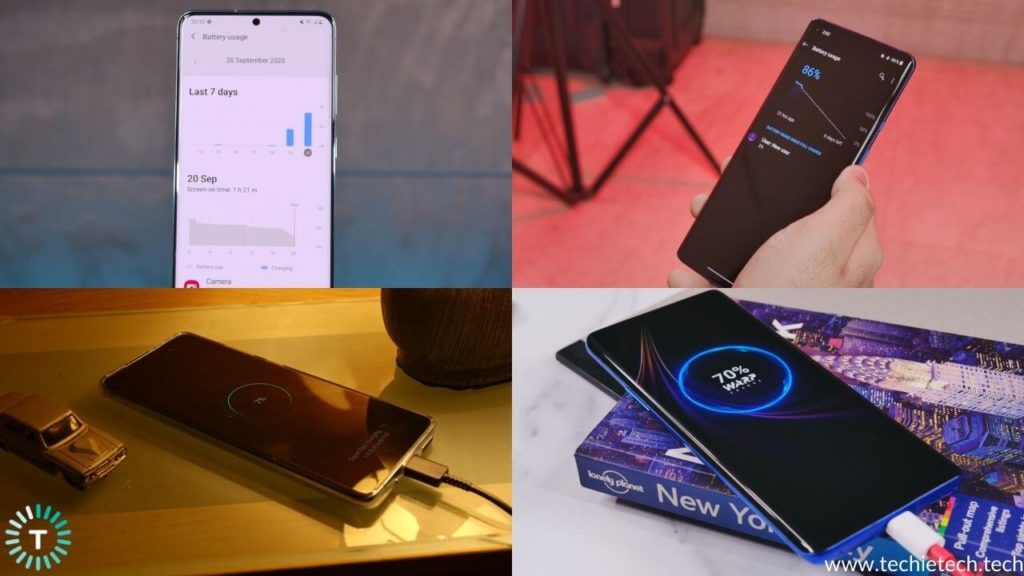 Moving on to the battery life, we have a clear winner here. See, I have used both these phones for an extended period of time because the battery life tends to get better after a few days of setting up. This is because a lot of background operations and optimisations are going on in a phone as it learns your usage patterns. But even after giving both phones time to settle, the Exynos Galaxy S20 Plus just could not match up to the OnePlus 8 Pro. On the OnePlus 8 Pro, I was easily making it through a day with 30-40% to spare which basically means that a 100% charge would last me around 1 and a half days.

On the S20 Plus, the battery life is actually pretty average and I usually ended the day with around 10% battery life. I did end one day with 90% but that’s because I ran out of battery in the middle of the day and plugged it in. So when it comes to endurance, the OnePlus 8 Pro takes the cake. It has been proven that the Exynos processor is not most efficient and the Snapdragon versions of the Galaxy S20 have better battery life, so again if you have access to the Snapdragon Galaxy S20 Plus, your results could vary. 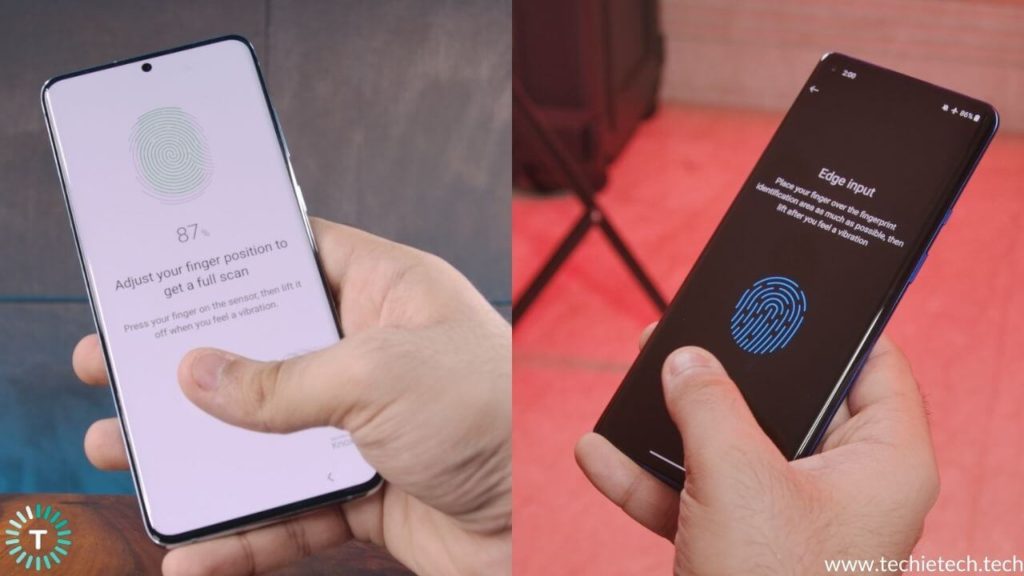 When it comes to the biometrics, both these phones have an in-display fingerprint sensor but use different technologies. The OnePlus 8 Pro uses an optic sensor compared to ultrasonic technology used on the Galaxy S20. The OnePlus 8 Pro’s sensor is definitely faster and more accurate but you have to turn the screen on to use it. The S20’s sensor, while slower, can be used with the screen off so you don’t have to wake the screen up before using the sensor. To be honest, it’s too close to call an advantage here, so let’s just call it a tie.

Call quality and signal reception, on the other hand, is an area where we just cannot call it a tie. The Galaxy S20 Plus, in traditional Samsung fashion, provided an excellent calling experience with great earpiece sound quality and excellent signal reception. The OnePlus 8 Pro is also pretty good but it gave me some trouble when using it with VoLTE wherein the VoLTE just refused to work randomly and I had to restart the phone or play with the AirPlane Mode setting to re-enable it. 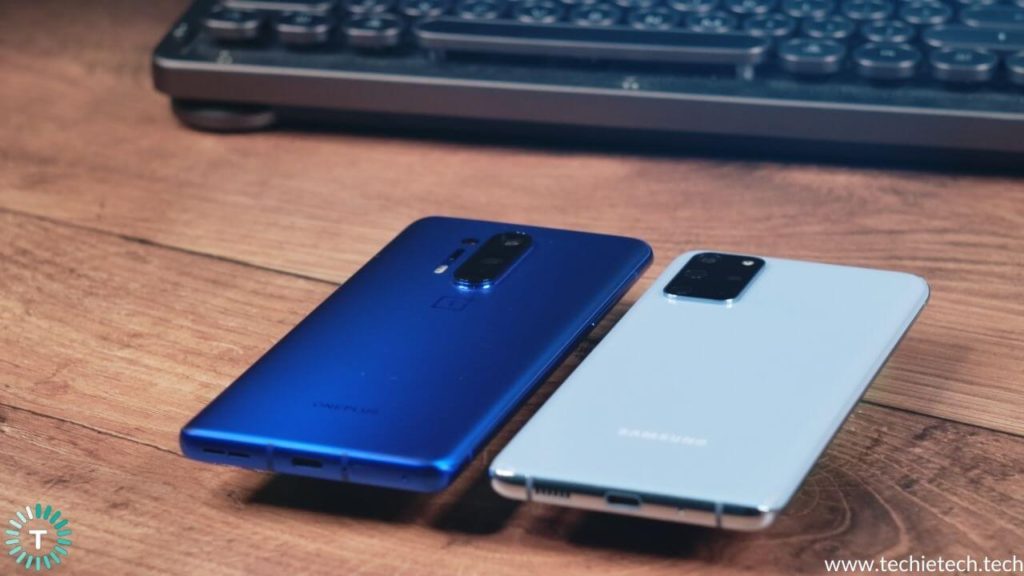 To conclude, I would just like to say that while we did point out a lot of goods and bads in this review, both the OnePlus 8 Pro and the Galaxy S20 Plus are such refined flagships that they are not really bad at anything. Both of these phones are capable enough to satisfy every kind of user and I can confidently say that none of these phones will leave you disappointed. Unless you’re a gamer. Don’t get Exynos if you’re a gamer.