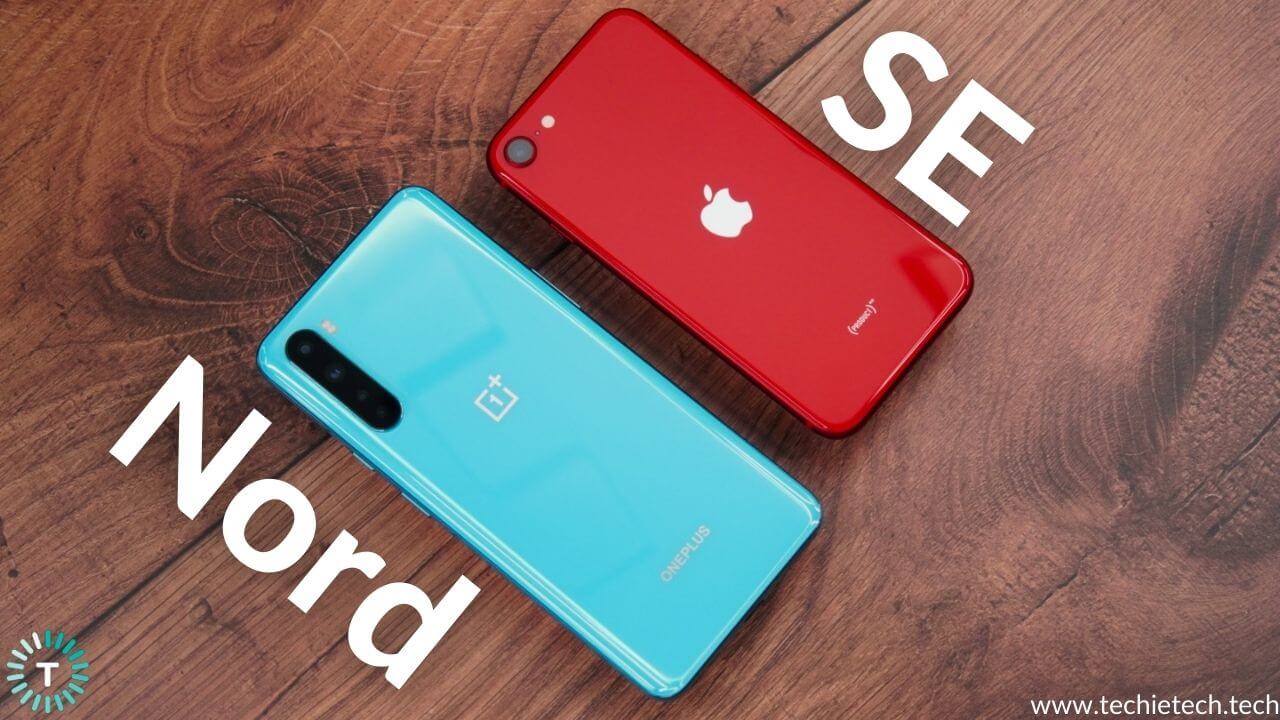 Both of these phones are the most value offerings by their respective brands and yet designed in a totally different manner. While the OnePlus Nord has a slew of modern components with a mid range processor, the iPhone SE has recycled parts from the old iPhone 8 but with the top of the line A13 processor from the more expensive iPhone 11 lineup. But what should you pick? Allow me to help you choose.

The OnePlus Nord and the iPhone SE are both very different phones from grounds up. And that difference is more obvious than ever once you pick them up in your hand. The iPhone SE is for the lover of the compact phone, for the lover of a product that gets the job done without being too tech savvy. With the exact same design as the iPhone 8 from 3 years ago, the exact same bezel size as the iPhone 6 from 6 years ago, the iPhone SE isn’t targeted to fans of modern technology. Well, the OnePlus Nord is. With its edge to edge display, 90 Hz refresh rate, multi camera array and the selfie camera cutout on the top left of the display, the OnePlus Nord looks like the quintessential 2020 smartphone. It is larger and heavier than the iPhone SE but still very handy by today’s standards. 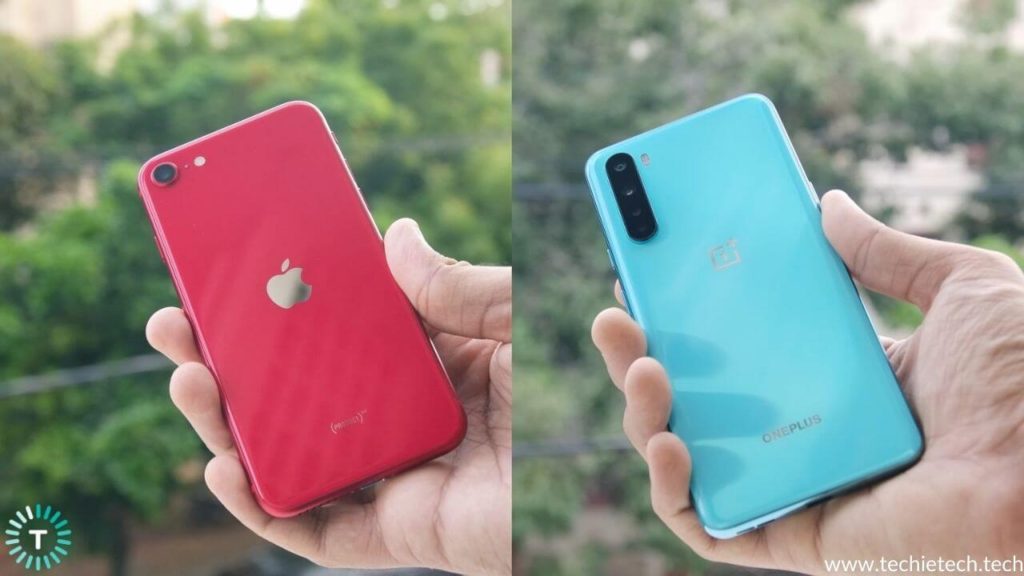 When you compare both these phones on the quality of construction, for me, the iPhone SE is a clear winner. It has a more dense and refined feel to it thanks to the aluminium frame with clicker buttons and an overall better finish. The glossy finish on the plastic frame of the OnePlus Nord feels a bit cheaper in comparison although that difference will vanish if you end up using a case, which you probably will. But all in all, when it comes to the sheer build quality and construction, while the OnePlus Nord does look more modern, it’s the iPhone SE which ends up feeling more sophisticated and well thought out. 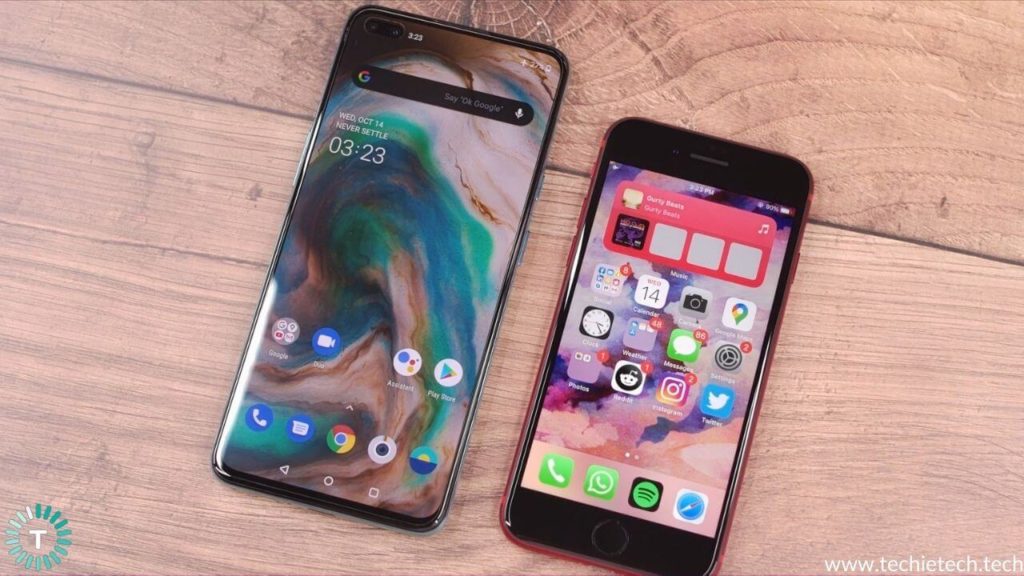 Flipping over to the display, the differences are almost comical here. If we go by the specs, this is something we shouldn’t be wasting any time on. The 6.44 inch, 1080 by 2400, 90 Hz , Super amoled display sounds like an overpowered giant compared to the 4.7 inch, Retina LCD panel on the iPhone SE. But here’s the thing, with Apple’s smooth animations and higher touch sampling rate, the differences in smoothness and performance almost vanish. Even the colour reproduction on the iPhone SE’s display is amazing for an LCD panel although it still doesn’t pop as much as the OnePlus Nord’s super AMOLED panel.

Where the major advantage lies for both the phones is the size of the display. Both have an equally important advantage here. See, the iPhone SE has been targeted for users of compact smartphones and frankly, there is virtually no competition for the iPhone SE in that regard. I cannot think of a single phone which is as petite as the iPhone SE and offers even remotely close value. On the other hand, for a general user, the display of the OnePlus Nord is clearly better, be it reading, watching videos, clicking pictures, everyday stuff. There is a reason that phones are getting bigger and bigger. It’s because people prefer larger displays. And when you look at it from that angle, the OnePlus Nord clearly takes this one home. 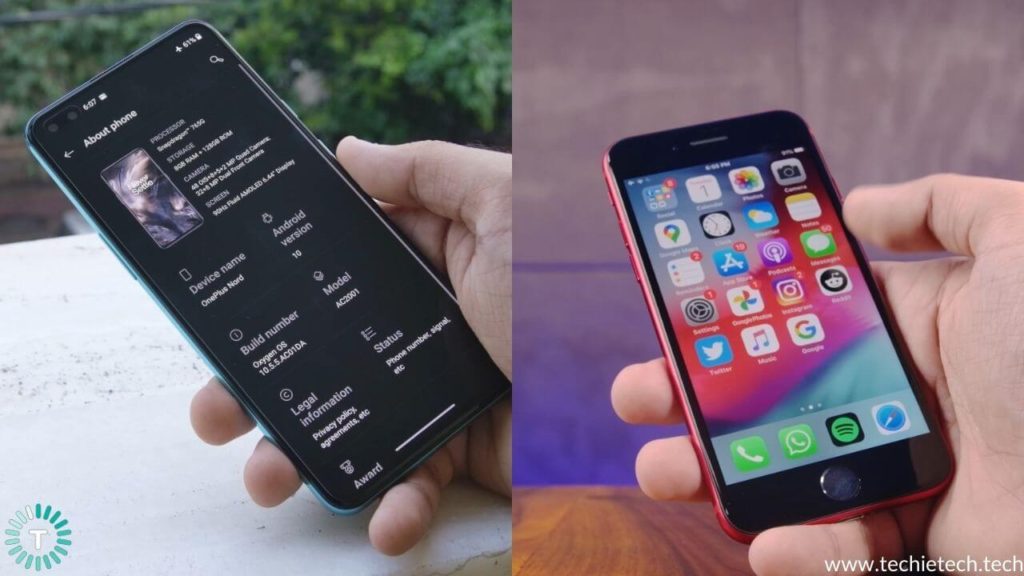 Let’s talk a bit about the performance now. This one is easy. See, the major selling point of the iPhone SE is the fact that it has the iPhone 11’s processor inside it. The same processor which is said to be more powerful than flagship Android processors like the Snapdragon 865. The OnePlus Nord has the Snapdragon 765G processor which is a more mid-range processor. You see where this is going. In terms of pure numbers, the iPhone SE crushes the OnePlus Nord. Heck, it might even defeat the more expensive OnePlus 8 Pro. It is because of this processor alone that Apple has been able to blow a new life into what is essentially an iPhone 8. You have a 5 year software update cycle, much better image and video processing, excellent gaming performance, the list goes on and on.

Now, that is not to say that the OnePlus Nord is slow. In fact, for day to day use, I find it perfectly usable. For your regular texting, social media, Netflix and even a bit of casual gaming, the OnePlus Nord is adequately powerful and gets the job done. For memory management, I actually found the OnePlus Nord better with it’s vastly more RAM. Right now, both these phones are great performance wise. But, I have talked about this before. Power in a phone matters even if you’re not like a gamer or a power user. With major software updates every year, phones tend to slow down really quickly and the more powerful phone you have, the longer it will last while providing good performance. With that point of view in mind, the iPhone SE takes the win when it comes to performance. 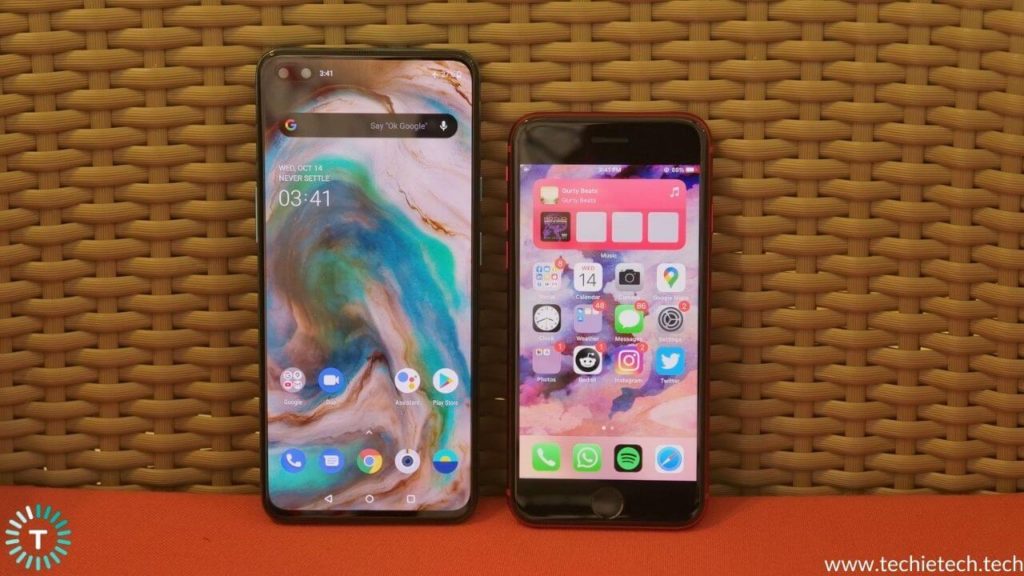 Let’s talk about the software now. This one is easy because it is purely personal preference. The iPhone SE with its new, powerful processor and Apple’s amazing optimisation provides an amazing software experience. It makes for an excellent starter device if you’re looking to experience the Apple EcoSystem. On the other hand, the OnePlus Nord with OxygenOS definitely provides the best of Android with minimal bloat, fast animations and just a very satisfactory overall experience. The only advantage which is objective here is the fact that the iPhone SE will get software updates for 1 or 2 years more than the Nord.

Another thing that could be considered is that iOS on the iPhone SE does not feel as modern because it lacks the Swipe Gestures Navigation from modern iPhones and brings back the home button. This was not problematic for me but could be for a certain set of users.

Otherwise, the iOS vs Android debate is pointless and endless. It is purely personal preference so make up your mind and once you’ve chosen out of the 2, pick either of these phones because both the OnePlus Nord and the iPhone SE do complete justice to their software platforms. 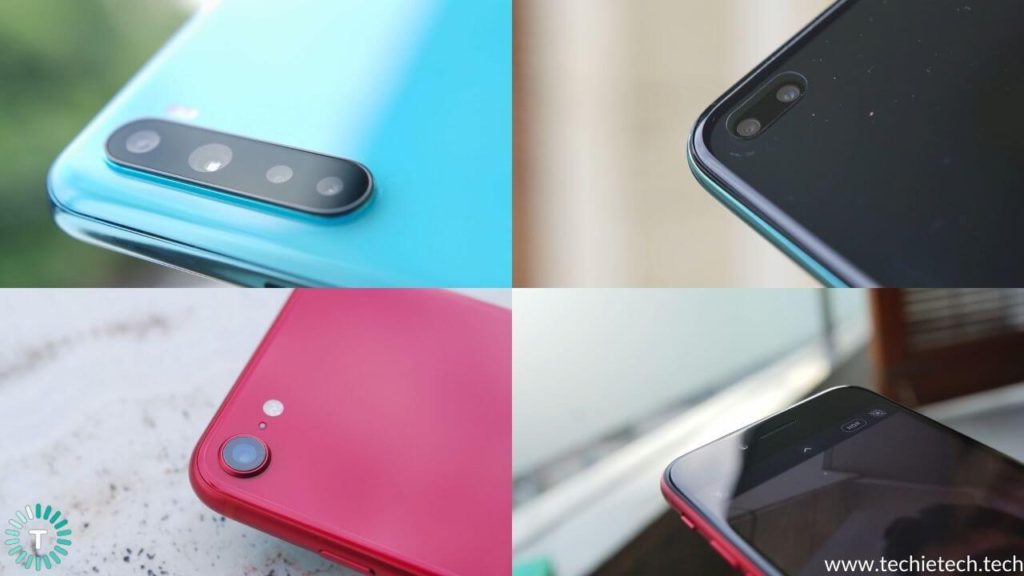 In terms of the variety of optics, OnePlus Nord is the clear winner with 4 more cameras than the iPhone SE- 3 on the rear and 1 on the front.

On the rear, the Nord has a quad-camera setup with a 48MP primary camera, accompanied by an 8MP ultrawide, 5MP depth, and a 2MP Macro camera. It also sports a dual selfie camera with 32MP and 8MP sensors.

On the other hand, the iPhone SE keeps it pretty simple and sports a single 12MP shooter on the rear with a 7MP camera on the front.

So, the Nord is the clear winner when it comes to the sheer number of sensors and optics. Therefore, for the sake of simplicity, we’ll be comparing the pictures and videos shot on the primary cameras only because when it comes to the other types of cameras on the Nord, the corresponding competition on the iPhone SE simply doesn’t exist.

So let’s find out how these devices perform out there. As always, we’ll talk about the photos first and the videos after that.

To sum things up, as I said before the OnePlus Nord provides a more versatile camera user experience while the SE is more suitable for the kind of folks who just want a great “point and shoot” camera

In my opinion, if you’re the kind of smartphone photographer who doesn’t want to deal with the technicals, the iPhone SE produces better results.

On the other hand, if you like to play around with the different settings and modes, I’d recommend that you go with the OnePlus Nord simply because there’s a lot more possibilities and a lot more to play with. 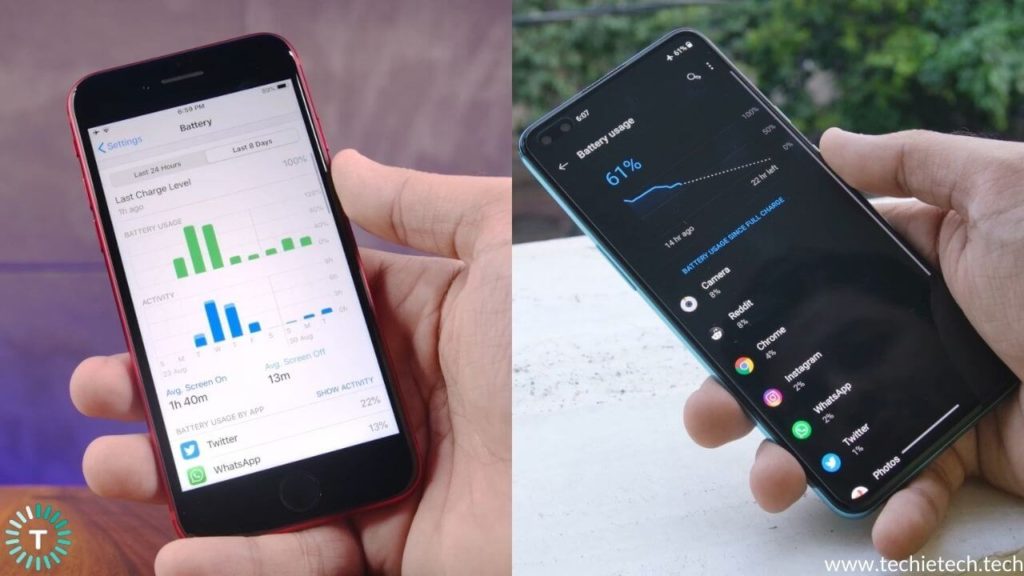 Let’s also take some time to talk about the battery life. It is an absolute binary choice here. The iPhone SE is average at best and in my usage, usually lasts a day, sometimes even less than that but seldom more than that. The OnePlus Nord, on the other hand, has shown that it is very good in terms of battery life, easily lasting through a day and sometimes even stretching to a day and a half. It is the clear winner here.

Another thing that I would like to point out is the speaker. The OnePlus Nord has a mono speaker while the iPhone SE has a stereo speaker. The difference is very obvious. I often found myself cupping my hand in front of the mono speaker of the OnePlus Nord to hear better. I did not have to do that with the iPhone SE because the earpiece speaker is already firing in your direction.

A somewhat similar observation was made when it comes to calling. In my experience, the iPhone SE held on to a signal better and the overall phone call experience was clearer comparatively. The earpiece on the OnePlus Nord gets the job done but is a little muffled in comparison to the iPhone SE. 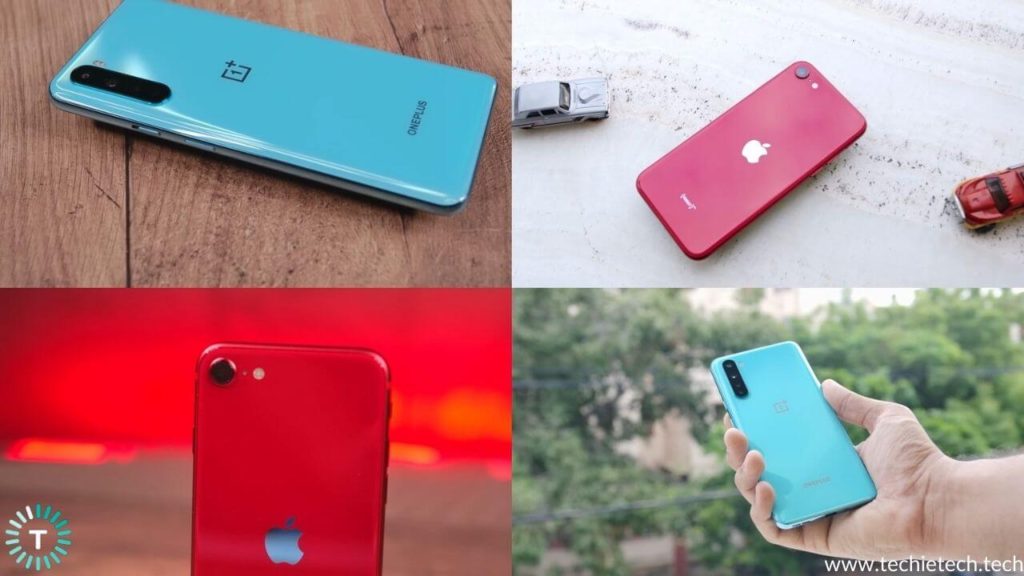 To conclude, should you pick the iPhone SE or the OnePlus Nord. It is a hard, hard choice to pick a clear winner here. On one side, you get Apple’s rock solid support, brand image, more power and more refinement. On the other side, you get a more modern design, a larger and better display, OxygenOS and much better battery life. Both are extremely good value for your money. It is a tough nut to crack, but while we’re here do let me know your pick out of the two in the comments section below.

iPhone 13 Battery Drain? Here are 17 ways to fix it