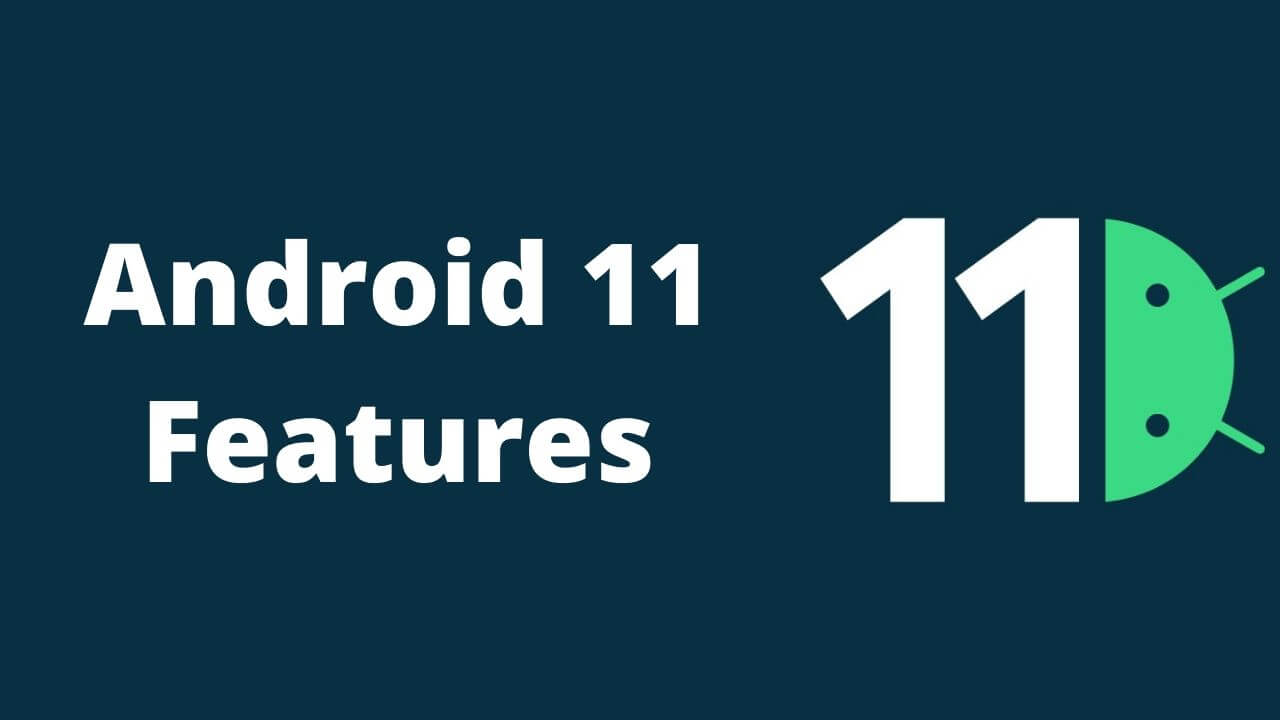 But this time, Google gave a beat to the clock and came up with the Developer Preview I of Android 11 before the expected time. And, it gave us a brief, first look at what Google’s 2020 operating system has in store for us. Although Android 11 will be modified and tweaked until its final release, we would like to share several features that you need to know about Android 11.

Google will hold a three-day developers conference- Google IO from May 12 to May 14. And, we can expect the Android 11 to release on day one of the conference i.e May 12, 2020.

We saw that Google launched smart camera features for its Pixel 4 smartphone in December 2019. And before that, Google introduced verified SMS and spam detection on Android.

We obviously know that the Pixel phones will be the first to get Android 11, somewhere around August or September.

After the Pixel series, smartphones from other brands will get Android 11 slowly over time. For Android 10, OnePlus 7T and OnePlus 7T Pro were the first non-Google smartphones that came with Android 10 in the box. It would be interesting to see which smartphone company gets Google’s 2020 OS  this time.

You would have noticed that if you put your phone to Airplane mode, it automatically deactivates your Bluetooth. As a result, you had to turn on Bluetooth again, which is obviously irritating. But, with Android 11, things would not be the same. Putting your phone on Airplane mode won’t kill your Bluetooth. And, this would definitely be appreciated by people who use Bluetooth to listen to music, while traveling.

Notches were introduced to eliminate bezels and Google offered notch/cutout API with Android 9. Thereafter, we saw different types of displays on the smartphone. We know curved displays look stunning, but sometimes they can be a little annoying to use. The apps and keyboards spill over edges, which makes it difficult to use. And, things get more annoying, with accidental touches, which ends up ruining the user experience. But now, Google has come with a new API, which will let developers specify the screen area for interaction.

Google introduced this feature to be a part of Android 10, but not many developers or OEMs actually adopted it. With the introduction of new Bubbles API for notifications in Android 11, you can keep several conversations easily accessible anywhere through a floating bubble. And, by tapping on the bubble, you’ll see the past messages, and a text field to send a new one. Bubbles are a quick way to fire off a message, without opening the application. However, to access all the features and settings, you’ll have to open the application.

There was another feature that was introduced in Android 10 but was never completed- an automatic switch for the dark mode. We’ll see a new feature with Android 11- dynamic system-wide dark mode, which offers the ability to automatically activate and deactivate the dark mode depending upon the time of the day.

Android 10 offers you the ability to grant certain permissions like access to location, camera, or microphone, only when the app is open. But with Android 11, you will be able to grant these permissions on a one-time basis, which will offer you more security. The minute you move away from the app, the permissions are revoked, and you’ll have to re-approve, to allow the permissions next time. The iOS devices already have this feature.

This is one of the most awaited features for Android users, and we hope Google finally adds the Scrolling screenshots feature for real in Android 11. It will let you capture more vertical content on your phone’s screen, without the need to take multiple screenshots or using 3rd party apps.

The custom flavors of Android, including Samsung OneUI, Oxygen OS, and HTC’s ROM, have got this feature for years now. We hope this feature is finally added to the Stock Android as well.

It feels so irritating when you’re trying to capture an amazing photo or shooting a video, and you get interrupted with notification pop-ups. Fortunately, Google is introducing a new API in Android 11 that mute notifications, alarms, and ringtones, while the camera is open. This is definitely going to make the Android users super-happy.

Do you apply a tempered glass on your smartphone to make sure that the real glass is never damaged, but end up facing issues for miss swipes and touches? If yes, you will surely fall in love with this feature of Android 11. Google is incorporating better touch sensitivity in Android 11, which will let you experience flawless touches all the time, even with tempered glass.

Apple introduced native screen recording in iOS 11, launched back in 2017. Also, several Android skins, including Samsung OneUI and Xiaomi MIUI have support for recording the screen. This is something that every Android user has wished for, and finally, they’ll be getting this feature with Android 11. You’ll no longer need third-party apps to record your screen.

Scoped storage could have been a part of Android 10, but Google put it on standby and took time before making this feature available on Android devices. Introducing in Android 11, the scoped storage feature aims to optimize the speed of memory reading and protect user’s private data. The apps will now only have access to certain parts of the filesystem, and this will “silo” apps for better protection. Talking in simpler terms, a second folder will be created, dedicated to the files, created by the app in use. Only the concerned app can read and overwrite any file without the user having to grant the permission. As a result, this feature will make the reading process faster, while focusing on security.

With Android 11, we’ll see an option to share battery, just like Samsung’s flagship smartphones, including the recently launched Galaxy S20, S20+, and S20 Ultra. You’ll see a feature called Battery Share in Android 11 settings, which will allow reverse charging on your smartphone. The future Pixel phones will come with reverse charging, and Pixel 5 is the first one to get this feature.

Android 10 introduced the ability to download Android update parts directly from Google’s Play Store. And, Android 11 will take it further by allowing even more Android parts to get updates without having to send the complete Ota package.

Android 11 brings a piece of great news for the Pixel 4 users. Google is introducing updates in Android 11, which will let you make the most of your Pixel 4. You’ll be able to interact with apps, without really touching the screen. With Android 11, you can tap the air above the phone to pause your music.

Android 11 will come with support for new technologies, including 5G networks, and foldable displays. Even Android 10 smartphones are capable of connecting to 5G networks, Android 11 will introduce a couple of changes to give you a better experience with the latest technologies. Android 11 will feature the Dynamic Meterdness API, which will check if you’ve unlimited 5G connection. If so, you’ll be able to take full advantage of the speeds by accessing higher resolution graphics and video. Also, there would be the Bandwidth Estimator API, which will make it easier to look at downstream and upstream bandwidth for a 5G connection.

It seems we’ll witness more 5G compatible smartphones, once a stable version of Android 11 rolls out.

When was the last time you got your flight tickets printed? You don’t remember that, right? With everything being able to live digitally on your smartphone, the need to carry the originals have been reduced to a great extent. With Android 11, steps are being taken to digitize your driving license too.

There are a lot of regulations and red tape that had to be dealt with by the government. When the digital driving licenses becomes the standard, Android 11 will let your smartphone support them.

What do we want to see in Android 11?

For years now, Apple’s iOS users have been using AirDrop to send photos, contacts, and other data wirelessly amongst them. A similar feature was introduced for the Android users- Android Beam, from Ice Cream Sandwich onwards. But, it was extremely slow, required physical contact between the devices, and was eventually removed in Android 10. Right now, there’s no equivalent of Apple’s Airdrop feature in Android. Third-party apps have to be used to transfer files between the Android devices.

It was discovered that Google was developing a feature named Fast Share, which would allow nearby Android devices to transfer files over a direct WiFi connection. It would be great to see this feature in Android 11.

It’s worth mentioning that unless you’re a developer working on apps that will run on Android 11, you should not download the Android 11 Developer Preview I.

For downloading Android 11, you’ll need a Pixel 2 or a later device. Do remember the process is a bit more complex than downloading an OTA update. The developers would download Android 11 without any hassle. And, if you’re new to downloading such updates, follow these steps to get your job done.

And, if you are not a developer but you want to try Android 11, please wait a little longer, as Google is expecting to open Android Beta enrollments in the next several weeks.

That was all for the Android 11 features right now. Let us know which feature did you like the most from the list above. Also, what features do you want Google to implement in Android 11? Do share your thoughts on the same in the comment section below.