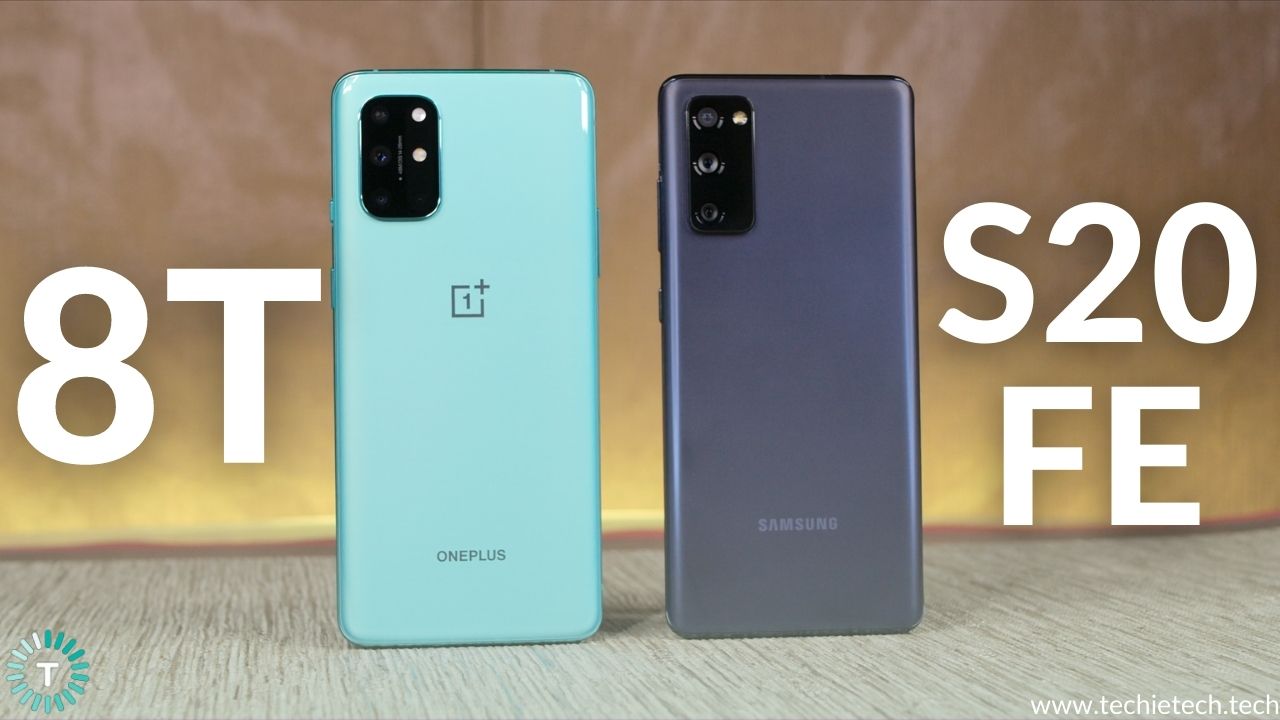 It’s official. Samsung and OnePlus are officially at war. While OnePlus has been attacking Samsung in their home turf of the Android flagship with their flagship OnePlus 8 Pro, Samsung has been retaliating with cheaper flagship killer phones like the Galaxy S20 FE. Let’s compare them, with a comparison between the OnePlus 8T and the Galaxy S20 FE.

A quick look at both these phones and they look like they are inspired by the same design language. Both have an extremely similar design with a rectangular camera module on the top left. The OnePlus 8T is offered in 2 color options- blue and silver, while the S20 FE gives you a more wide array of options to choose from. 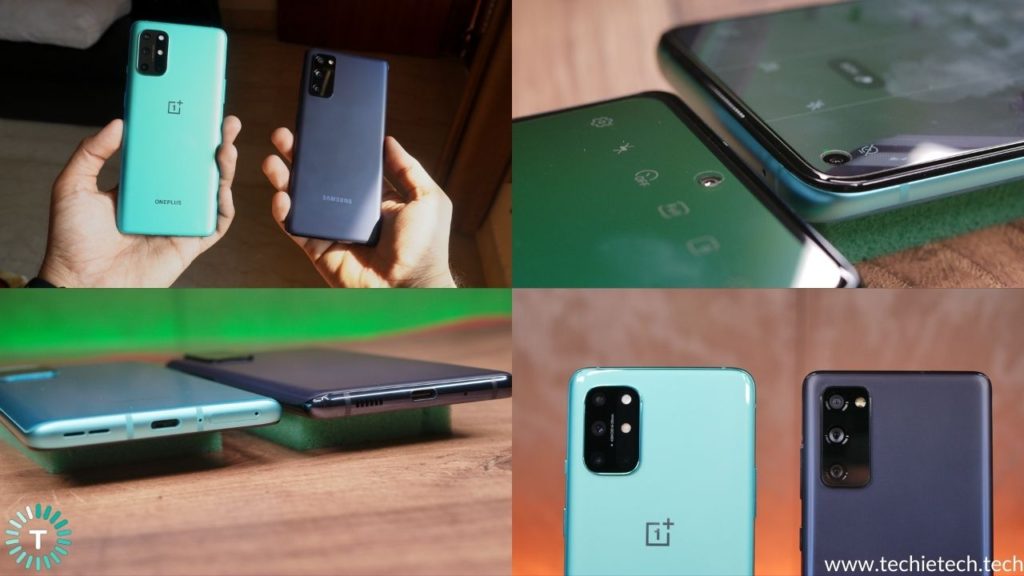 It’s when you hold them that you realise how different the two are. The glass back on the OnePlus 8T combined with the matte aluminium sides feel much more flagship-like compared to the plastic or glasstic back on the S20 FE combined with the glossy aluminium frame. There’s a reason Samsung and basically everyone uses glass on their more expensive flagships, it just feels more luxurious.

But that does not mean that a plastic back does not come with its own advantages. Far from it. For one, the S20 FE is far more likely to survive drops compared to the OnePlus 8T or any glass backed phone for that matter. The plastic back also allows the S20 FE to be more robust and abuse friendly and it is definitely the phone which I would be more comfortable carrying without a case.

In true Samsung fashion, the Galaxy S20 FE has an IP68 Rating for dust and water resistance. In true OnePlus fashion, the OnePlus 8T includes no official rating to cut costs even though they have been known to include some sort of dust and water protection. One factor in OnePlus’ favour is that the 8T has used Gorilla Glass 5 on both the front and the back. Samsung has used the cheaper Gorilla Glass 3 on the front and even cheaper plastic on the back.

Flip over to the front and we have a flat, bezel less display on both phones. The OnePlus 8T has a selfie camera punch-hole cutout on the top left compared to bang in the middle on the S20 FE. Here is another one of my biggest caveats with the S20 FE. Let us focus on that camera hole. It has this shiny metal ring in it which stands out even when the display is off. I just cannot ignore it. I have had instances where I am using the phone and there is light shining on the metal ring in the punch hole which is really distracting. 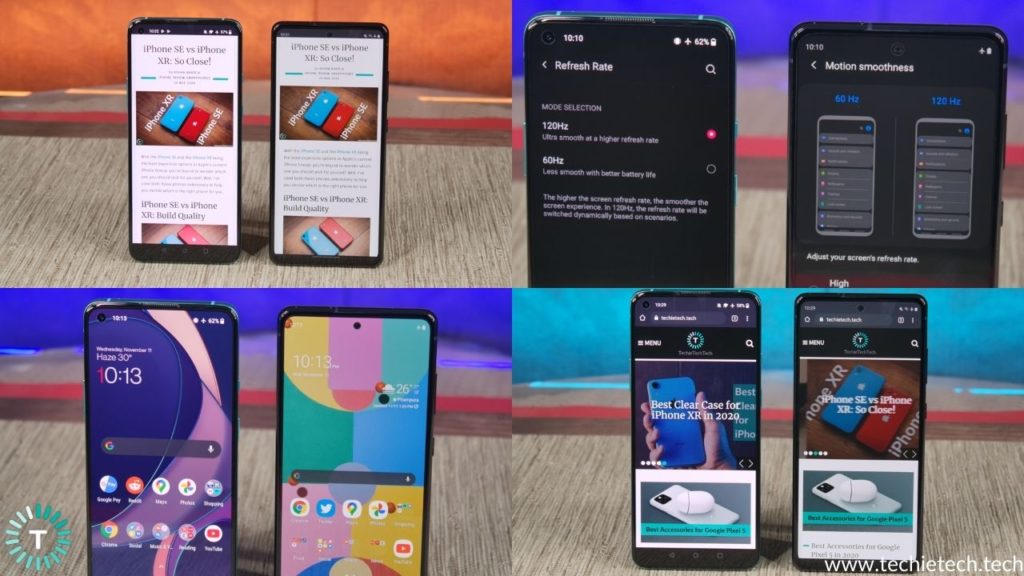 If you look at the OnePlus 8T in comparison, with the display off, the dark selfie camera cutout blends in to give a more seamless look. Even when you’re using it, the selfie camera here is much easier to forget and ignore than on the S20 FE. I don’t know what Samsung was aiming for here and I don’t even know if this bothers only me or other users too. But what I do know is that it seems Samsung has deliberately cut a few corners here to make the S20 FE feel and look less premium than their more expensive phones like the Galaxy S20.

Let’s talk about the actual display quality. Both phones have an AMOLED panel with the same resolution, the same 120 Hz refresh rate and roughly the same size. They are extremely similar displays on paper and should provide a somewhat equal experience. And for the most part, they do. Here’s where they do not. Firstly, I have experienced a number of touch screen issues with the S20 FE. Some Googling around showed that I am not alone and a lot of users have also complained about experiencing something similar. Samsung has acknowledged it and will try to fix it with a software update.

That’s not all unfortunately. The S20 FE’s panel is just not as vibrant or bright as the panel on the OnePlus 8T. Samsung also does not allow you to permanently set the display to 120 HZ all the time, only giving an adaptive refresh rate option. This problem simply does not exist on the OnePlus 8T, where you can set the display to 120 Hz permanently. I never thought a day would come when I would pick any other display over a Samsung phone’s panel, but it seems that day is here. The display experience on the OnePlus 8T is simply better and I prefer it over the one on the S20 FE.

Let’s move on to the performance now. The S20 FE LTE we have here has Samsung’s in-house Exynos 990 processor which is great for day to day use like Social Media, Texting, Browsing and even occasional gaming. However, it is not suitable for power intensive tasks like heavy gaming or video editing as it leads to thermal throttling.

If you can, get the S20 FE 5G instead, which has the faster and more efficient Snapdragon 865 processor. This processor makes the phone powerful enough to run the most intensive of games and apps without any issues. Unfortunately, the S20 FE 5G is not sold in a lot of regions, like here in India.

With the OnePlus 8T, you get the Snapdragon 865 everywhere and in every variant. It is a performance beast. Be it day to day use or heavy gaming or video editing, the OnePlus 8T takes on everything like a champ. Speed and fluidity has always been one of the main highlights of the entire OnePlus experience and that is also the case with the OnePlus 8T.

If you are a heavy gamer or someone who prioritizes fast performance, the OnePlus 8T is more suited to you compared to the S20 LTE. On the other hand, if your smartphone usage is mostly social media, Email, web browsing, texting and casual gaming the S20 FE is more than capable for your needs.

If you are considering the S20 FE 5G instead, its performance is at par with the OnePlus 8T and I’m sure you will be fine with either.

Let’s talk about the software experience. The S20 FE runs OneUI whereas the OnePlus 8T runs Oxygen OS 11. Both of these software experiences have a lot of ups and downs but what I can conclusively tell you is that these are my personal top 2 favourite Android Skins. Samsung’s OneUI has evolved a lot from the laggy mess that was TouchWiz. It feels more well put together and mature now. While Samsung includes a lot of useful features, they also include a lot of bloatware. For every Google service, Samsung has an alternative of their own with the Samsung Internet browser for Google Chrome, Galaxy Store for the Play Store and so on. But some users prefer using some of these Samsung services, so maybe it is unfair to rule them out as bloat without a try. 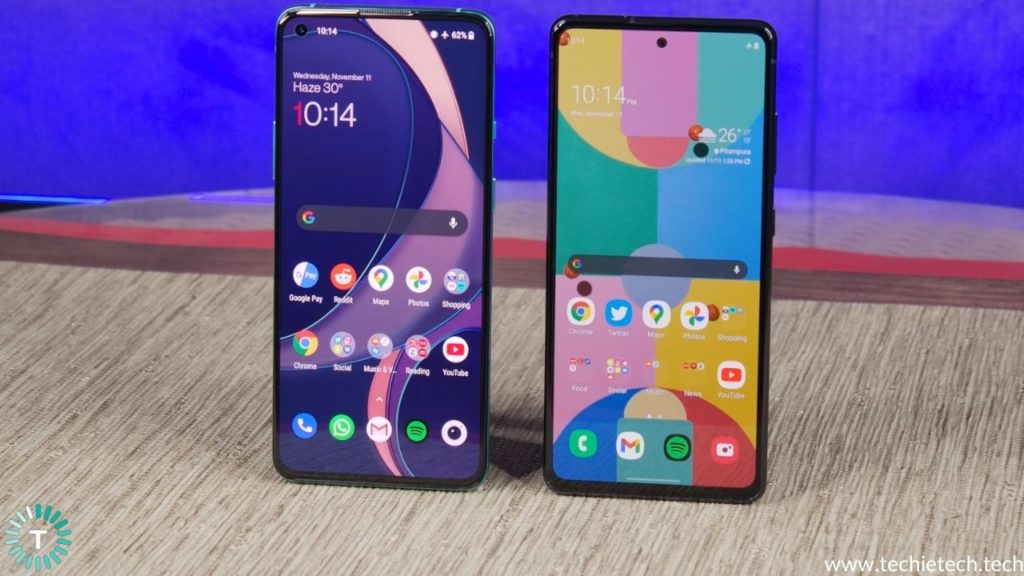 Oxygen OS is a bit of a different story. Oxygen OS 11 is comparatively very light. I can confidently tell you that it is the fastest feeling Android skin today with smooth animations, great optimisation and an overall lag-free experience. One thing to keep in mind is that a lot of people don’t like the somewhat funky design language on Oxygen OS 11 which is a departure from the Stock Android look of Oxygen OS 10. I personally don’t mind it very much but this is personal preference.

If you want the more feature rich, more mature Android skin of the two go for the S20 FE with Samsung’s OneUI. On the other hand, if speed, performance and minimal bloat is more your thing, you cannot go wrong with the OnePlus 8T.

Let’s talk about the cameras now. In terms of optics, the 8T sports a quad-camera setup with a 48MP primary shooter, a 16MP ultra-wide, a 5MP macro, and a 2MP monochrome depth camera. The S20 FE has a triple camera setup with a 12MP primary camera, a 12MP ultrawide, and a dedicated 8MP telephoto camera. 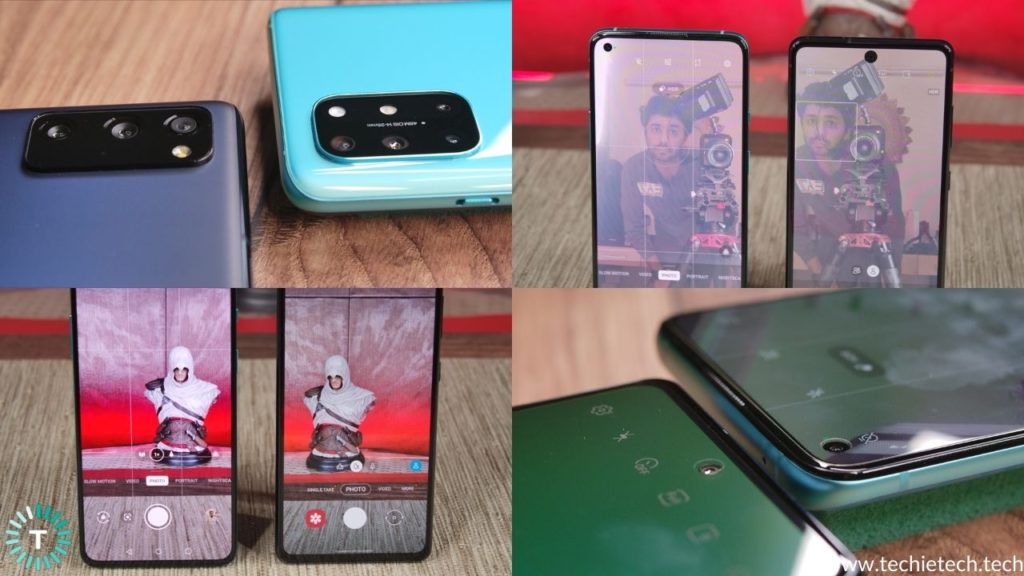 On paper, the OnePlus 8T certainly has an edge with a commonly used primary sensor and a higher number of cameras while the S20 FE has larger sensors. Let’s find out how they perform in real life.

To conclude, while the OnePlus 8T has an above average camera system which should be enough for most casual social media users, the S20 FE has Samsung’s flagship-level image processing and better hardware which delivers objectively superior pictures & videos to make it the clear winner in this department.

Moving on to the charging situation, both phones offer decent battery life with around 4.5-5 hours of screen on time or roughly a day’s worth of mid to heavy usage.

What’s not the same though is the charging situation. While the Galaxy S20 FE supports 25W fast charging, Samsung includes a 15W charger in the box, so you’ll have to buy a 25W power brick separately to use the fastest charging option. 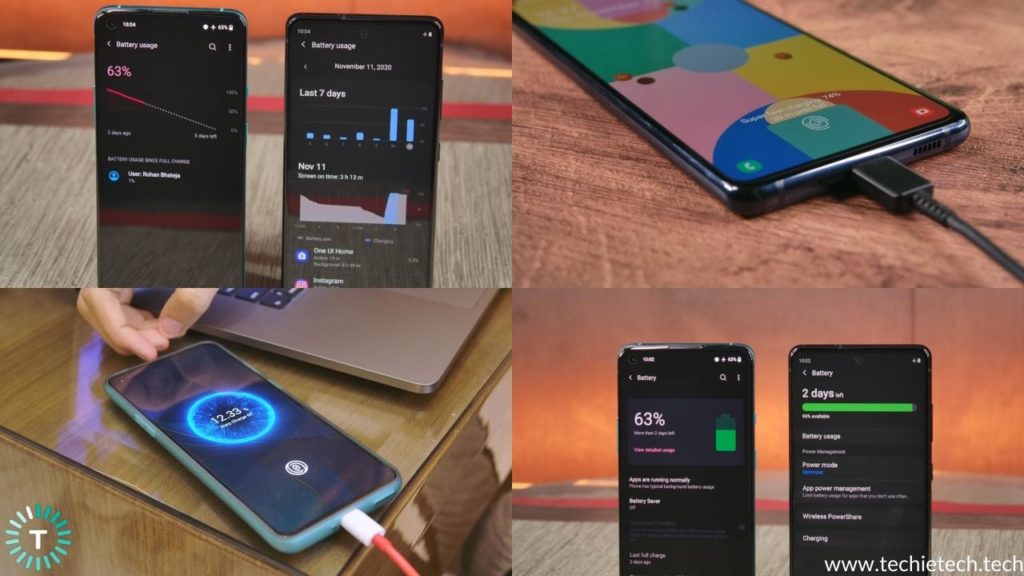 The OnePlus 8T on the other hand, supports OnePlus’ Warp Charge 65 which is basically the fastest charging ever on a smartphone. I have seen it charge from 0 to 50 in 15 minutes and from 0 to 100 in 40 minutes with my own eyes. What’s more, they include the 65 W adapter in the box which is awesome.

Both phones have an optical fingerprint scanner. Both have roughly the same performance in terms of speed, reliability and accuracy. The OnePlus 8T’s sensor feels faster in real life usage but that’s probably because of the faster animations on Oxygen OS than actual recognition speed. 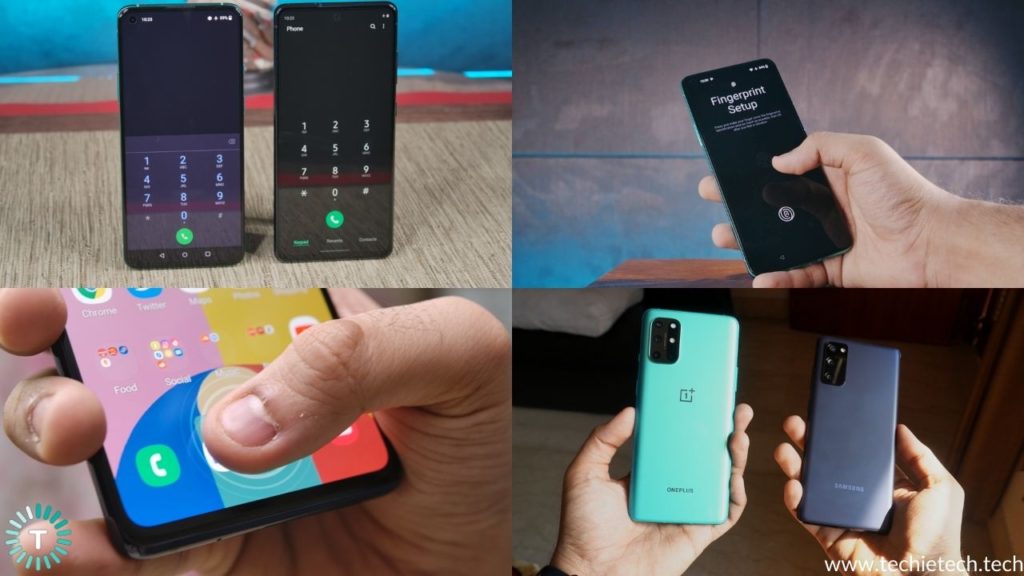 The Phone call experience is better on the Galaxy S20 FE. It holds on to a signal better and is also having the better earpiece with more clarity. Don’t get me wrong, that absolutely does not mean the OnePlus 8T is bad at phone calls. It is actually pretty good by itself, just that the S20 FE is better.

Galaxy S20 FE vs OnePlus 8T: Which one should you buy?

In conclusion, should you buy the OnePlus 8T or the Galaxy S20 FE. The choice between these 2 phones is quite easy actually. The S20 FE is the more loaded phone in typical Samsung fashion with a feature rich ecosystem, much better camera experience, IP 68 Rating and wireless charging. The only area where I cannot recommend it is heavy gaming or basically any performance intensive task because of the Exynos processor. That problem vanishes away with the S20 FE 5G, if you are able to buy it where you live.

On the other hand, the OnePlus 8T nails the essentials with a beefier processor, much faster charging and better display. It also has a lighter and smoother software experience which stays that way even after years of use. If you’re someone who wants the fastest, lightest experience Android can offer or if you’re a hardcore smartphone gamer, the OnePlus 8T is clearly the better choice for you.