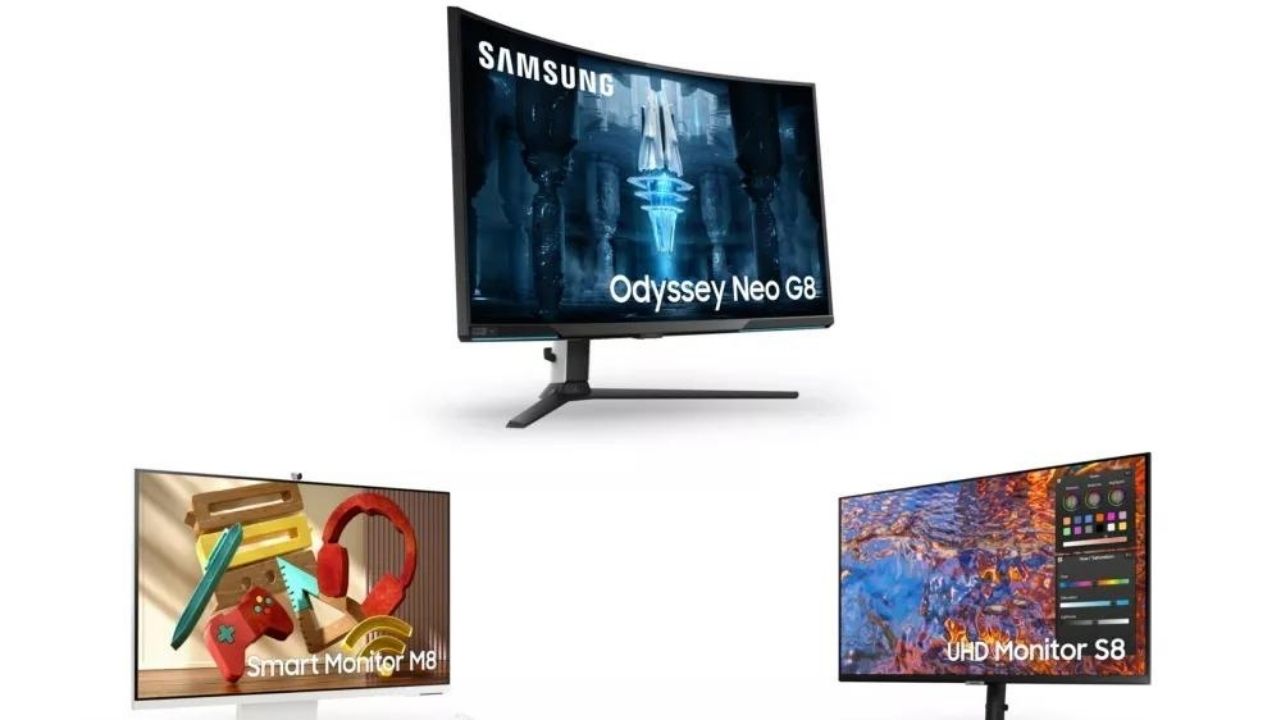 So far, Samsung’s Odyssey monitor portfolio for gamers has consisted of the large 49-inch Odyssey G9 and Neo G9, as well as the smaller 28-inch Odyssey G7. Samsung announced the Odyssey Neo G8, a new monitor that will sit in the middle of that series, on Sunday, ahead of CES 2022. Along with this, Samsung is also slated to unveil three monitors, including the 32-inch Samsung Odyssey Neo G8 monitor, which will boast the world’s first 4K display with a 240Hz refresh rate. With Quantum Mini LED backlighting, the monitor can reach a maximum brightness of 2,000 nits. Samsung also unveiled the Smart Monitor M8, which includes a webcam and Google Duo connectivity, as well as the UHD Monitor S8, which is geared towards content creators.

The monitor has a 1000R curvature, a 4K (3840×2160) resolution, a 240Hz refresh rate, and a 1ms response time. It is powered by Samsung’s Quantum Mini LED technology, which should produce deep, realistic blacks, as well as the company’s Quantum HDR 2000 technology, 2,000 nit peak brightness, and a million-to-one contrast ratio, just as the Odyssey Neo G9. The CoreSync lighting technology, which identifies colours on the display and projects them on the rear side of the panel for a more immersive experience, is another worth mentioning.

It includes Samsung’s Quantum Mini LED technology, which should deliver deep, realistic blacks, as well as Quantum HDR 2000, 2,000nit peak brightness, and a million-to-one contrast ratio, just like the Odyssey Neo G9. The CoreSync lighting technology is also worth mentioning, as it detects colours on the display and projects them on the back side of the monitor for a more immersive experience. The CoreSync feature changes the monitor’s RGB to match the information on the screen

Dual HDMI 2.1 connectors and a single DisplayPort 1.4 connection are also available on the panel. When a connected device is turned on, the Auto Source Switch+ feature switches sources automatically..

A second monitor,, was also unveiled by Samsung called the Smart Monitor M8 The 32-inch display has a 4K resolution and optional webcam functionality for video calling apps like Google Duo, which comes pre-installed. The Samsung Smart Monitor M8 can also be used as a smart TV, with apps like Disney+, Netflix, YouTube, and Samsung TV Plus allowing users to stream TV, video, and movies.

The Samsung Smart Monitor M8 has a brightness range of up to 400 nits and supports 99 percent of the sRGB colour gamut. The 2022 smart monitor is thinner than the existing M7 Samsung Smart Monitor model, with a thickness of 11.4mm. According to Samsung, users will be able to control SmartThings compatible devices and monitor their smart home gadgets via the SmartThings app.

Samsung’s third display is the UHD Panel S8, a 4K resolution monitor geared at content creators and designers who work with visuals for long periods of time. The monitor will be offered in two sizes: 27-inch and 32-inch, and will support 98 percent of the DCI-P3 colour gamut, as well as VESA and DisplayHDR 600 certification. According to Samsung, it has been certified as glare-free by Underwriters Laboratories (UL) and supports wired LAN.

The monitors will be available in the first half of 2022. During CES 2022, further information will be provided.