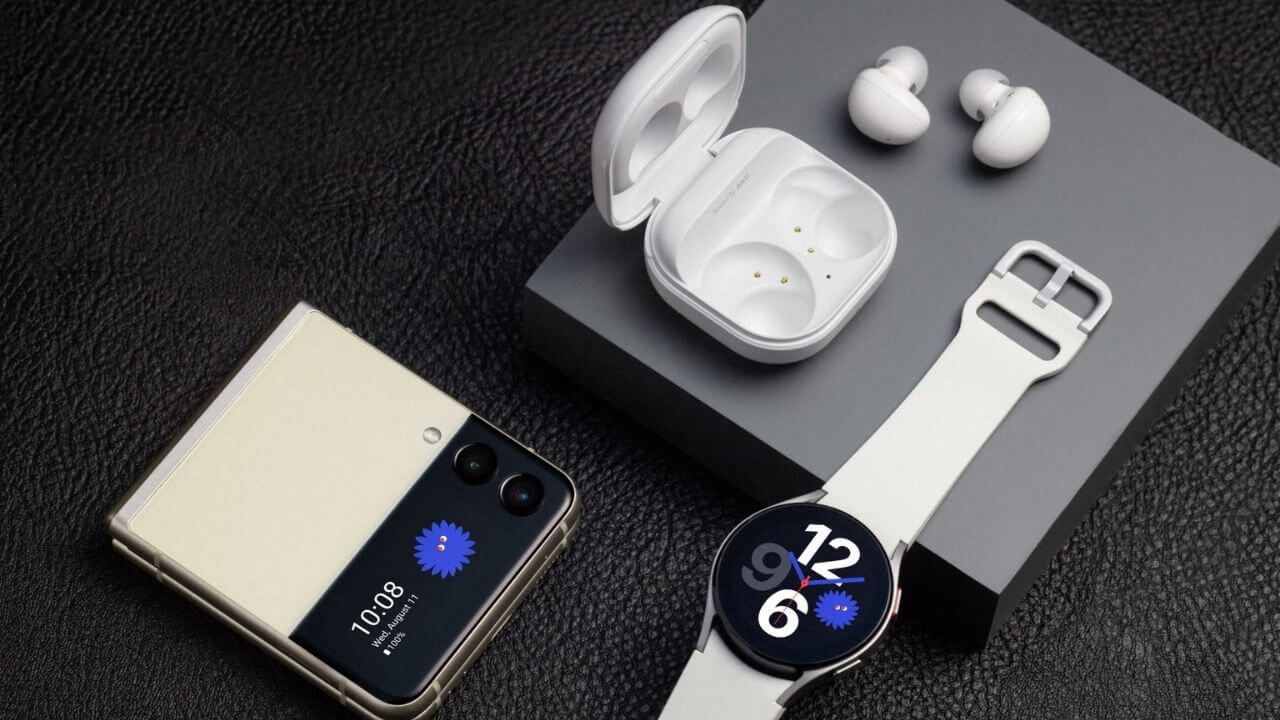 Before we move on to the earphones and smartwatch, let’s talk in brief about the two foldable 5G phones. The Galaxy Z Fold 3, the beefier successor of Z Fold 2, has made its way to the market with superior performance and flawless folding design. The addition of Gorilla Glass Victus on the inner and outer display ensures solid screen durability. Let’s not forget, this foldable king comes with an IPX8 rating for water resistance. The main highlight of the Galaxy Z Fold 3 5G is the addition of an in-display camera. Also, it comes with a powerful Snapdragon 888 chipset and a 12 MP triple rear camera. The base variant with 12GB RAM and 256GB storage is priced at $1799. In case you opt for the 512GB storage variant, it will cost $1899.

On the other hand, the Galaxy Z Flip 3 5G comes with similar features as the Z Fold 3, other than design and camera differences. It is the most affordable folding phone from Samsung. The base variant (8GB RAM and 128GB storage) of the Z Flip 3 is available for $999 and $1050 for the 256GB storage variants. If you want to know more about the specs and features of this sleek foldable phone from Samsung, make sure to read our news article about Galaxy Z Flip 3. Both the foldable phones come with Wi-Fi 6 compatibility. Not to forget, both the foldable phones do not come with a charger in the box, similar to the popular Galaxy S21 series.

Now that we have talked about the phones, let’s shift our focus to the earphones and smartwatches unveiled in the Samsung unpacked event.

Galaxy Buds 2 uses Bluetooth 5.2 that comes with support for AAC, SBC, and SSC (Samsung Scalable Codecs), which indicates that these earbuds can work effectively on Android, iOS, iPad OS, and Windows 11.

The Galaxy Buds 2 comes with a similar dual-driver setup as on the Buds Pro. This set of earbuds from Samsung features six microphones in total (three on each bud). It also comes with an Active Noise Cancellation feature that allows you to enjoy peaceful music and calling sessions in a crowded place. The Buds 2 also comes with Ambient Sound Mode to keep you aware of the surrounding noise. Other than this, the Galaxy Buds 2 has an IPX2 rating that ensures sweatproof protection.

You can grab the Galaxy Buds 2 earphones in Graphite, Lavender, Olive, and White colors for a price of $149 (in US). The pre-order of the Galaxy Buds 2 started on August 11, 2021, the day the Unpacked event was streamed. It will go on sale from August 28 2021 onwards in selected markets. As of now, there is no announcement about its price and availability for Indian users.

Besides Buds 2 and folding phones, Samsung also revealed two smartwatches: Galaxy Watch 4 and Galaxy Watch 4 Classic. Both the Galaxy smartwatch run on One UI Watch 3 based on the new Wear OS. The Watch 4 comes in 40mm and 44mm and the Classic is available in 42mm and 46mm.

Please note that both Galaxy smartwatches are compatible with devices running on Android 6 or more, with at least 1.5GB RAM. Galaxy Watch 4 and Watch 4 Classic come with a bunch of health and fitness features including heart rate, SpO2 monitoring, body composition and sleep analysis. These smartwatches from Samsung come up with the IP68 rating and military-grade protection ensuring water resistance and drop protection.

That’s all for now. We would like to hear your thoughts about the products launched by Samsung at the Galaxy Unpacked August event.