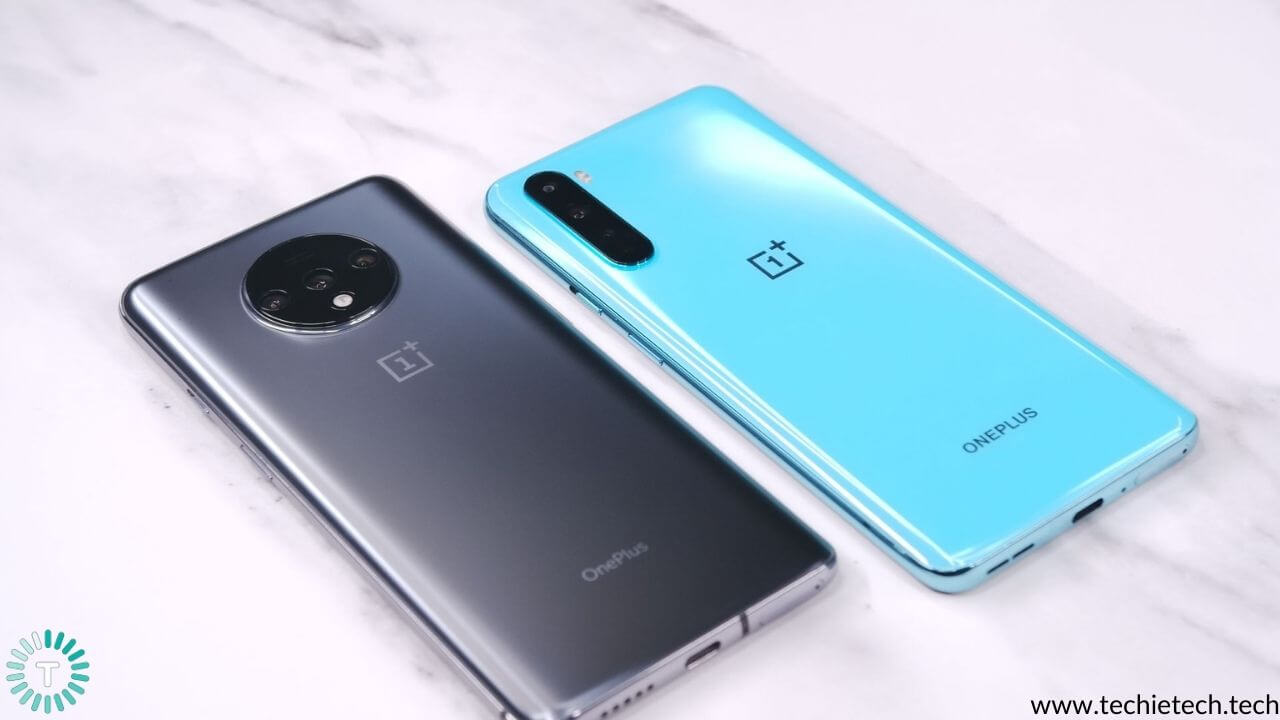 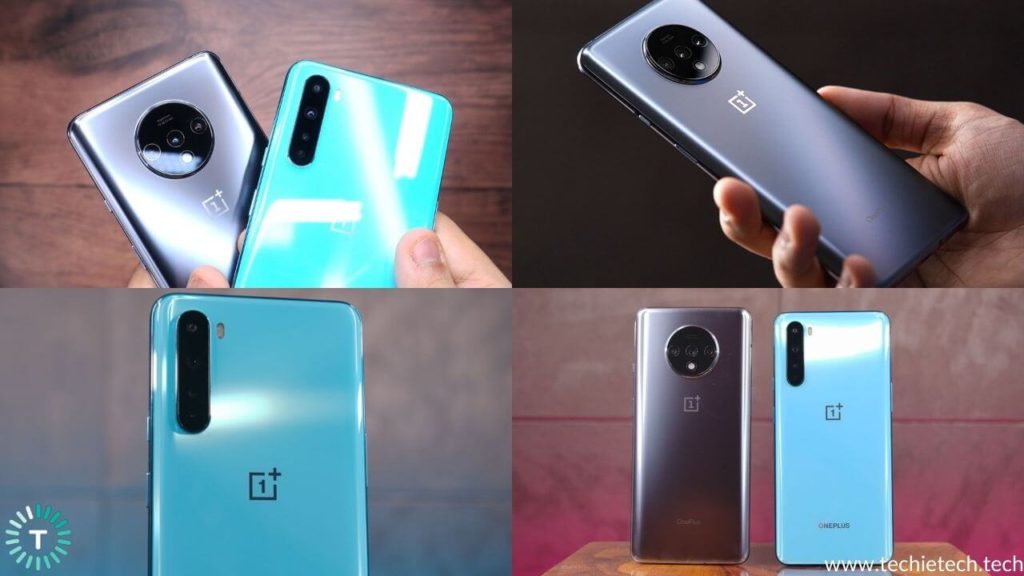 Let us talk about the in-hand feel and build quality first. The OnePlus Nord has a plastic frame with glass front and back. As a result, it feels less dense in the hand which doesn’t feel very premium or sturdy but at the same time makes one-handed usage easier. The OnePlus 7T’s build, on the other hand, is a far cry from the OnePlus Nord. There is matte frosted glass on the back compared to the glossy finish glass on the Nord. It feels and looks more premium and is certainly better at repelling fingerprints. This theme is repeated when the dense metal frame feels more premium than the Nord’s plastic frame. To sum it up, the OnePlus Nord feels like they were planning to make a mid-range device while the approach to the OnePlus 7T feels more like an attempt to make a flagship on a tight budget. That’s not to say that the OnePlus Nord feels bad or toy-like in hand, it’s just that the Nord is good but OnePlus 7T is better. Of course, all that becomes irrelevant if you are going to use a case anyway. 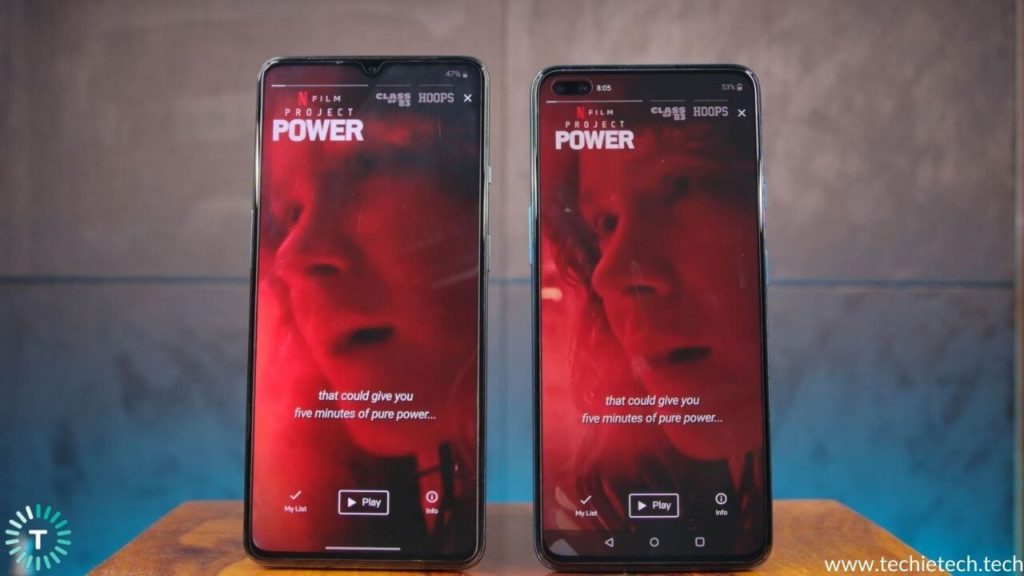 Moving on to the display, things are actually pretty close here. Both the phones have a 90 Hz refresh rate panel with the same resolution of 1080×2400. The display on the OnePlus 7T is a bit narrower and taller than the conventional smartphone which helps in gripping the phone but also makes reaching the top of the phone a session of thumb gymnastics. The Nord is better in this aspect. But there are a couple of issues on the OnePlus Nord display. Of course, these issues do not ruin the experience of using the device, in fact for me they are hardly noticeable though your experience may vary. The OnePlus 7T also has some tinting issues but they are far less noticeable than on the Nord. But in day to day usage, both the displays on these phones are neck to neck and so it would be safe to just call it a tie. 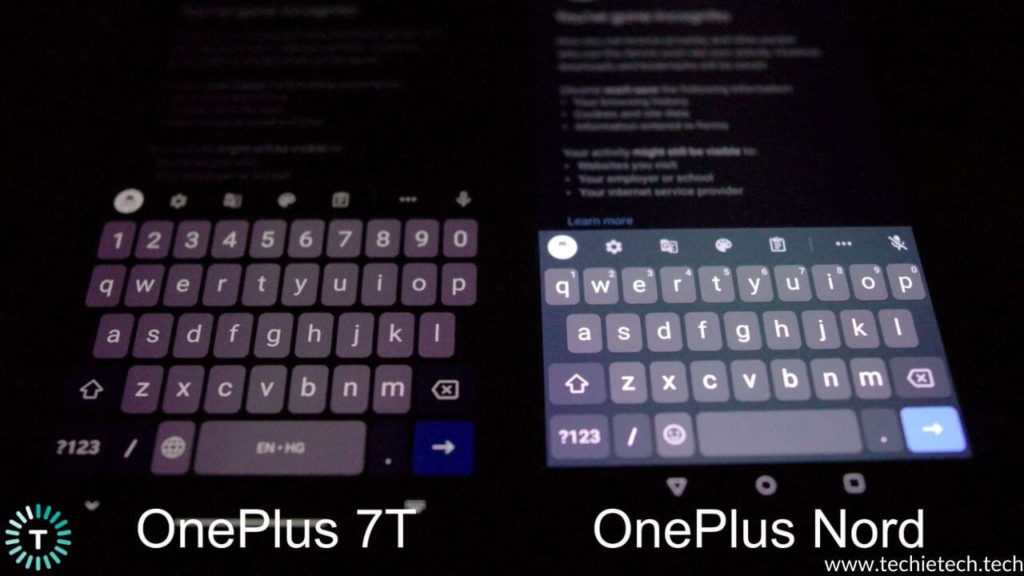 Let’s come on to the most striking difference now. The performance. Most of the people will tell you that you don’t really need that much power in a phone and powerful phones are for gamers. Well, that is true but only partly. As I have used the OnePlus Nord, there are a lot of times I see it struggling to maintain it’s composure, especially during scrolling at 90 Hz in apps with graphic-rich feeds like Twitter and Instagram. With OnePlus phones, I have said multiple times that I have never experienced lags, frame drops, or something of that sort but sadly, that has not been my experience with the Nord. But don’t get me wrong here, the Nord can still functionally do anything that the OnePlus 7T or any powerful phone can. It’s just that the powerful phones can do it more gracefully, especially when you have to power a 90 Hz display. Of course, in comparison to this average experience, the OnePlus 7T comes guns out with its flagship Snapdragon 855+ processor and faster memory. Anything you throw at it, it does remarkably well. 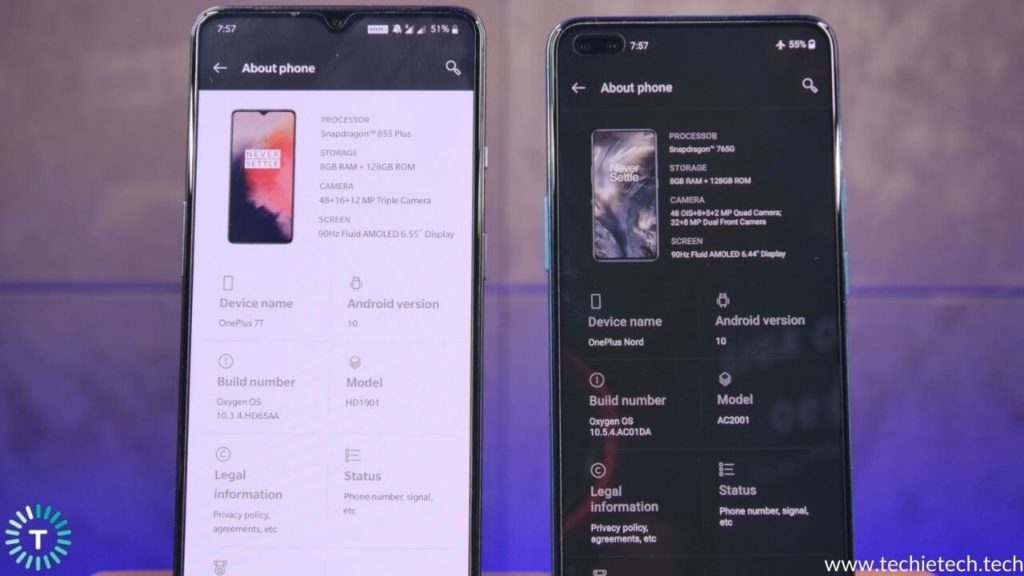 And this debate goes into the future as well. With the next version of Oxygen OS all set to be heavier and fancier, I am actually concerned whether the OnePlus Nord here will be able to keep up with its siblings. Situations like these prove that having a powerful processor is beneficial, not only for gaming but for day to day users as well.

There’s not a lot to talk about when it comes to gaming. You already know it, the OnePlus 7T is vastly more powerful than the Nord and it shows in gaming. Games run in max configuration on the OnePlus 7T while they run in a somewhat average configuration on the Nord. Not bad but not good either. I am sure you already know this, but for what it’s worth, if you want to game a lot on your phone or you like having a powerful phone which can handle everything, don’t even consider the Nord. On the other hand, if you don’t mind frame drops and can live with a few lags here and there, the OnePlus Nord is sufficiently powerful for your use and you can safely skip the OnePlus 7T, performance wise. 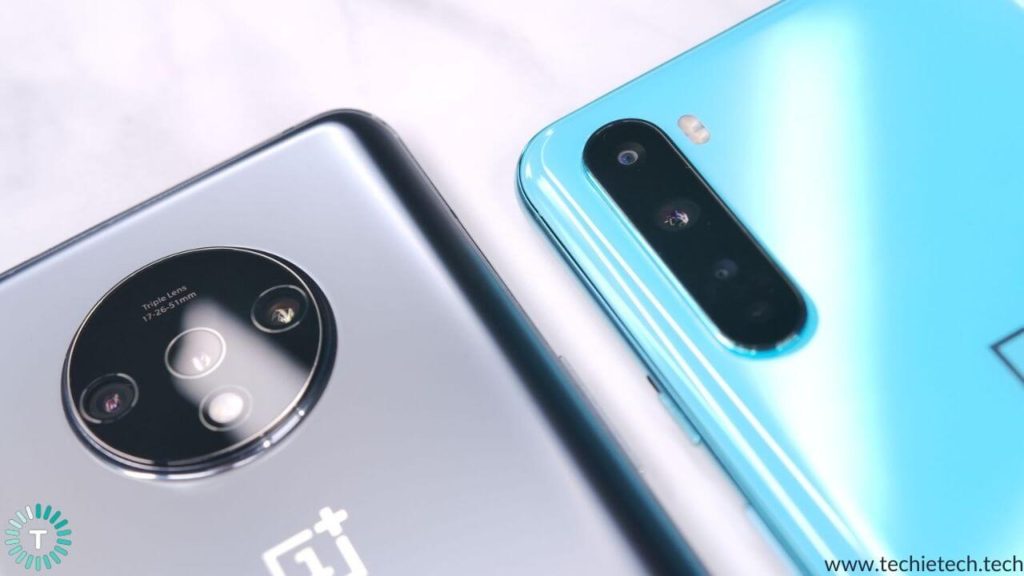 In terms of optics, the Nord lacks a telephoto lens but has a depth and Macro camera instead. Also, the Nord has been advertised to sport the OnePlus 8’s camera. Well, the OnePlus 7T also has the same main primary shooter. So, yeah, it all comes down to image processing.

The OnePlus 7T also takes decent videos and photos but the issues that plagued the 7T got fixed in the OnePlus Nord with better image processing and some optical upgrades. So, if camera is a priority for you, I’d suggest that you go with the OnePlus Nord. 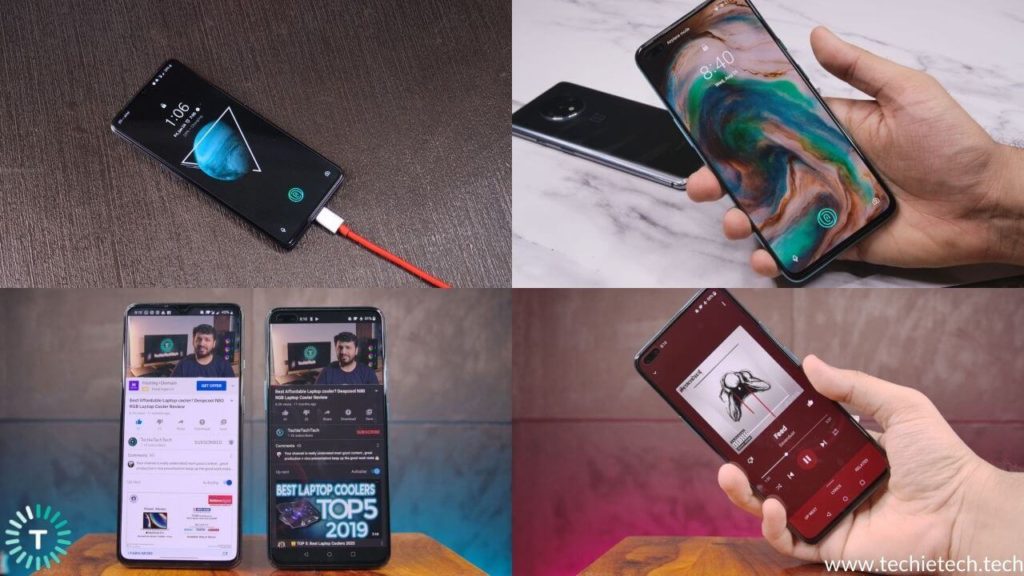 Apart from this, the OnePlus Nord and 7T both have very similar performing fingerprint sensors although I personally think that the position of the sensor is a bit too low on the Nord. I prefer the 7T’s placement over it. But usage wise, they are both the same. There is a mono speaker on the Nord which can get loud enough but I found myself cupping the speakers to hear better, especially when watching videos with vocals. The problem is somewhat automatically taken care of by the second earpiece speaker on the OnePlus 7T. 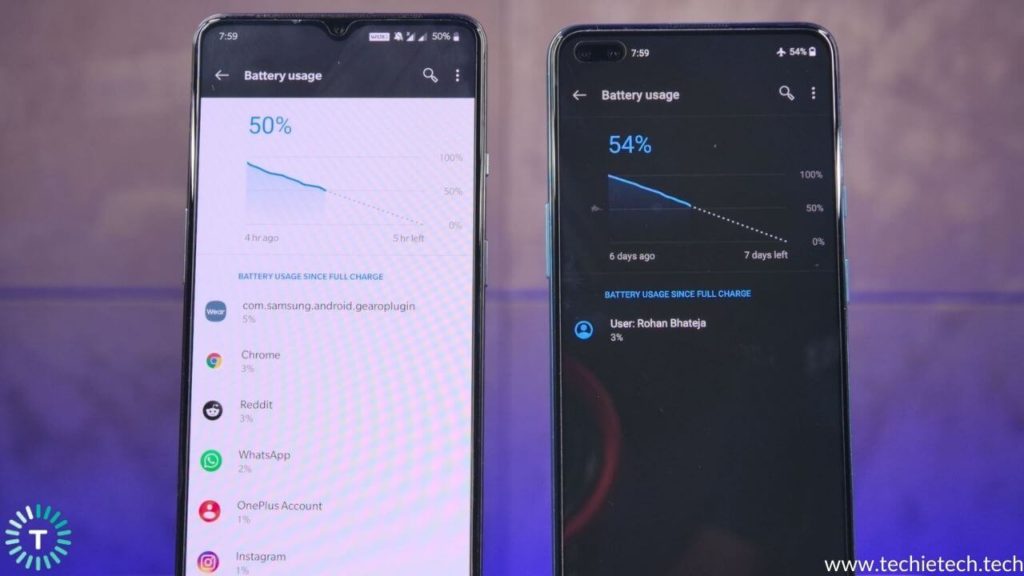 I also want to talk about the battery life. The battery life is perhaps the one aspect where the Nord is simply better than the 7T. It’s not that the 7T is bad, it’s just that the Nord is really good. I could get around 5.5 to 6 hours of Screen-on time compared to the 4 and a half to 5 on the OnePlus 7T. Simply put, the 7T could last a day with regular use while the Nord can stretch it to a day and a half easily. Both phones have Warp Charge support which is excellent and both have no support for wireless charging.

This is a hard one to conclude. See, objectively, the OnePlus 7T is clearly the better package and if you can stretch your budget to accommodate it, you definitely should. It was one of the best phones from 2019 and still shines really bright today. However, if you are a casual user, someone who just wants a reliable package for the basic day to day stuff and does not want to spend more than absolutely necessary, perhaps you could look at the OnePlus Nord.

If you’re looking for a phone for your Mom or a non-power user, perhaps the Nord is a more sensible choice. However, if I were choosing for myself, being a person who is obsessed with Tech, I would rather go for a used or refurbished OnePlus 7T in this budget than the Nord.