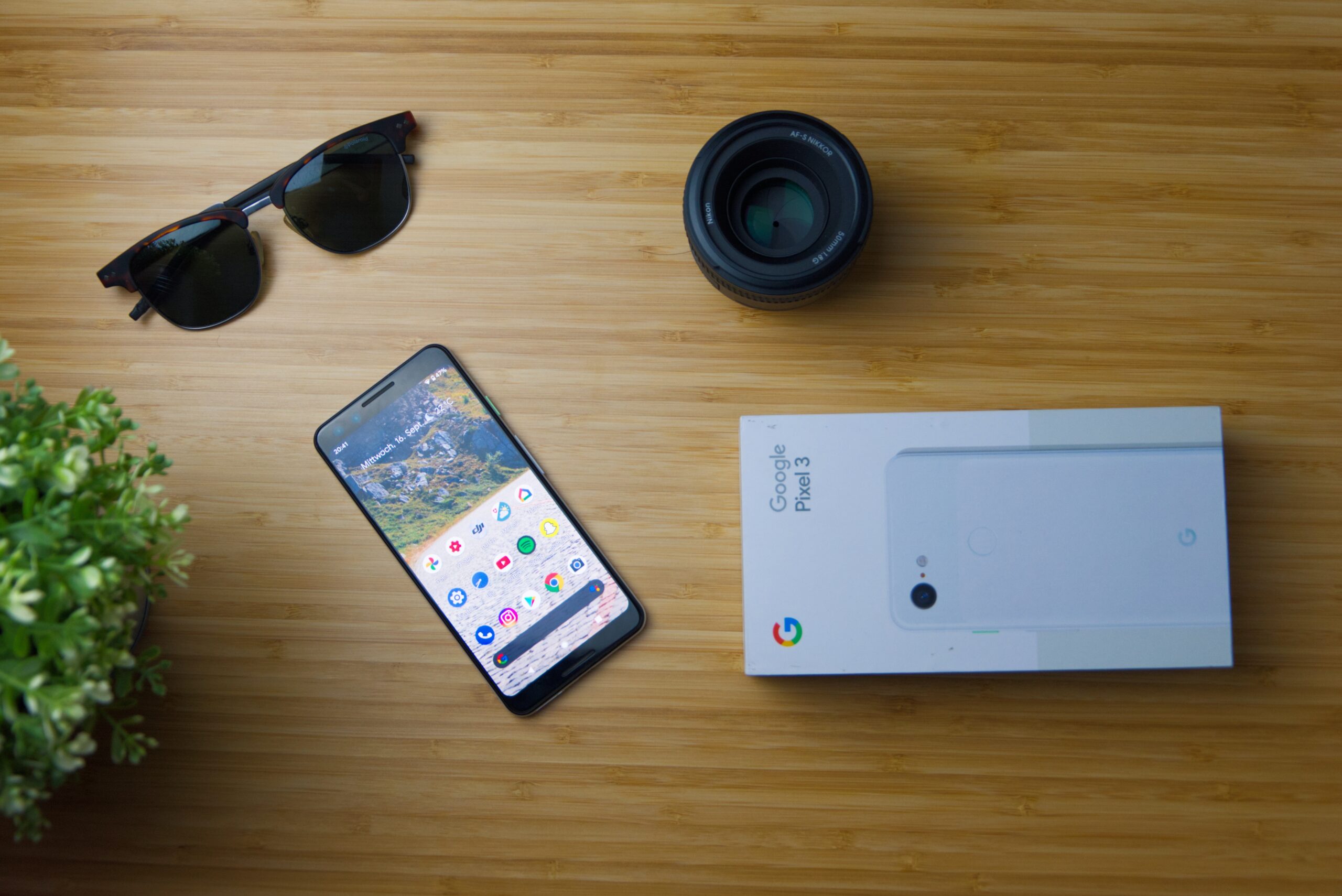 Photo sharing is becoming one of the most popular activities among users. There are many photo-sharing apps on the market, but nothing beats Google Photos. Users can share their photos with their friends and family using Google Photos. It also provides users with a free storage option, allowing them to save their favorite moments without worrying about running out of space.

Google Photos is used by a billion users on a variety of devices, including Android and iOS. Google Photos provides users with a plethora of features, including photo storage and sharing in high quality and raw format, along with a lot of advanced searches and editing features. Google Photos is simple to use and is well-known for its error-free storage capabilities. However, sometimes when users try to access it  on their Android devices, they may encounter a Google Photos not working issue.

The most common issues related to the largest photo-sharing app are:

These are some of the most common issues Android users face. If you did not find your issue in the above list, don’t worry, the following troubleshooting guide will help you. In this article, you’ll learn how to fix Google Photos not working issues on any Android device with ease.

Why is Google Photos not working on my Android device?

Before we begin, let’s take a look at some reasons why Google Photos isn’t working on Android. This issue might be related to:

There could be a more serious technical issue behind the scenes. Widespread outages caused by overcapacity or internal errors can leave you without Google Photos for hours.

If your Android smartphone starts acting strangely, it could be due to corrupted operating system files. Apps may fail to operate properly or functions may stop working as a result of corrupted Android OS files. Sometimes corrupted system cache or temporary files can affect the performance of other apps. It is possible that Google Photos might not be able to load your pictures due to problems with a corrupted cache.

All apps rely on the system or third-party programs or processes in some way. This results in a chain of dependencies involving a large number of programs. System programs and processes are typically coded for each device, making them less likely to crash. Third-party programs, on the other hand, frequently crash owing to optimization difficulties and other factors. If one of these apps or processes in the chain of dependencies fails, it might disrupt the entire chain, causing lag or app loading difficulties.

A third-party app is a piece of software developed by someone other than the maker of a mobile device or the operating system that runs on it. App development teams or individual developers, for example, develop a large number of apps for Apple’s and Google’s operating systems.

These companies also develop apps for their own products. It’s known as a first-party or “native” app in this situation. However, the great bulk of the apps accessible are third-party programs. In this case, Google Photos depends on multiple Google apps and services. If any crucial Google service, app or process stops working, this could lead to Google Photos being unable to upload or download your media.

A software bug is a defect or malfunction in a program that results in unwanted or erroneous outcomes. It’s a bug that stops the program from working properly, which is why Software upgrades are so important. All of these changes are intended to improve the user experience. While frequent update reminders might be unpleasant, especially if you have a number of different programs, they can enhance your overall experience and guarantee that you get the most out of your technology in the long run.

How to fix Google Photos not working on Android

Check the backup status before you start troubleshooting why Google Photos isn’t working on your device. This will help you figure out why the problem persists and how to fix it. Let’s take a look at this:

To begin, go to your device’s Google Photos app and login in with your Google account.

To check your backup status, click your profile in the upper right corner and you’ll see Manage your Google Account. These are some of the messages you might receive below that option, along with the solutions. 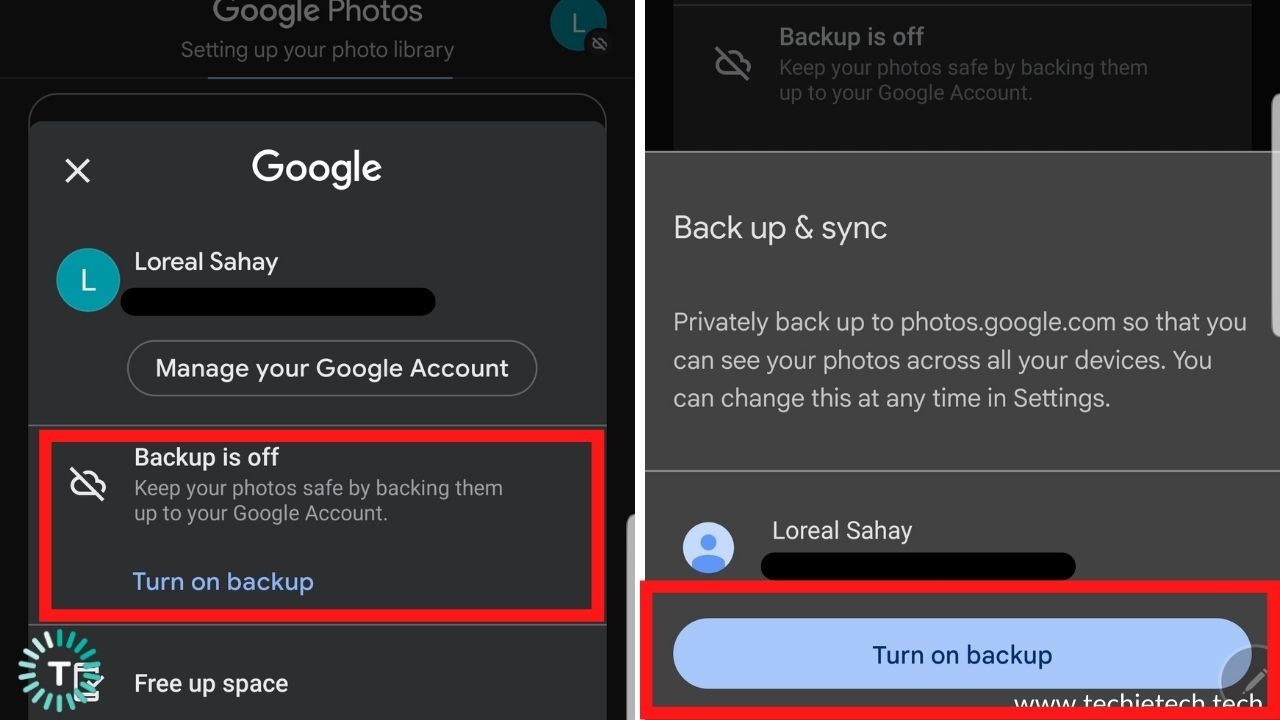 Also Read: Google Drive not working on Android? Here are 14 ways to fix it

Google Photos Sync is an important function for both uploading and downloading photos to and from your Android device. Make sure this critical feature is turned on before moving on to other options. Here’s how it works: 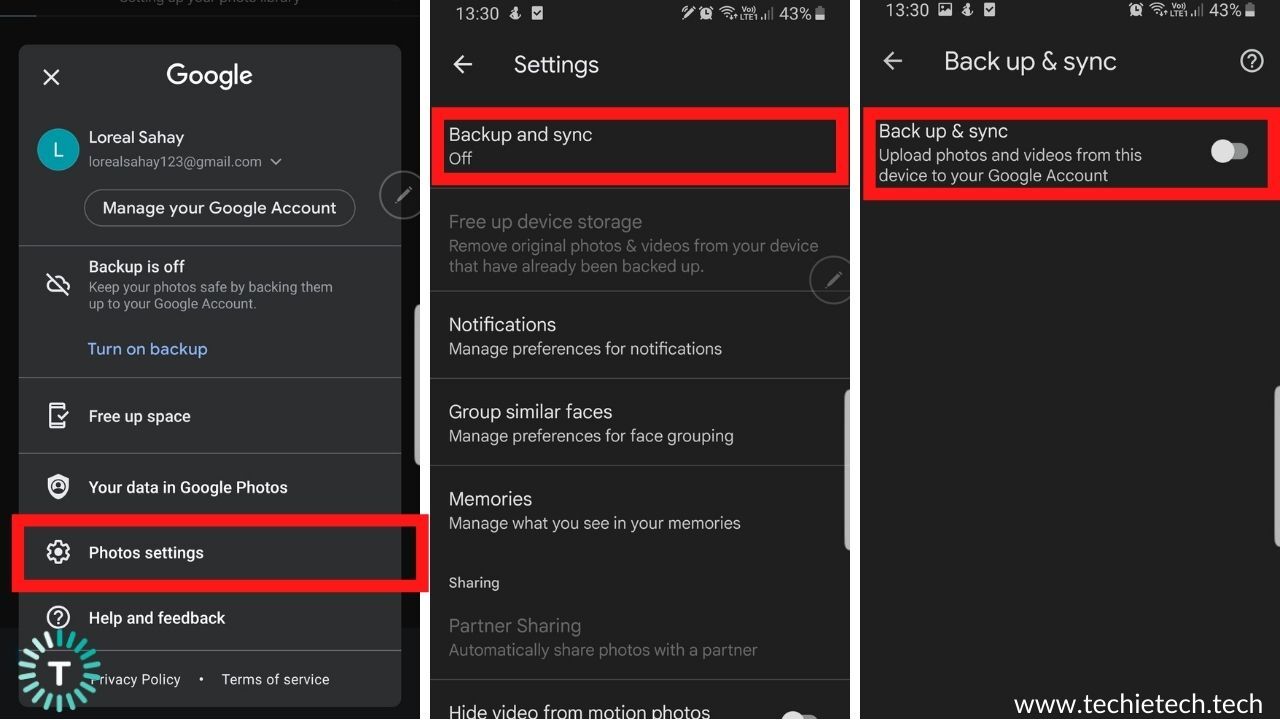 When should you back up your images and videos? Make sure you know when Google Photos backs them up. You also have the option of backing up stuff via mobile data.

Now, return to the previous screen and sync.

Apps can sometimes misbehave and cause a slew of issues; to avoid this, you can always Force Stop a certain app. When you force stop an app, it will end all foreground and background activities related to it (and immediately). It’s recommended to forcibly stop an app only if it’s malfunctioning, such as if it keeps crashing or some of its functions aren’t working. Force-halting an erroneous app has a good chance of resolving the issues that caused it to fail.

If the above techniques haven’t worked, you can Force stop your Google Photos from not loading. To make this possible, follow these steps: 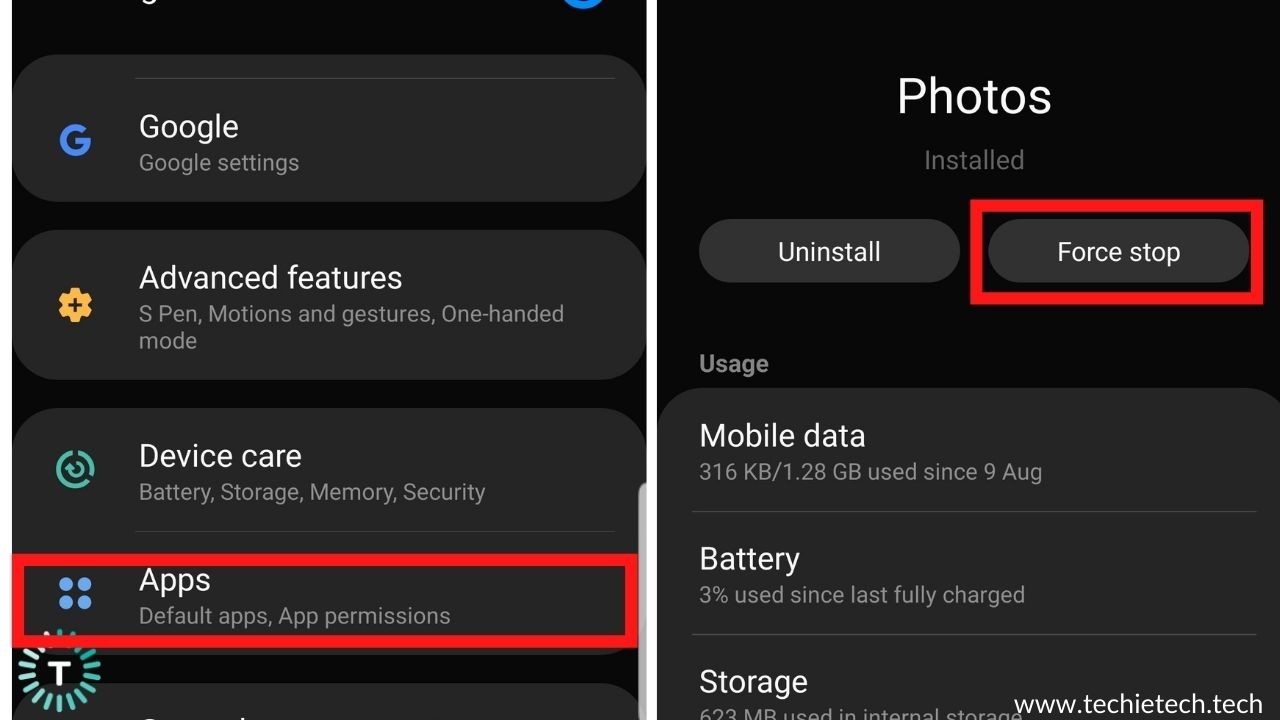 We tend to ignore the apparent things from time to time. When your Google Photos app stops working, you should restart your Android device. Most of the time, rebooting your phone will resolve any remaining glitches or faults that may have caused this situation. There are also many advantages of restarting your phone such as restarting your phone clears faulty data and frees memory from a problematic app without causing any additional problems with the operating system, unlike a “memory manager” software that just kills all of the apps you aren’t using when you press the button. Here’s how to go about it:

Your applications and web browsers save little amounts of data to help you get the most out of them. When cached data is corrupted, it might disrupt connectivity, interfere with games or programs on the device, and slow down download times. Your phone may accumulate a large number of files that you don’t require overtime. To free up some storage space on your smartphone, you can delete the files. Clearing the cache can also assist with difficulties with app behavior. So If something went wrong and Google Photos is not loading, it’s possible that the app’s cache data has become corrupted. You may try removing the Photos app cache to see if it helps. Here’s how it works: 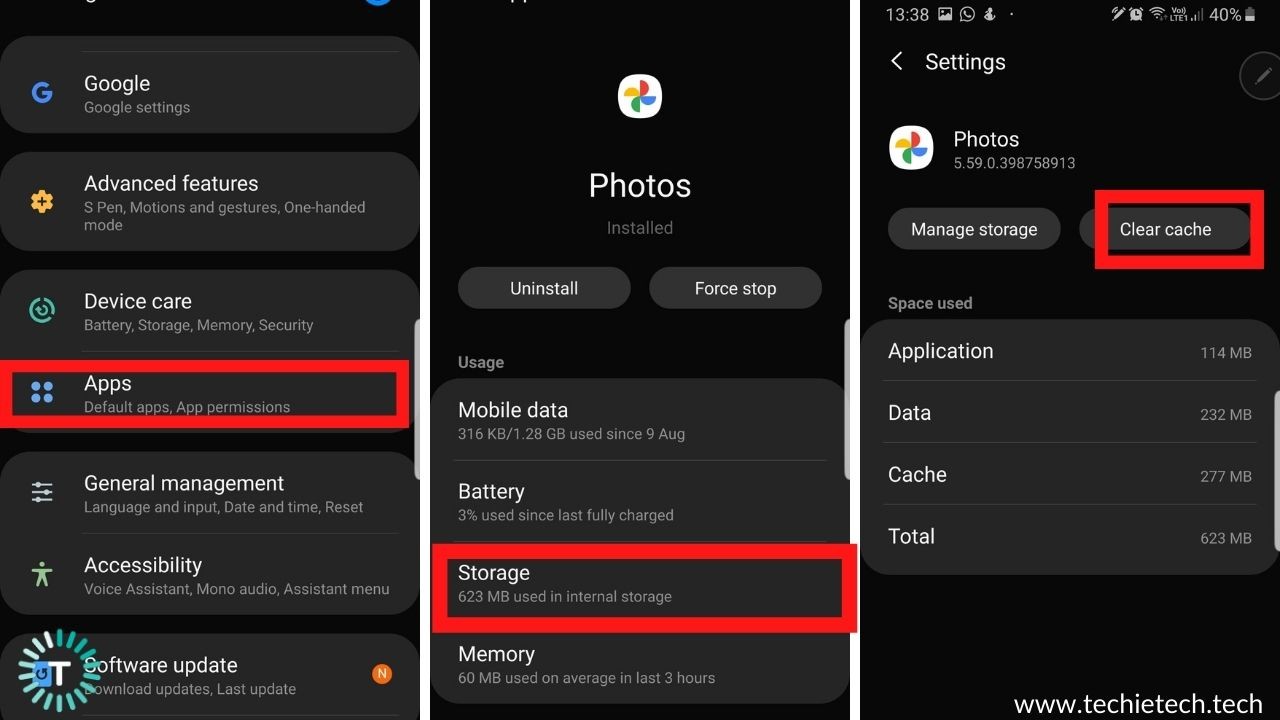 7. Check to see if Google Photos is down

You can also check the status of Google apps on its WorkSpace Status Dashboard.

8. Check the file size or type

Additionally, there are specific file types that can be uploaded or backed up. They are:

If you’re connected to a Wi-Fi network, double-check that it’s up and running. You can run a quick internet speed test to see whether your internet is giving you the right download and upload speeds. If not, then you can either restart the router and rerun the network speed test. If you’re on a mobile network, make sure you have enough data and a fast internet connection.

You should restart your device after confirming a working internet connection to ensure it isn’t a temporary issue.

Also Read: Google Docs not working? Here’s our guide on how to fix it

10. Check if you have enough space

You have three options for storing images and videos in Google Photos. The first option is usually good enough for everyone. It offers the perfect balance of space and quality. The other option is to keep the photos and videos in their original format, despite the fact that you may quickly exceed the 15GB limit, which is essentially ‘free space’, provided by Google itself. The third option is to upload a lot of low-resolution photos and videos. There are three options when it comes to uploading pictures on Google Photos:

Here, photos and videos are kept at a lower resolution with good quality.

Certain photographs and videos may not be able to be compressed and will be saved at their original file size in some cases.

Photos and videos are saved at the same resolution as when they were taken, with no loss in quality.

If you chose the second option, you may have run out of space, which means Google Photos won’t upload anything else until you reorganize your storage and delete some items or buy more storage.

Another reason Google Photos isn’t uploading on your Android is that the app is out of date or the current version is buggy. If that’s the case, Google doesn’t mess around with its apps, and the problem was most likely fixed in the most recent update.

Also Read: Play Store not updating apps? Here are 14 ways to fix it

If you notice that Google Photos isn’t backing up all of your photos and videos, you may need to select what folders need to be backed up. Google Photos only backs up your camera roll by default, so screenshots and photos from other apps aren’t included. If this is the case, you must enable device folder backup separately. Here’s how to do this:

Give the app some time to scan the selected media library so it can be prepared for upload.

Here’s how to fix Google Photos not uploading pictures in the background error:

Clearing the data in the Google Photos app allows the program to start from scratch, removing any prior faults or malfunctions.

Keep in mind, however, that deleting Google Photos data also deletes the app’s settings, accounts, translation language choices, and other data. In essence, you’d have to reconfigure the app and start all over again. Moreover, the media library index will also be cleared, and the program will scan the whole library again. It takes a long time and uses a lot of juice. So, before you do this, we suggest you make sure your Android device is plugged in.

Here’s how to clear app data of Google Photos on Android: 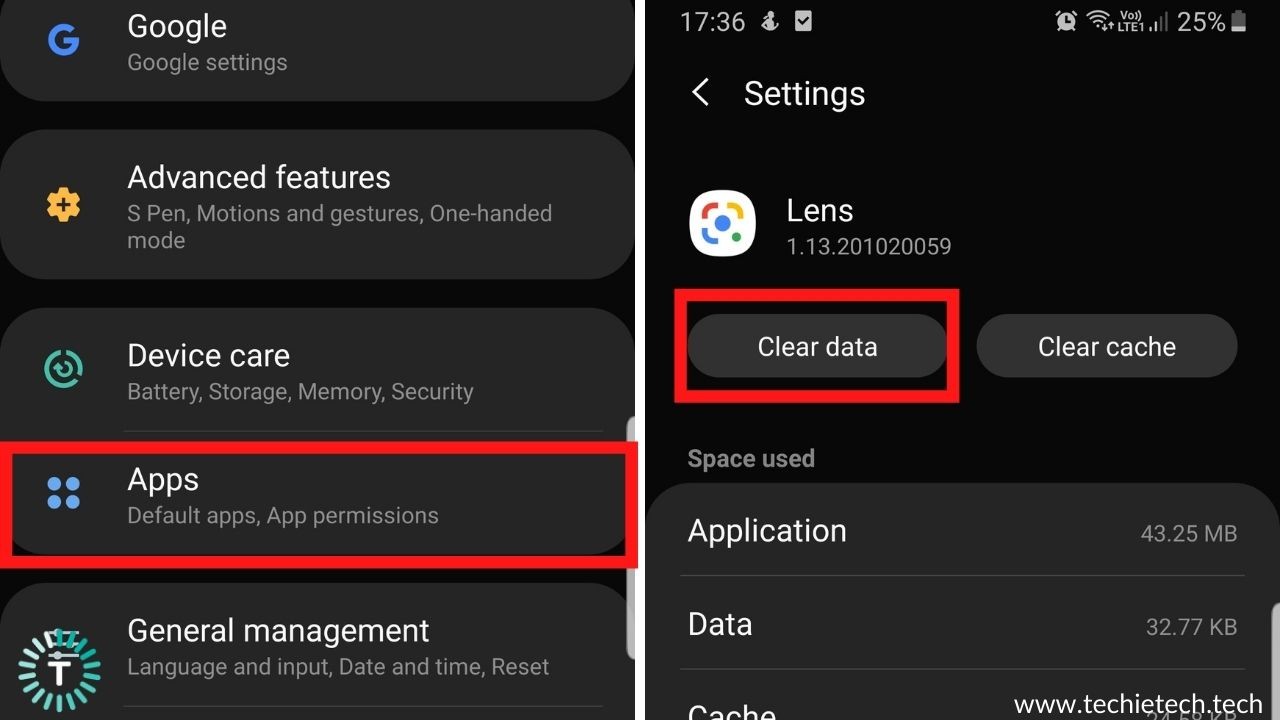 This is a critical troubleshooting step if the Google Photos app is not working or loading. It’s conceivable that the program lacks access to the camera or smartphone hardware on your device. In order for Google Photos to work effectively, make sure it has the needed app permissions for camera and storage on your smartphone. Here’s how to make it right:

If all else fails and Google Photos is still not working, you may need to reinstall the app. The app will be reset, and any bugs that have developed will be fixed. This will not, however, delete any previously backed-up photos or videos, as well as any that are yet to be backed up. As a result, you wouldn’t lose anything. Here’s how you can do this:

Launch Google Photos and sign in to your Google account after reinstalling it on your  Android device. When prompted, remember to turn on Backup & sync.

With the onset of the new Android 12 update, we hope that these issues will cease to exist. If these solutions have worked out for you, please let us know! For more troubleshooting guides, check out our article on Google Lens not working? Here are 15  ways to fix it

Galaxy S20 Not Fast Charging? 7 Ways to Fix It