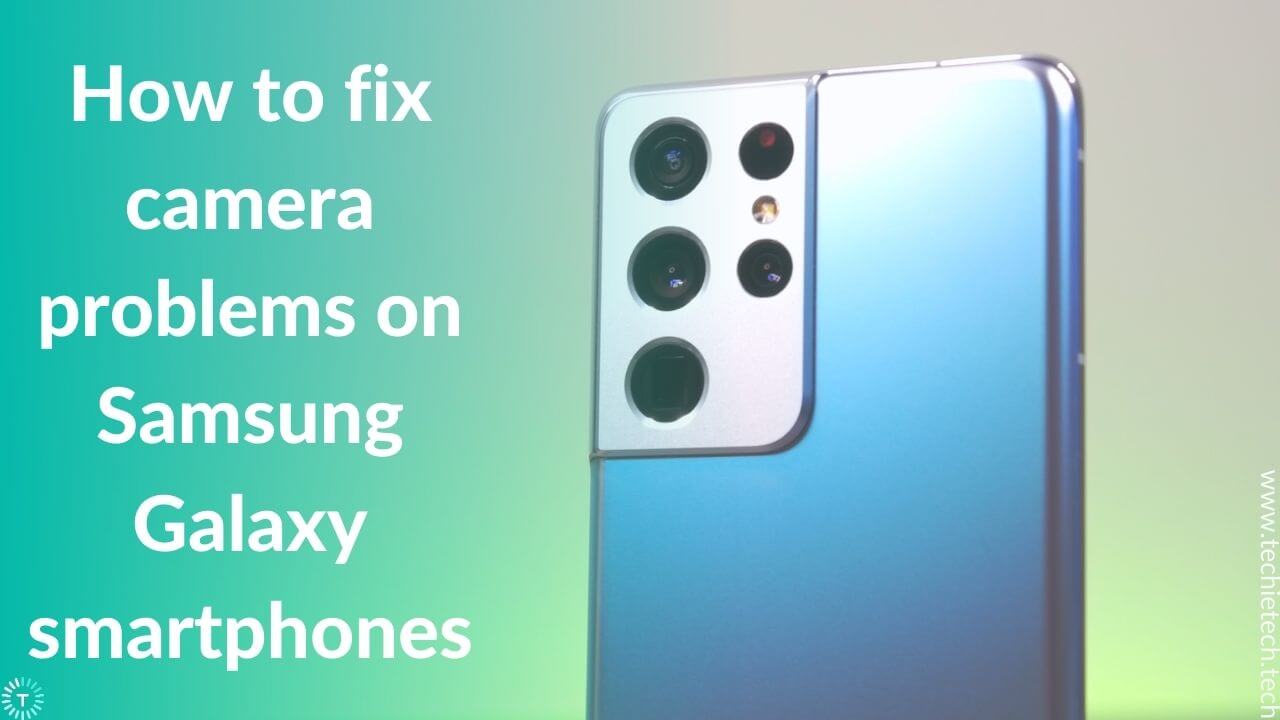 Smartphone cameras have become a vital part of our daily life. From being a mobile photographer companion to capturing important moments for everyone; the Samsung camera app does it all. As you know, since cameras have gotten more technical now they have become prone to some glitch or bugs and the Samsung camera app is no exception. Some users have reported that they have come across various problems where the Samsung smart camera app stops working. Yes, it’s frustrating to experience such problems even with flagship smartphones like Galaxy S21.

For your better understanding, we have listed some commonly faced camera app problems below:

We understand it is so annoying to face such problems on a daily basis. That’s why we decided to toss up this troubleshooting guide on how to fix the camera app problems on Samsung Galaxy smartphones.

How to fix camera app problems on Samsung Galaxy smartphones

The first and the easiest way of fixing camera problems is to restart the camera app. Sometimes, when the camera app has been in use for a long time it may show some error. So, to fix this you just need to close the camera app from the recent app menu and wait for a minute or two before restarting the smart camera app again.

If there’s not any big issue with the Samsung camera app, it should be fixed just by restarting. If not, move onto the following steps to fix the camera app not working problem.

2. Check if the Device Battery is Low

If your Samsung Galaxy smartphone camera is not working and keeps showing a black screen. You probably want to check how much power is available on your phone.

Sometimes Samsung camera apps won’t work when the device battery is critically low. Remember, the camera app will open but you’ll see a popup saying “charge your device.” It is worth mentioning that low battery leads to restriction on the use of flash when you’re clicking photos in the dark place or at night.

3. Ensure other apps are not using the Camera app

Moreover, Google Lens can also be the potential reason why the camera app is not working on your Android phone. To rule out this issue, you can simply uninstall the Google updates from the “App info” and reinstall it again to see if the problem is fixed. Alternatively, try to disable or deny the camera permissions under the Google app from the Settings menu. Just in case Google has been using your device camera, performing this action will fix the issue and your camera app should work fine afterwards. 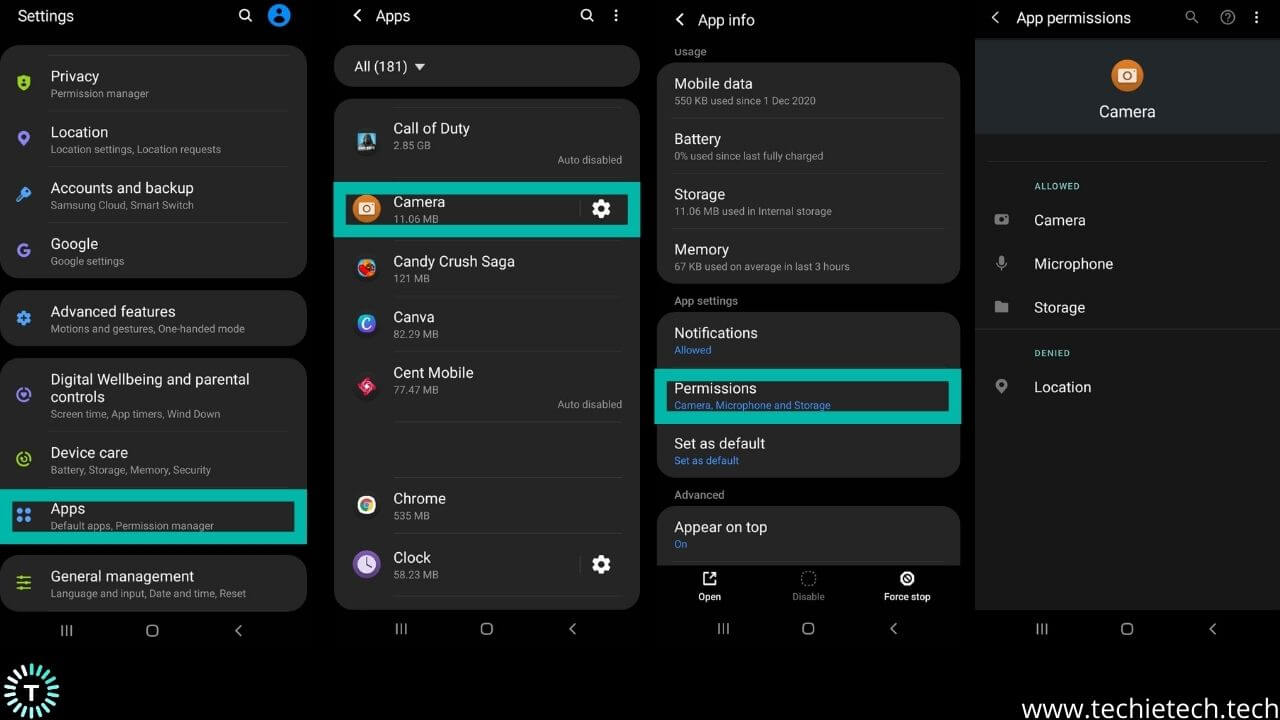 If you get a popup saying “camera not working on Android,” while you open the camera through an app such as Facebook, Instagram, Snapchat, etc.; you need to check app permissions. Sometimes, you may miss hitting the allow button when the app asked you for the camera permission. Moreover, a lot of permissions reset after the smartphone gets a software update. Believe it or not, it is another prominent reason why your Galaxy smartphone’s camera is not working on different apps.

Here’s how to check app permission on Samsung Galaxy smartphones:

Now, check if the camera works fine or not. If the problem is solved, it was an app permission issue. In case the Galaxy S21 camera failed problem persists, try resolving it from the other methods listed below.

Another thing you can try to fix the Samsung rear or front camera failed problem is force stopping the camera app. Yes, it is the best possible solution to fix the camera issues on Galaxy S20 or other flagship phones. Force stopping an app closes it completely and restarts the app  from scratch when you relaunch it. You can also do this to fix the Galaxy S21 Ultra Exynos camera issues.

If that didn’t work, try turning off the Smart Stay feature. If you’re not aware, Smart Stay is a feature incorporated in most Samsung Galaxy devices to keep the screen awake when you’re looking at the phone. Some users have reported that some software glitch is preventing the rear camera from opening, but only when this feature is ON.

As you know, Smart Stay uses a front camera to detect when you’re looking at the screen to keep the screen awake. So, when you try opening the rear camera, there might be some internal conflict caused by software issues preventing the camera app from working smoothly. If all of that doesn’t work, the problem likely has to do with Smart Stay.

Even though it isn’t the permanent solution; you can try it to solve Samsung camera app issues on a temporary basis.

7. Clear Cache of the Camera App

Clearing the cache can be another solution to fix Galaxy A71 camera, not working issues. In understandable words, caches are temporary files of an app that is stored on your device. Although it is a temporary solution as the cache might heap up later as the usage of the camera goes up, but it’s worth trying. So, make sure you do that often; but not daily. In the following steps, we will guide how to clear the camera app cache.

After you’re done, check if you are facing the camera app crashing issue or not. If this didn’t help to fix the problem, make sure to move ahead with the listed methods.

Also read: Instagram not working? Here’s how to fix it 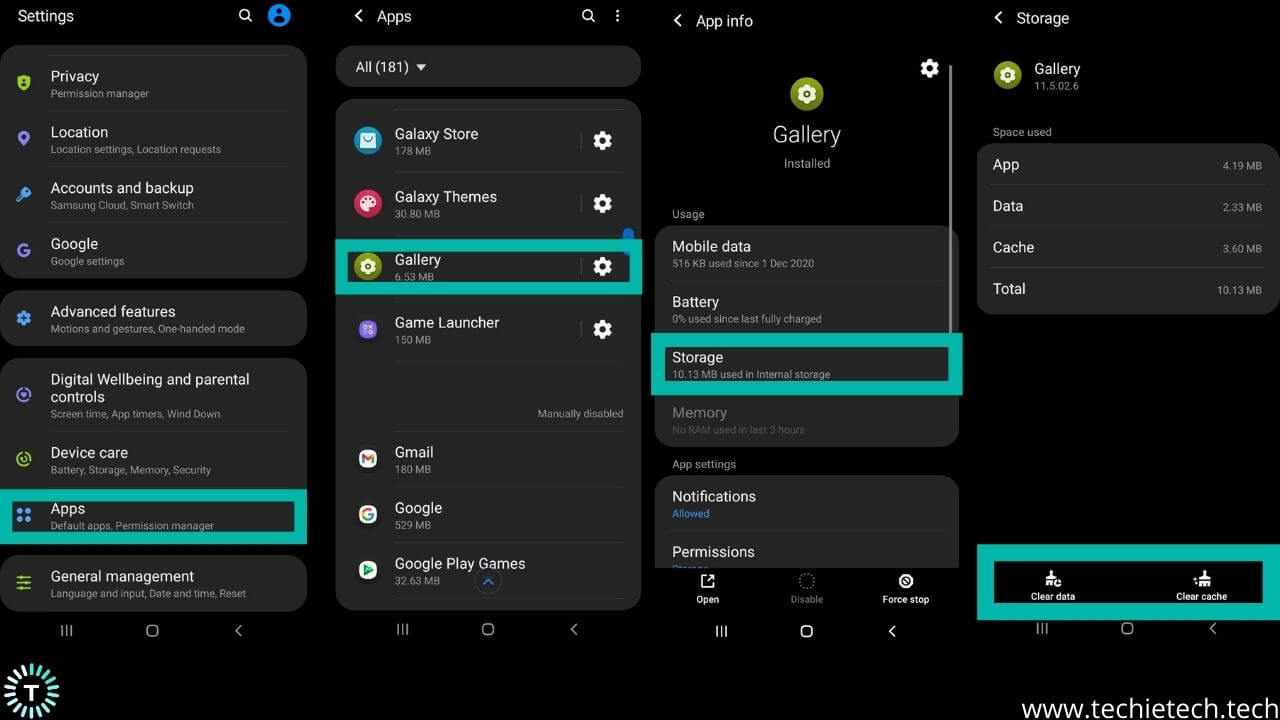 As you know, the Gallery app holds all the images or videos that you’ve captured from your smartphone camera. So, any glitch in the Gallery app can impact the normal working of the Samsung camera app. As both apps are interrelated, it is possible that both apps get affected at the same time leading to a popup saying “Unfortunately camera has stopped.” Thus, you should try clearing the cache and data of the Gallery app.

Here’s how to clear the Gallery app cache and data files in a Samsung Galaxy device:

Once you’re finished doing this, make sure to check whether this solved the camera app issue on Galaxy S21, S21 Plus, and S21 Ultra.

Rebooting your Samsung Galaxy phone is possibly the easiest way listed here to fix the camera app not working on Samsung devices. Restarting a device fixes several technical glitches and bugs that affect the overall performance of the device. So, it is best that you reboot your Samsung Galaxy device to see if the camera not working error is fixed. 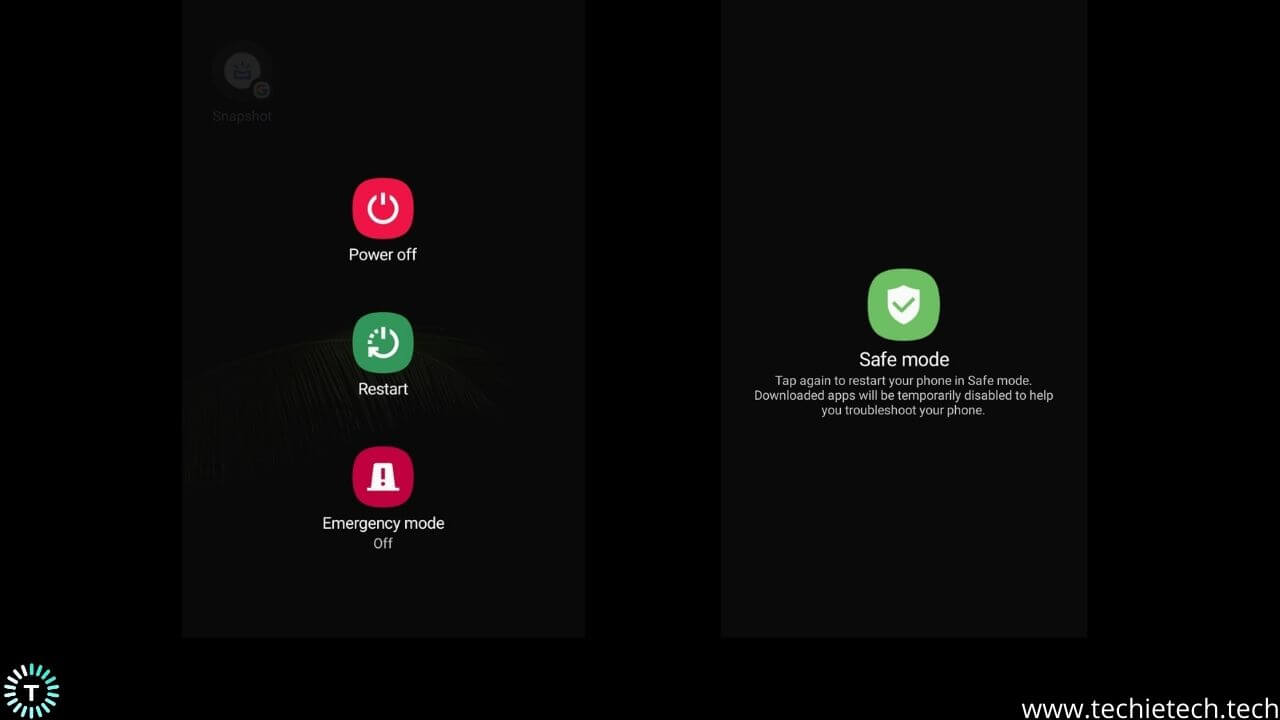 You may not realize this, but third-party apps can be the real culprit for issues when the Samsung Galaxy camera stops working, and starts giving errors, front or back camera not working, or crashing. To rule out this issue, you have to use the camera app in the Safe Mode. In the Safe Mode, you’ll be able to browse the first-party apps, while all the third-party apps are blocked.

Here’s how to put the Samsung Galaxy phone in the Safe Mode:

If you found that the camera is working smoothly in Safe Mode, it’s best to remove the problem caused by third-party apps.

We tend to click pictures and videos without giving the storage much attention. Sometimes, it can be problematic and cause several camera issues on Samsung devices. If the internal memory and SD card both are full; you can expect to see the “camera stopped working” popup when you try to take the next picture/video.

In these situations, we recommend freeing up space from the device or the SD card. Make sure you delete unwanted files and backup those with somewhat importance to Google Photos. Once there’s enough space, your camera should work perfectly fine. If it doesn’t there’s something weird going on in your device that should be fixed on an immediate basis.

If the camera app on Samsung smartphones won’t work smoothly, then try wiping the cache partition of your device. A cache is a temporary file that is stored on your smartphone, while a cache partition is a space where cache files are stored. Let’s not forget, sometimes cache files can get corrupted resulting in camera errors on Samsung Galaxy and other Android phones.

So, to solve the issue it is best to wipe the cache partition from the Android recovery mode. Remember, this will not delete your data including photos, videos, etc.

Here’s how to wipe cache partition on Samsung Galaxy smartphones:

After you’re done, highlight the “Reboot system now” option and reboot the device by pressing the power button again. Now that your phone is ON, you can check whether the camera app is functioning well. 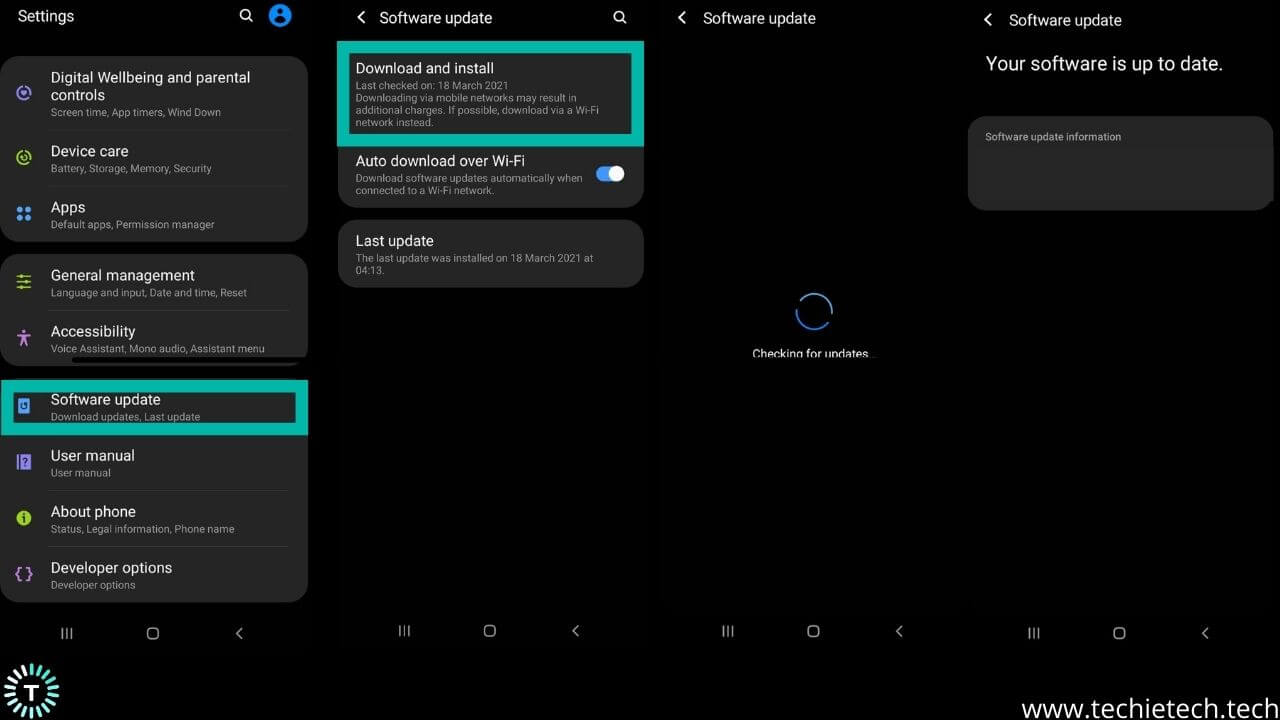 New updates are a cure to the pre-existing bugs and glitches that harm the normal functioning of the camera app. So, it is best to wait until the next update rolls out to fix problems where the Samsung camera stops working or keeps crashing with a popup that says the camera failed.

If you don’t know how to update your Samsung Galaxy phone, follow the steps given below:

If this helps to fix the Samsung camera app crashing issue, then you should understand there was some bug in the previous software version that was causing the problem.

Here’s how to factory reset a Samsung Galaxy device:

This is probably the last thing you can do from your end. If the camera issue on Samsung galaxy phones persists;  make sure you get it examined by trained professionals at the Samsung service center. If they can’t fix it, who knows you may get a brand new Samsung Galaxy phone.

That’s all on our troubleshooting guide to fix the camera app not working problem on Samsung Galaxy smartphones. Also, make sure to read our guide on fixing the phone app not working on Android.

iMessage not working on iPhone? Here’s our guide on how to fix it

Annoyed with your Android TV not Connecting to Wi-Fi? Here are 10 easy fix