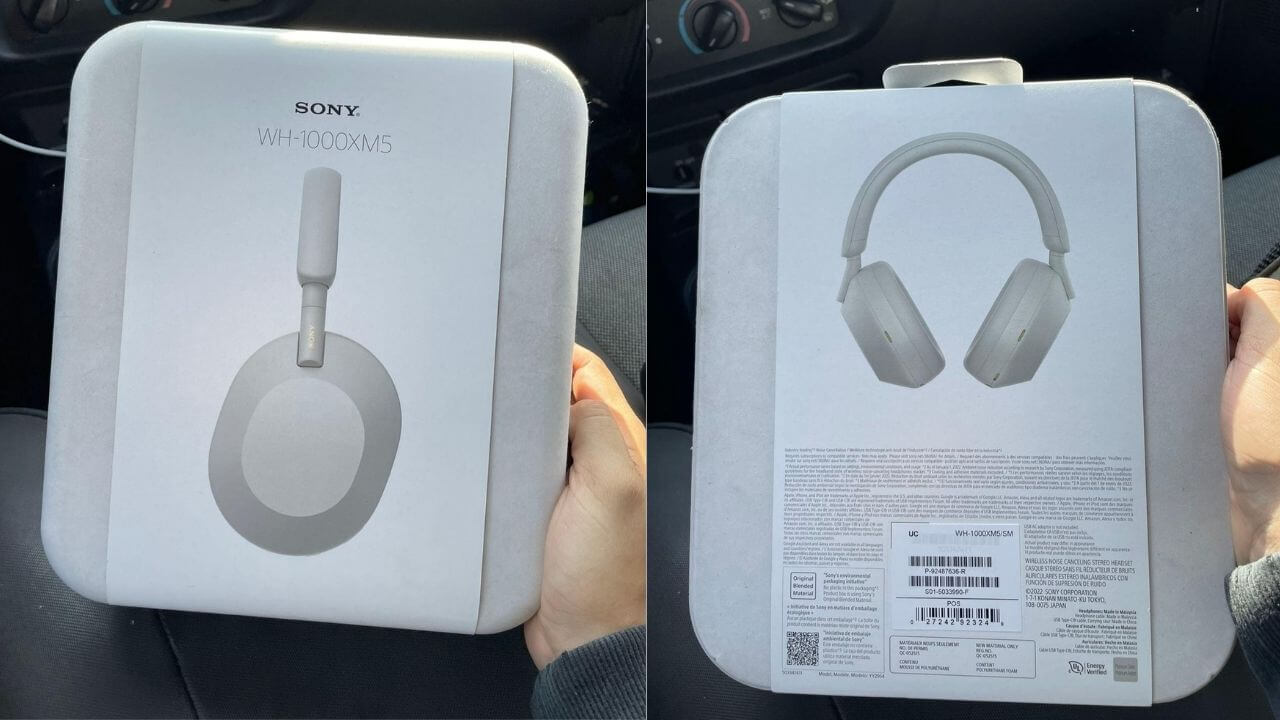 Recently, the internet is buzzed with the leaked images of the retail packaging of Sony WH-1000XM5, the successor to the supremely popular Active Noise Cancelling headphones, the Sony WH-1000XM4. The MX4 was launched in August of 2020. The images confirmed the upgraded design and also suggest that we would not have to wait too long to see the official launch. The photos of the new Sony WH-1000XM5 were originally shared on the Sony Subreddit that showed the outer packaging of the headphones, showcasing the design and Silver colour.

The design is completely refreshed, with a more uniform headband, symmetric & chiselled earcups being the most noticeable changes. This brings a lot of elegance, sophistication, and freshness to Sony’s latest version of the best ANC headphones. Also, the Sony brand logo is now moved to the side of the hinge. Moving further, just like many of the Bose headphones, the headband is thinner at the ends and there’s a single point of contact between the headband and earcup.

Sony WH-1000XM5: The confusion around the battery life

Besides the refreshed design, the retail packaging has got a glimpse of the Sony WH-1000XM5 specifications. It says 360 Reality Audio, Hi-Res Audio, 30 hr battery life, and Industry-leading Noise Cancellation. A few weeks back, an anonymous retail source suggested that with ANC enabled, Sony WH-1000XM5 will have a battery life of up to 40 hours, which is 10 hours more than XM4’s. However, the XM5’s box packaging says 30 hours of battery life.

If we analyse these, it could be possible that the 30 hours relates when Noise Cancellation & Sony’s Hi-Res LDAC audio coding technology is enabled, and the Sony XM5 offers a total battery life of 40 hours when LDAC is disabled. Now, that’s just a possible explanation and things can go differently as well. It can also be possible that Sony has decided to reduce the battery capacity to reduce overall weight. Again, we just can’t arrive at the final conclusion until the product launches.

The Walkman Blog has suggested that the price of the Sony WH-1000XM5 may go up due to global supply issues and increased costs of materials. For reference, Sony WH-1000XM4 retails at $349. Now, if the rumours are true, Sony WH-1000XM5 would make an entry into the most high-end headphones and will have direct competition with Bose’s premium range of headphones and even the Apple AirPods Max. Talking about the official release date, it’s worth mentioning that FCC short-term confidentiality ends in early August, but the leaked images suggest that we could see XM5 earlier.

We absolutely love the Sony WH-1000XM4 and have already recommended it as the best accessory for many iPhones, Android smartphones, Galaxy Tabs, iPads, Mac Studio, and other devices. Now, we just can’t wait to get our hands on the successor of Sony’s ultra-popular ANC headphones. We’ll be sharing updates as soon as the Sony WH-1000XM4 hits the markets officially. Sony has also teased the XM5 on their official website as well.

Did you like the new design of the Sony WH-1000XM5? Do share your views in the comments section below.

Don’t miss our roundup on the best headphones under $50.