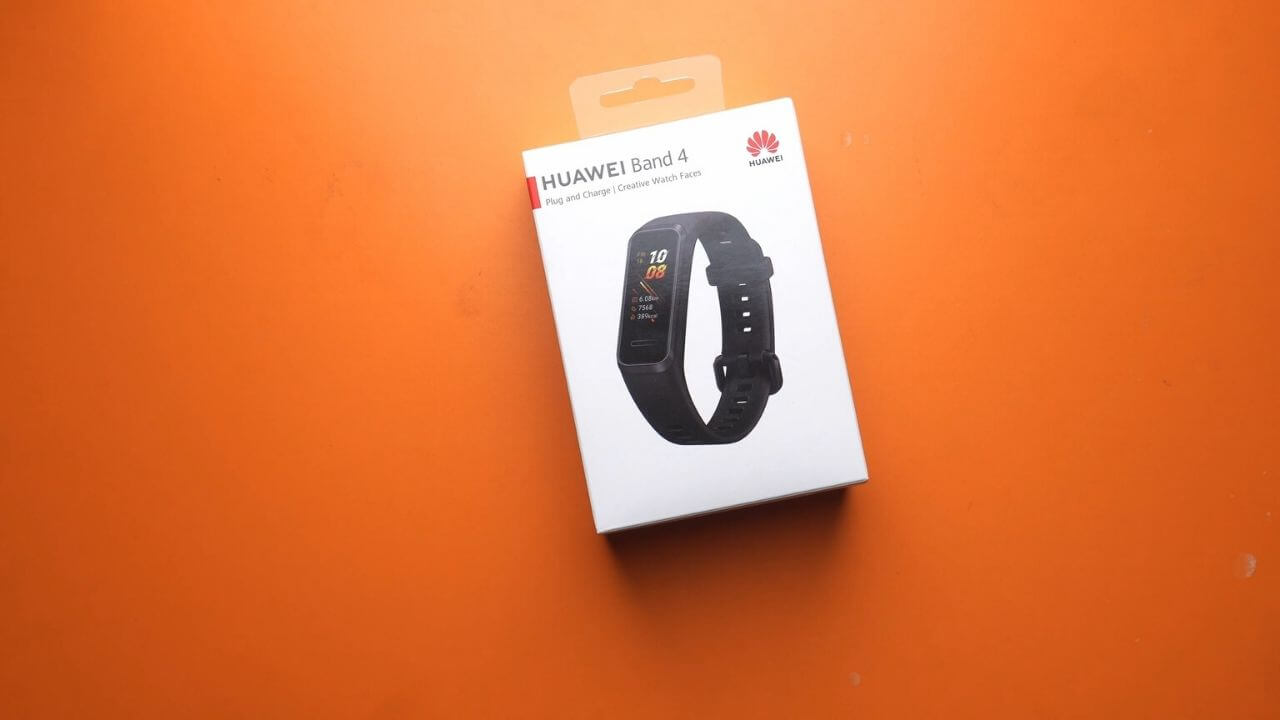 So, Huawei’s fifth iteration of their fitness band series went on sale in February. And after thoroughly testing the budget fitness band, here’s my review of it. 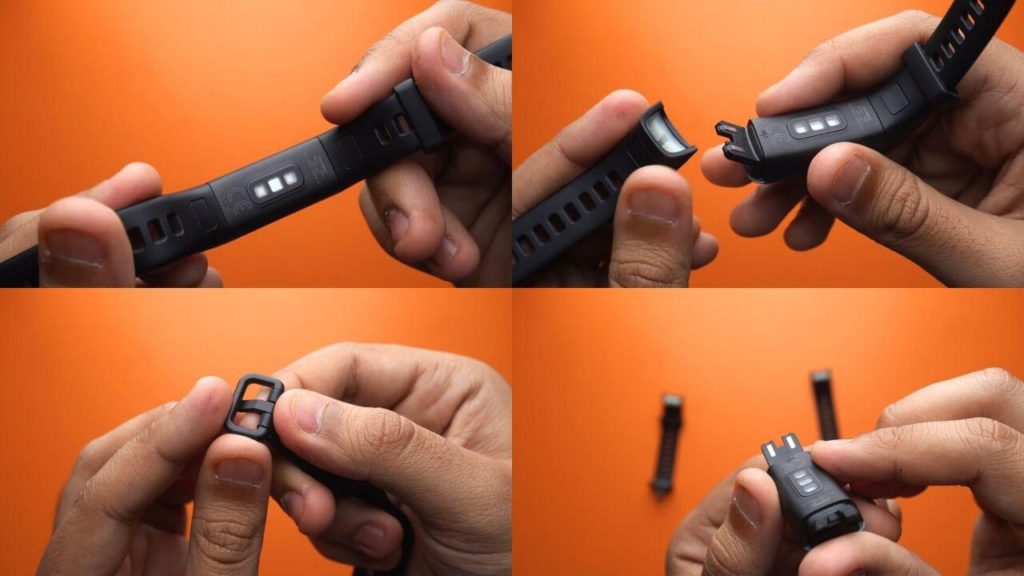 At first glance, you’ll notice the 0.96-inch color screen. It features a resolution of 80×160 pixels.

It comes in both AMOLED and TFT screens variants. That is also subject to regions. For example, I reviewed the Indian unit and it came with a TFT screen. But the Chinese and international units have AMOLED displays.

Under the screen, there’s a small horizontal bar that acts as a touch-capacitive button. It has a reflective outline to it. And no, it does not light up. I like to call it the home button (similar to that on older iPhones) because it’s only function is to wake up the screen and get you to the home screen from any menu/settings.

Huawei Band 4 weighs only 24gm with both the straps. And frankly, most of the time during the review I didn’t even feel it on my wrist.  The silicon rubber straps are of high quality and feel really nice on the hand. They don’t cause any rashes or itching if worn for long hours. This was a very common issue for people with sensitive skin. I faced some itching and rashes with the stock straps that came with the earlier generations of MiBands. Thankfully, that’s not the case with Huawei Band 4 straps.

Moreover, there’s a total of 30 adjustment holes in the straps so if you have big or small wrists, you don’t have to worry about wearing the band too tight or too loose. The buckle and the buckle tongue of the Huawei Band 4 feels like they’re made out of high-quality plastic and does not break off easily. Yes, I stress tested that and it easily survived the regular push and pulls without any signs of breakage. Moreover, the buttons present on the back of both the straps are tactile and makes the whole process of removing and attaching the bands more easy. 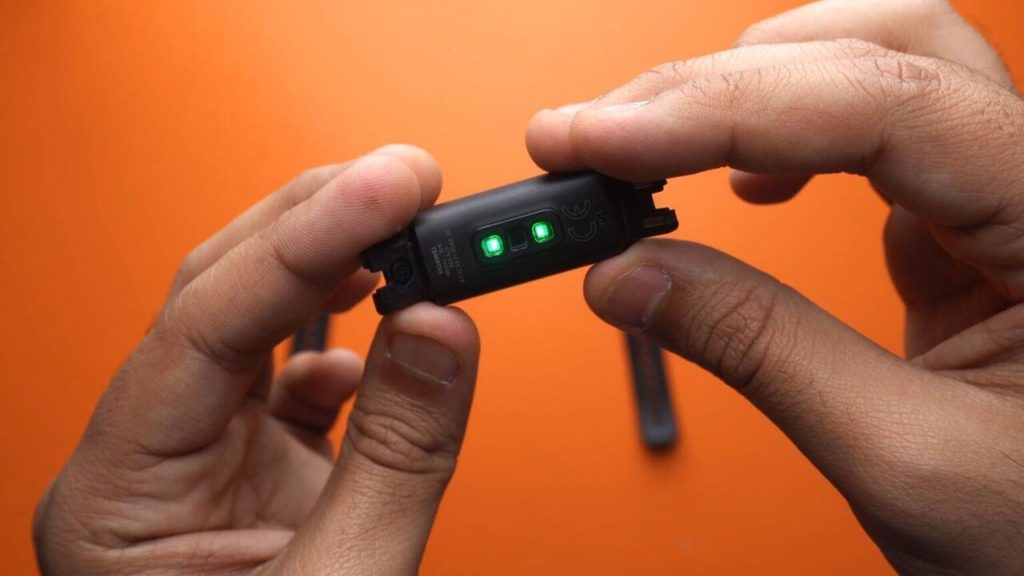 On the bottom of the Huawei Band 4, there’s a USB A male connector which can be used to charge the budget fitness band. The connector feels sturdy and looks durable.  Coming to the charging part, I think what Huawei did here with this band is something that other fitness band manufacturers should follow. Not having to carry a separate cable or adapter for your fitness band was long needed. With the Huawei Band 4 I don’t have to worry about running out of battery as I can always plug it in any Type-A USB port.

Moreover, the band is water-resistant up to 50m so one need not worry about taking it out in rain or showering while wearing it. Although, nothing is said about the band being swimming proof so I won’t really advise you to do that.

What’s in the box

The Huawei Band 4 comes in a small and lightweight box that looks very similar to it’s counterpart’s box, the Honor Band 5.

You get the following:

As I mentioned before, you don’t get any charger because the band has a type-A USB connector built right into the band. 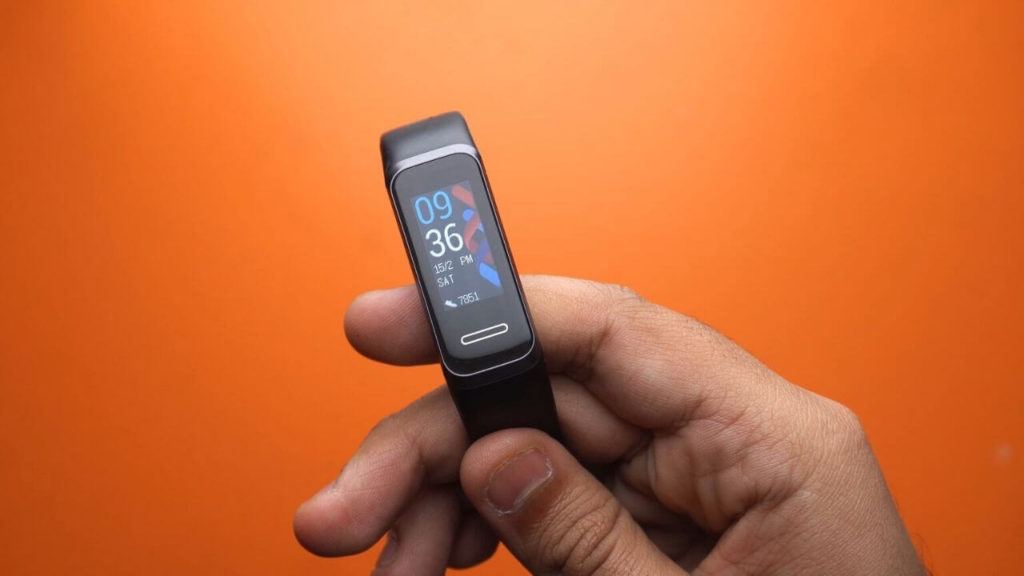 Performance is where things get interesting. The band features the Apollo3 microprocessor which is famous for it’s low power consumption. We’ll be covering the different functions of the Huawei Band 4 like activity performance, sleep tracking, and music control.

Starting off with the band’s activity section it provides you the basic details like the number of steps walked, distance traveled, calories burnt, and the activity time, along with a standing points feature. The standing points basically remind you to move when you’ve been inactive during work hours between 7 AM and 7 PM. You can easily turn off the activity reminders in the Huawei Health App settings.

Moving on to the exercise option, the Huawei fitness band 4 has nine different activity modes. You can activate these modes right from the band as well as from the Huawei Health app. Since the band has no GPS. So, you’ll have to carry your phone with you whenever you’re going for a run outside. Honestly, I’m fine with that as no other band in this budget segment has GPS so you won’t be missing out on anything.

As for the activities , the Huawei Band 4 offers the following activities:

The band tracks your heart rate, calories burnt, distance and a bunch of other metrics. You can browse these metrics in detail in the band’s app. We’ll take a look at how to use the Huawei Health App later in this review. 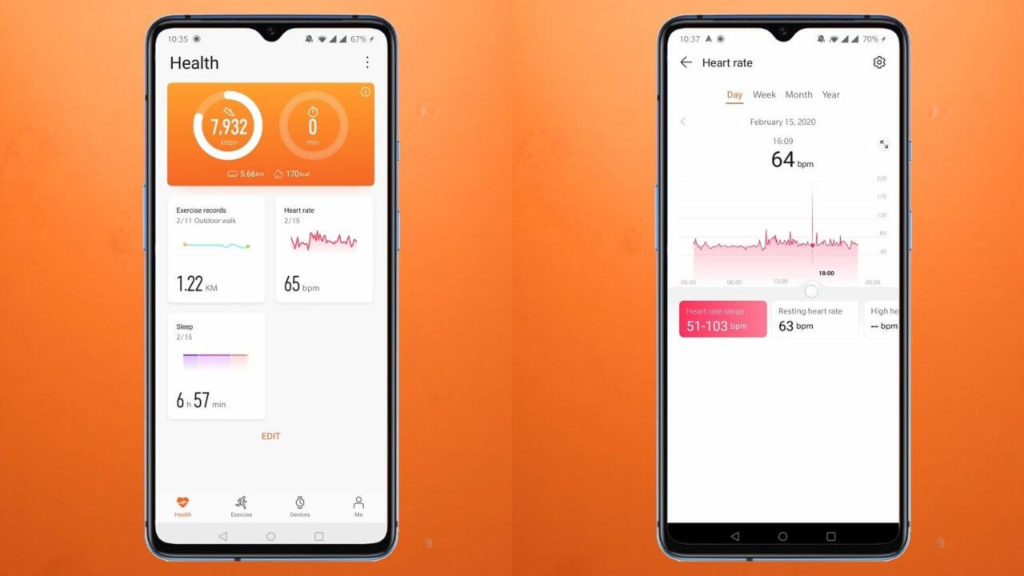 Similarly, you can see your heartbeat and sleep tracking data in detail within the app. These features work only when you’ve enabled them in the app settings. Both sleep tracking and heartbeat tracking features drastically affect the battery life of the Huawei Band 4.

Although, I found the sleep tracking feature to be fairly accurate and useful. And initially, it did help me improve my sleeping schedule. I really liked how Huawei divided the sleeping types. The band also tracks if you sleep during the day. 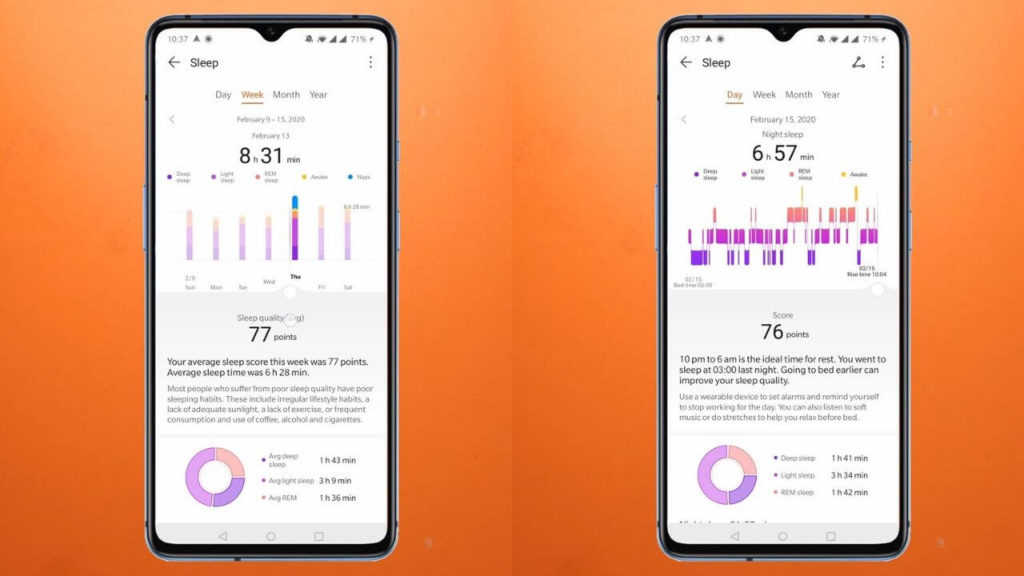 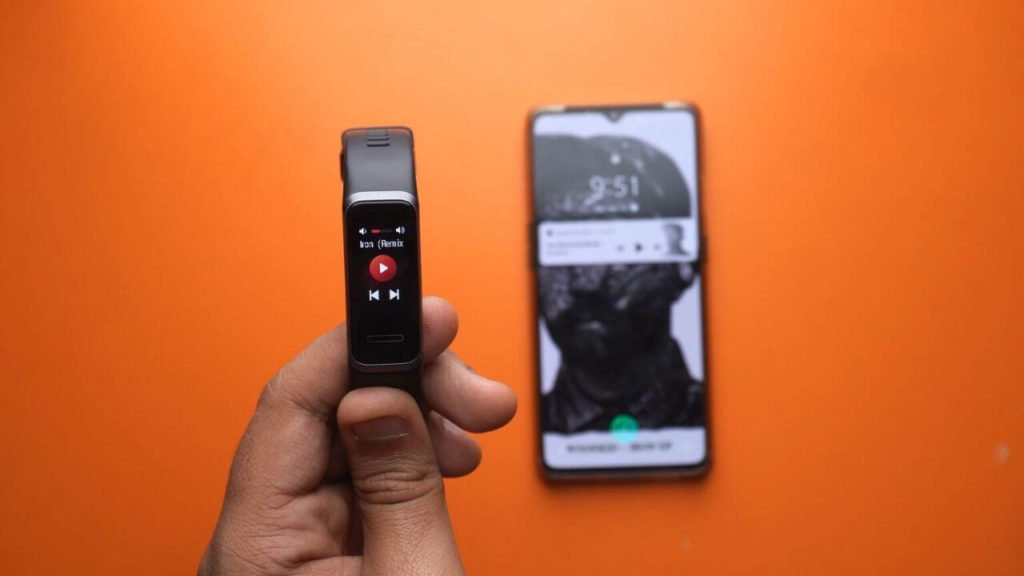 Moving on to the next menu option of music control. I really loved the feature as I don’t have to pick up my phone whenever I want to change songs. The ability to adjust the volume right from the band itself is the real icing on the cake.

The Huawei Band 4 or the second cousin of Honor Band 5 as I like to call it, offers the commonly found fitness band features like stopwatch, timers, alarms, find my phone, etc. There’s nothing new about those features so I’ll just skip them.

The unit available in the Indian region features a 0.96 TFT screen and not an AMOLED screen. I’d have loved the AMOLED screen though. The display on the Huawei Band 4 is bright enough to be fairly visible in broad daylight. There are 5 different brightness levels available in the settings option.

There’s no auto-brightness option but the band has the setting to lower the brightness during the night so it doesn’t interfere if you’re sleeping while wearing it. Even though the display has a very low resolution, the colors are decent and gradient icons look fine. 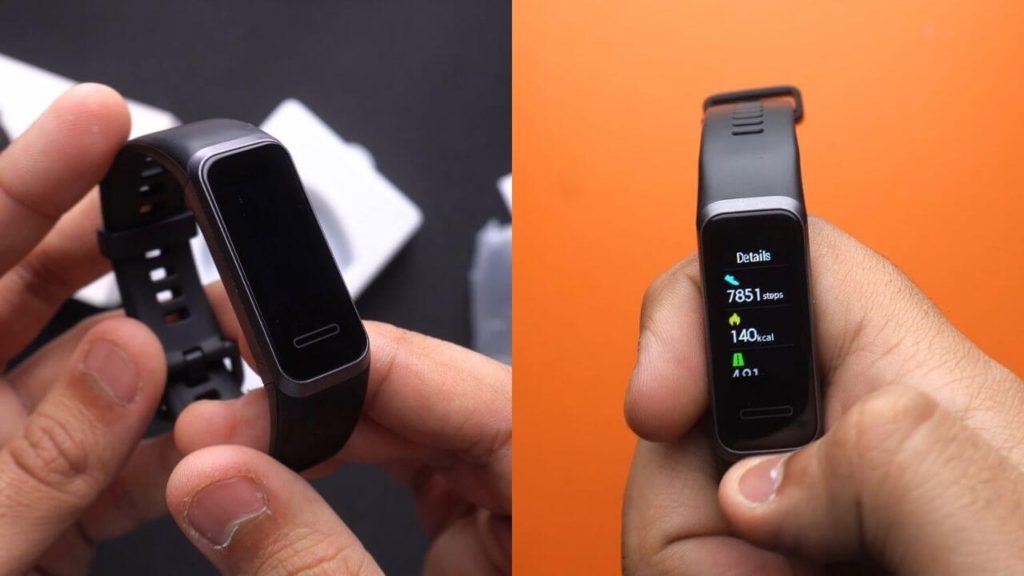 As for the build quality of the display, it can get scratched easily. So, a screen protector is highly recommended if you’re planning to use it for long term.

Moving to the Watchfaces, this is a deal-breaker for some people as the Huawei Watch Face Store is not available /supported in some countries like India for example. So, you’re stuck with the 3 stock watch faces. But there are some turnarounds to this caveat. Stay tuned for our tutorial on how to download Watch Faces to Huawei/Honor Bands through the Huawei Health App.

The Huawei band 4 features a minimalistic UI and only 7 main menu options along with the home screen. The menu is divided into the following settings:

Each of these menu items have their own settings & options. 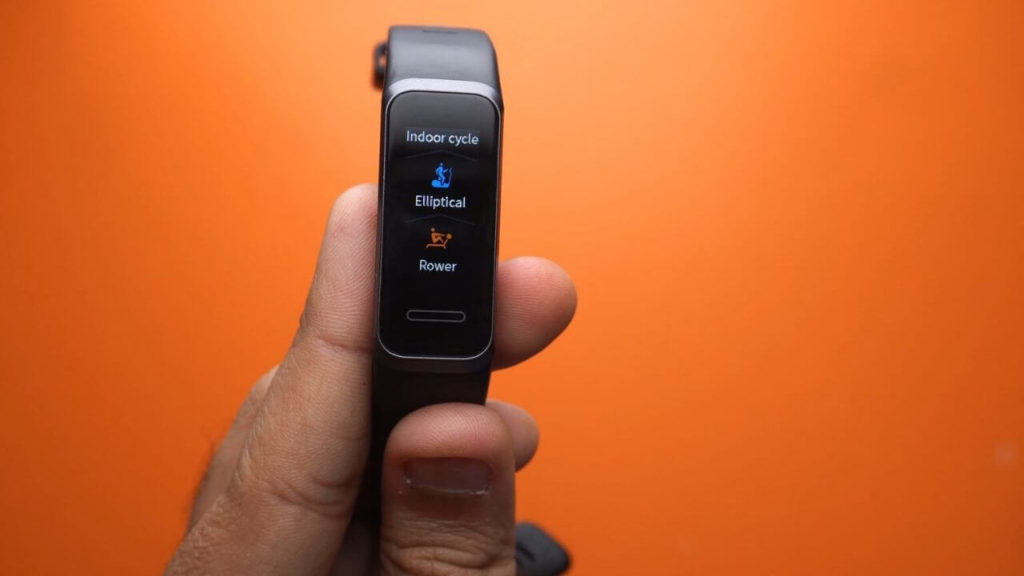 Operating through the Huawei Band 4’s UI is pretty simple as it only uses swipe up and swipe down gestures along with the swipe right to go back gesture.

Huawei claims a battery life of 7 days with all the features turned on and 9 days of battery life with continuous heart rate and sleep monitoring turned off. This includes the regular notification checking along with fitness activities. Here’s what Huawei had mentioned on the product page in regards to the battery life of the fitness band:

To be honest, those numbers are very accurate in real life. The 91mAh battery as mentioned on their official website takes 90 minutes to charge under normal ambient temperatures (25degrees Celsius ). It took me 70 minutes to charge the band from 0 to 100%. Well, I guess that depends on the charger as well.

As for the notifications,  my phone rings north of 300 times daily. The vibrations caused by the notifications are strong and loud enough to make your wrist move. I keep the band on full brightness all the time with heart rate and sleep tracking turned on. And I’m quite satisfied with the battery life of the Huawei Band 4.

The Huawei Band 4 pairs with Huawei’s official Health App. The UI of the app is quite minimalistic. The app not only supports Huawei wearables but also the Honor’s line of wearables as well.

With the Huawei health app you can browse your workouts in more detail. Not only this, you can also access your older workout sessions to see how you’ve improved over time. So, that’s a good perk if you’re a fitness enthusiasts. The app also has a customizable dashboard which shows you all your activity and sleeping details in brief with interactive graphs. Each parameter of the graph gives you recommendations along with detailed information as to why these numbers are either right or wrong.

One thing I really loved about the Huawei Health app was the ability to connect and sync wearables data with other system native apps like Google Fit in Android and Health app in iPhones.

You can refer to the Huawei Band 4 review video here:

The app is divided into 4 tabs: Health, Exercise, Devices and Me.

The Health tab shows the dashboard with a big tile-like design that can be customized according to your preferences as mentioned before.

The exercise tab lets you start new workouts and access the old ones with detailed insights. There’s also a dedicated section for training that will give you a plan for marathons and guide you for the same. By providing scheduled runs and workout plans. That’s kind of impressive if you’re into running. Also, that will save you some money over getting a personal instructor or trainer.

The next tab is the devices tab where you can add or remove Huawei and Honor devices. This is where you can access the settings and check the status of the fitness bands. 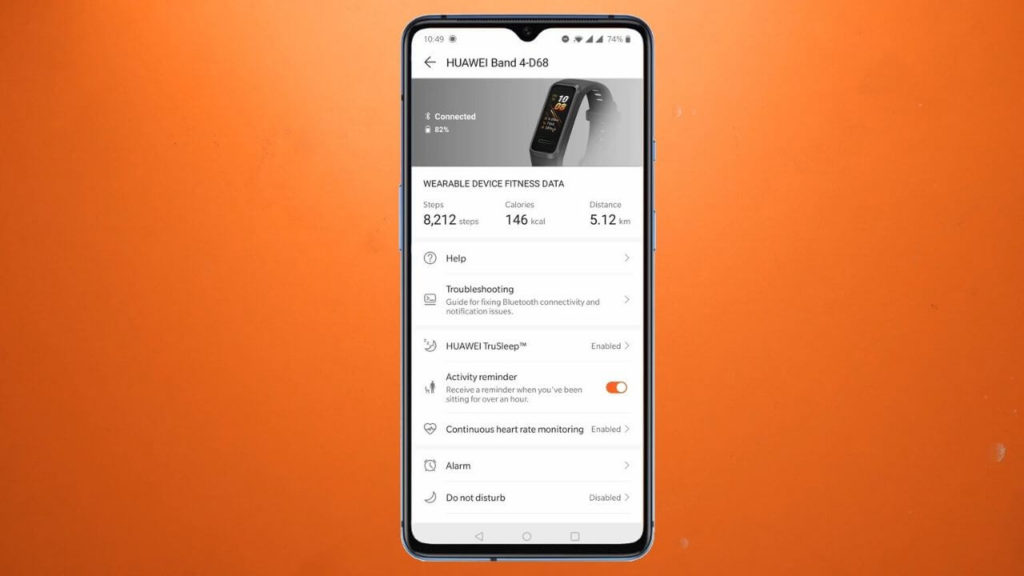 The last tab is the Me tab where you can update your profiles with personal information along with some general settings like heart rate zones etc.

The main competitor of Huawei Band 4 is the Honor Band 5 which is also owned by Huawei. In fact, both these fitness brands retail for the same price online. The Honor Band 5 has all the same features, except for an additional feature called the SpO2 Monitor which tracks oxygen saturation levels in the bloodstream. But it does not have the USB A connector on it so you’ll need a charging cable when you’re traveling.

Check Price on Amazon (US)

MiBands are famous for reliability and affordability. Also, with the other 3 iterations of their fitness bands, they have built a really good reputation among budget fitness band users. In terms of features, the Miband offers more similar features  but the app has more customizability options in terms of device usage. Also, the 20 day battery life is a big addition.

Check Price on Amazon (US)

I’d like to add that the sub $50 fitness band market has really grown in the last few years, especially with Chinese brands coming up with new iterations each year. As for the pricing, the cousin of Honor Band 5, the Huawei Band 4 costs ₹1,999 on Flipkart and $35 USD on US-based eCommerce platforms. Considering all the features and battery life the Huawei Band 4 offers, it’s a fair price.

The verdict of my review of the Huawei Band 4 is that it’s a decent fitness band with a good number of features. But the most confusing thing is the fact that another band by the same company exists which retails for the same price and that too with the same features. The only difference is the basic UI features, the extra oxygen tracking feature on the Honor Band 5. But I’d prefer the in-built USB charger any day over the oxygen level tracking on the Honor Band 5.