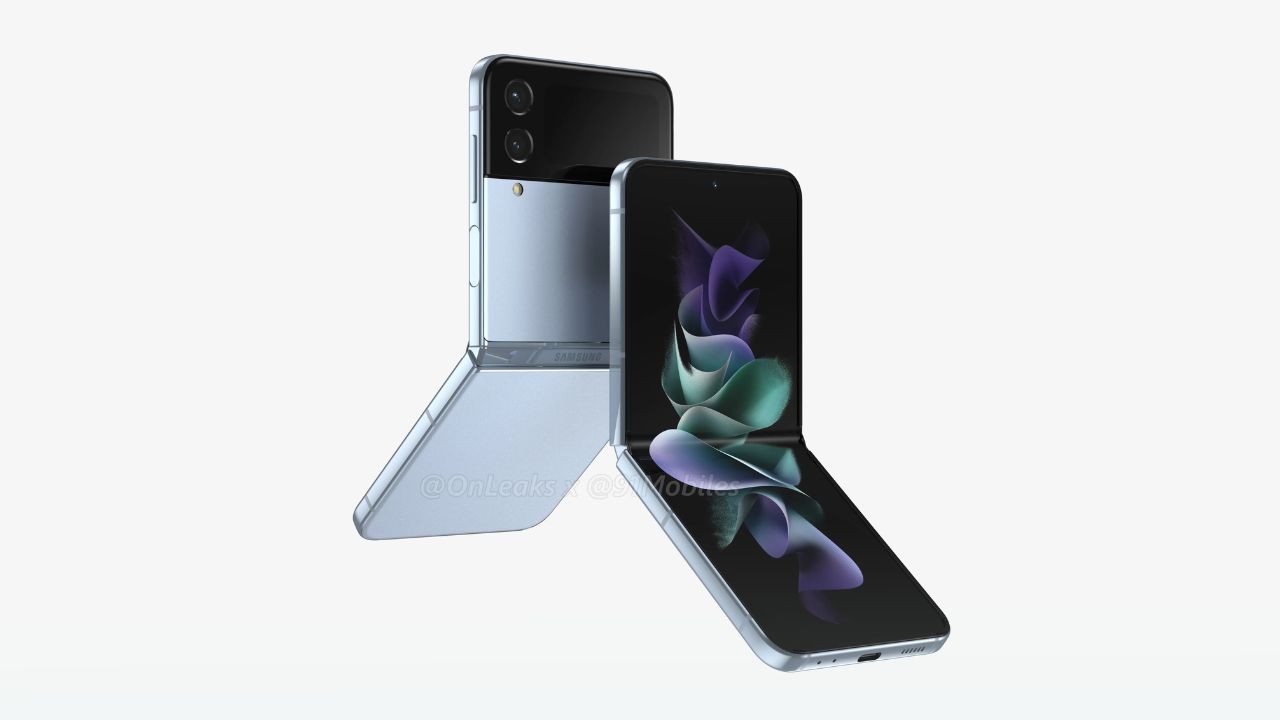 The Samsung Galaxy Flip 4 will not deviate much from its predecessor in terms of design.  We expect the same dual-tone clamshell fold combining glass and metal in a compact sandwich design with an improved hinge design. The leaked renders indicate that the Flip 4 will be slightly thicker at 7.2mm than 6.9mm in Galaxy Z Flip 3.

The decision for a dual-tone design which Samsung opted for Galaxy Flip 3 was a hit so it is highly likely that the dual-tone design will be retained this year. However, multiple sources have confirmed an improvement to the IPX8 rating of the Flip 4. So, this year we could see a dustproof Galaxy Z Flip 4. Other reports suggest Samsung will stick with a side-mounted physical fingerprint sensor rather than going for an under-display sensor.

We are expecting Galaxy Z Flip 4 to launch in 4 colors:

There have been rumors about a slightly larger outer AMOLED display in the Samsung Galaxy Z Flip 4. It could be at least 0.2 inches bigger than the Galaxy Z Flip 3’s outer display (2.1” on Flip 4 vs 1.9” on Flip 3).

The main or inner display of the Samsung Galaxy Z Flip 3 came with a Full HD+ display resolution so we can see that the Flip 4 will sport a 6.7” inch FHD+ display. Furthermore, there have been speculations about an under-display camera as well as a punch-hole camera but nothing has been confirmed as of now.

The most substantial change we can see in Samsung Galaxy Z Flip 4 is the update in the chipset. Rumors suggest that Qualcomm Snapdragon 888 in Z Flip 3 may get upgraded to a Snapdragon 8 Gen 1 or 8+ Gen 1+ chipset. Based on software leaks the Samsung Flip 4 will run Android 12 OneUI 4.5 right out of the box. Since the Flip 3 came in 128GB and 256GB storage options, therefore, we can confirm the Flip 4 will offer the same storage variants.

There will be some much-needed upgrades in the battery department. The Samsung Galaxy Z Flip 4 will provide a 3,700 mAh battery with 25W wired and 10W wireless charging support. This is a modest 400 mAh upgrade from Galaxy Flip 3 which had a 3300mAh battery and 15W wired charging support.

Again, we have no official hints or leaks from Samsung but based on the success of previous models, we can predict that the Flip 4 will most likely start at $999.

Just like in the past, the Galaxy Z Flip 4 launch will take place with the Galaxy Fold 4, the 4th generation of Samsung’s flagship foldable smartphone. Galaxy Z Fold 4 and Samsung Galaxy Flip 4 will be launched together in August 2022 at the Unpacked event.

It is still early to say anything with full confirmation and some of the features might change as the device nears launch. We’ll give publish new information regarding further updates.

What are your expectations from Galaxy Z Flip 4? Do let us know in the comments section below.