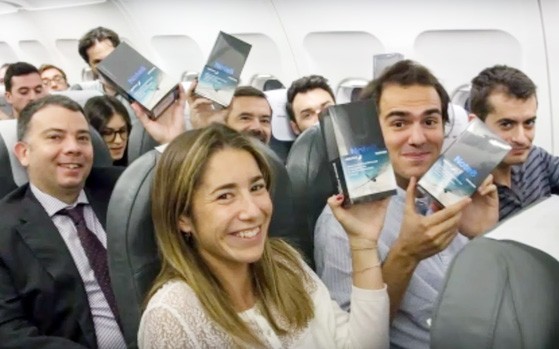 Last year’s Note 7 fiasco was a nightmare for Samsung. The reliable and trustworthy reputation of the Galaxy Note lineup was massacred last year when Galaxy Note 7 smartphones around the world started exploding like nobody’s business. It was so bad that Samsung couldn’t fix it even after announcing a global recall.

One of the major sources of negative publicity for Samsung during this period was the airports and planes, where strict posters and announcements asking people not to carry their phones to the plane with them if they used a Note 7. As a result of this, a lot of people lost confidence and faith in Samsung and swore off the brand.

Looks like Samsung is trying to fix just that. In a surprise move be Samsung, all the passengers on a flight in Spain were each given a free, sealed packed Samsung Galaxy Note 8. The $1000 smartphone also came with a message in Spanish which translates to “A year ago we asked you to turn it off, we welcome you today on board.”

This move is aimed to re-establish customer faith and confidence in the brand name by Samsung. By distributing free phones and asking people to turn it on, Samsung wants to deliver the message that unlike last year’s Note 7, the Note 8 is completely safe to be used on flights.

The Galaxy Note 8 is Samsung’s flagship smartphone and sells at a price of Rs 67,000 in India or around 930$ in the United States. It was released a few weeks ago to highly positive reviews. With the Pixel 2 XL’s display issues, the Note 8 has become a viable option for those who need the very best of Android.

Google Lens not working on Android? Here are 15 ways to fix it