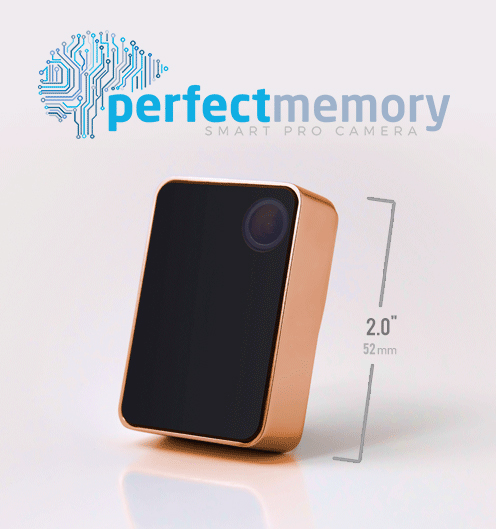 If you are into technology as much as I am, you must be already aware of the benefits of wearable technology. From Google Glass to Apple Watch, people dig the fact that they are wearing the technology than carrying it. And now, a New-York based firm – General Streaming Systems has developed a new wearable camera which allows you to ‘go back in time’ and capture the fleeting moments you thought escaped with times’ transient nature.

Called the Perfect memory Camera, it’s a 12-megapixel device which is lightweight and can be easily fitted into your pocket or worn around your neck. It’s like wearing a top-grade-spy-camera-necklace to capture the precious moments. Be it a sports car that you saw pass by an hour ago or your kid’s school play, with a tap on Perfect Memory Camera’s touch-screen, you can record audio and video in high definition (HD).

Why should I buy this?

It’s a multi-purpose wearable camera. If you feel comfortable, you can wear it as a hands-free bodycam. And once you indulge more and experiment further, you can attach it to the dash of your car, pair it with the sports action mounts, stick it to virtually any surface and even hang around your pet’s neck.

It has an extendable memory of up to 128GB and can be virtually controlled using a free Android or iOS app. The camera has the ability to wirelessly connect with a smartphone via the app, and simultaneously stream photos and videos live to your mobile device.

This is what intrigues me about wearable technology. Simplicity!

A virtual controlled wearable camera which can stream your video recordings!

There you go! Everything you need to know about this camera is in this post.

Now go ahead and pre-order this camera.

I am already way ahead of you!