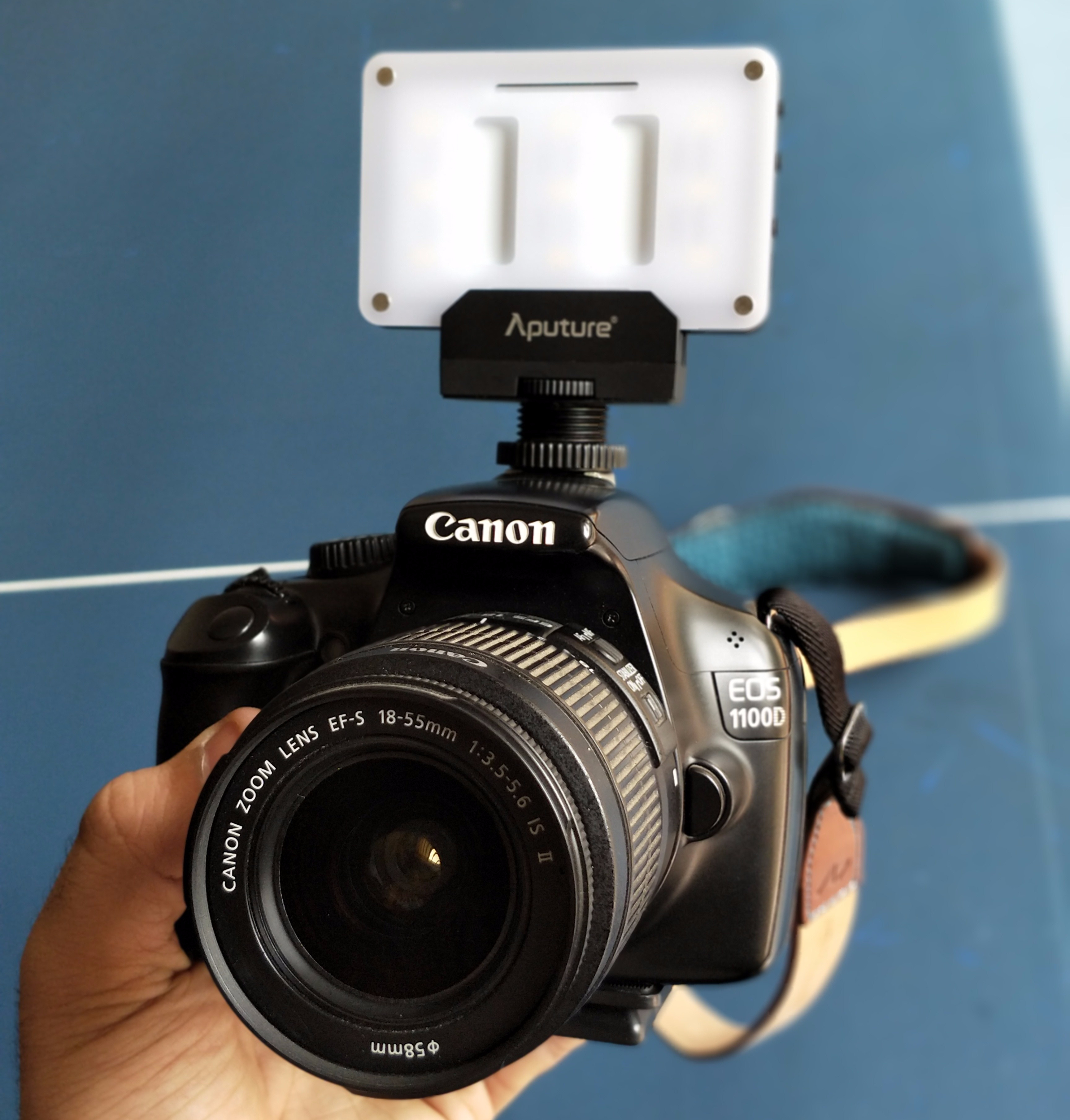 So, let’s begin by taking a look at the packaging. It comes in a little and smart looking box. Inside, it contains a nice padded soft case that has a carabiner on it which makes it very handy in terms of accessibility as it can be easily attached to a belt or can be hanged off a bag, and I’m a person who prefers accessibility more than functionality in some cases.

It comes with a bunch of accessories. You’ll get the following in the soft case-

Starting with the tech specs,  the M9 weighs just 140g (4.9oz) and is smaller than your smartphone, it’s just 11mm thin. It’s so small that you can easily carry it in your pocket without a problem.

It uses 9 SMD TLCI 99 LED bulbs and comes powered with an 1800mAh lithium polymer battery with a nearly 2-hour runtime at full brightness when fully charged. That’s what Aputure claims and to be honest, they’re pretty accurate about it. After 1.5-1.7 hours, the light tends to lower the brightness but considering it’s size and 350 lux of luminance at a distance of 0.5m, it is really awesome.

The light can be attached to a standard 1/4-20” mount, making it compatible with all your magic arms and tripods.

Now, we all appreciate a product that’s designed with attention to details, that’s what Aputure did with the M9. It comes with magnetically attachable diffusion filter and a CTO and CTB filter, hence giving you the icing on the cake.

Considering the features and portability the M9 offers and that too at a price of just $45 (₹3,000), it is a must buy for every photographer and videographer out there!

I personally use the the diffusion filter a lot while taking portraits. Talking about portraits, there are a lot of times when you need to play with the exposure and brightness and that’s where the M9 becomes a helping hand. It comes with just a basic sliding on/off switch and two buttons for increasing or decreasing the brightness in 9 small increments.

It can easily be charged with almost any micro-usb charger but it takes around 3 hours to charge so always carry an external power bank in case you’re shooting outside.

The M9 worked well as a fill light in interview situations when used with diffusion.

So, to conclude, I’d say the M9 is definitely a good buy for all those videographers and photographers out there and at a price of just $45 (₹ 3,000), the Color Temperature range of 5500±200K and a really wide 120° beam angle does make the M9 a very attractive option for your lighting purposes.

Personally, I’ve taken a lot of portraits using M9 as the only source of light, and the countless times I’ve used the M9 over my OnePlus 5’s flashlight in dark. Moreover, if you take long exposures at night, then this is something you should tag with you to your next hike.

We’d like to thank Aputure for sending over the M9. It’s been a pretty good addition to my camera gear.