Apple Dictates the Smartphone Industry and MWC Proved it 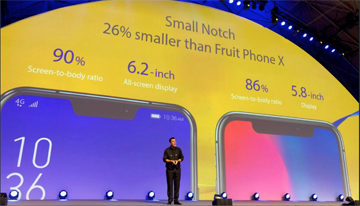 Mobile World Congress(MWC) is an event that takes place every year in Barcelona. It is the largest gathering of all the players in the mobile industry, where brands show off what they’ve got planned for their latest crop of smartphones.

Major announcements like Samsung’s Galaxy S9, Nokia’s new range of Android One powered phones and Vivo’s in screen fingerprint scanner took place this year. However, Apple, which ,like every year, did not bother with MWC, was still all over the place. It was 2 of Apple’s signature iPhone X features that were presented as Android rip offs at MWC this year.

With the iPhone X came Animoji, which, for the uninitiated, is basically an animated emoji that uses Apple’s array of front facing sensors to replicate the user’s facial expressions on to that emoji. It is a fairly gimmicky feature and while it was quite popular when the iPhone X first came out, the hype died soon enough.

At MWC, Samsung unveiled a new feature with the Galaxy S9, called AR Emoji. The basic idea is to use the front facing camera to create a look alike character of the user. It is also used to project the user’s emotions on emojis. However, since the Galaxy S9 lacks the array of sensors that the iPhone X has for FaceID, the performance of AR Emoji is not comparable to Animoji and reminiscent of Snapchat’s Bitmoji.

Ripping off the Notch

When the iPhone X was unveiled, the huge notch met critical to mixed reactions with many calling the design rough and unpolished. We called the notch iconic and symbolic like the home button used to be for the iPhones.

At MWC this year, Asus announced the new Zenfone 5. And there’s no other way to put it, they blatantly and spinelessly copied the notch on the iPhone X. They even went on to shame the iPhone X for having a bigger notch and less screen to body ratio. If that’s not enough, they also copied the traffic signal dual camera look of the iPhone X.

Chinese iPhone ripoffs are no rare sight and they mostly come out based on the leaks even before the actual product is out. But Asus is a huge company with ample revenue. It would’ve been nice to see such a brand actually try to innovate instead of disgracefully copy another product’s look.

It’s hard to digest but even after all these years since the original iPhone came out, it seems Apple has a huge influence over the industry. So much so that whatever they implement is mindlessly copied by some Android manufacturer sooner than later. It is perfectly summed up by this tweet.

If Apple were to put bunny ears on the iPhone on Monday, by Wednesday we'd have bunny-eared Android phones in stores. This is the world we live in.