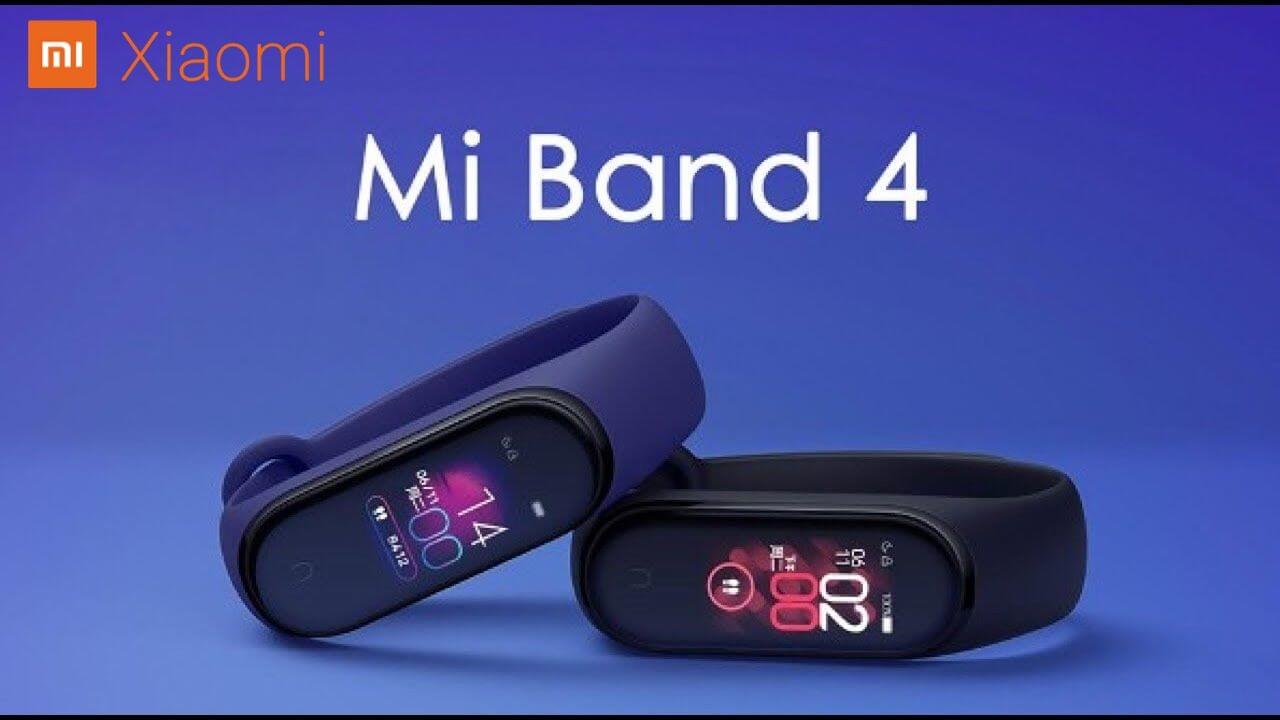 Xiaomi Mi Band 4 was released in China on 16 June 2019, and in India on 19 September 2019. From the last three years, Xiaomi has been rolling out amazing features to its Mi band series. The Chinese electronics manufacturer has cemented its position as the unbeatable brand in the budget wearable segments.

Xiaomi continued to live up to its hype with the Mi Smart Band 4. The company has added a new ‘Smart’ moniker as it believes that the band 4 has been fused with smarter features. The Mi Smart Band 4 is a feature-rich and affordable device at a price of Rs 2,299.

Let’s get to know the Mi Band 4

At first glance, the band may look indistinguishable from the Mi Band 3, but soon you would notice that the screen in Mi Band 4 is not as curvy as the Mi Band 3. The screen is neither curvy nor flat, Mi Band 4 chases a middle ground, and the end result is pretty good. The band has a capsule-shaped body that fits in a silicone band.

The prime upgrade is the screen itself. The Mi Band 4 features a 0.95-inch full-color AMOLED display that looks dazzling. Also, it comes with a 400-nit brightness, which makes it easier to read content on the band’s screen, even in the bright outdoors. The Mi Smart Band 4 offers you a light-weight design, along with comfortable straps that make it convenient for all-day-long wear. The fitness band is equipped with a single button that facilitates user navigation.

The AMOLED screen of the band helps in the clear reading of the text messages. So, you need not switch to your phone every time you need to check your emails or messages. It also allows you to create alerts for incoming calls, and let you put the call on silent or reject it. But, the Mi Smart Band 4 doesn’t allow the users to pick calls. 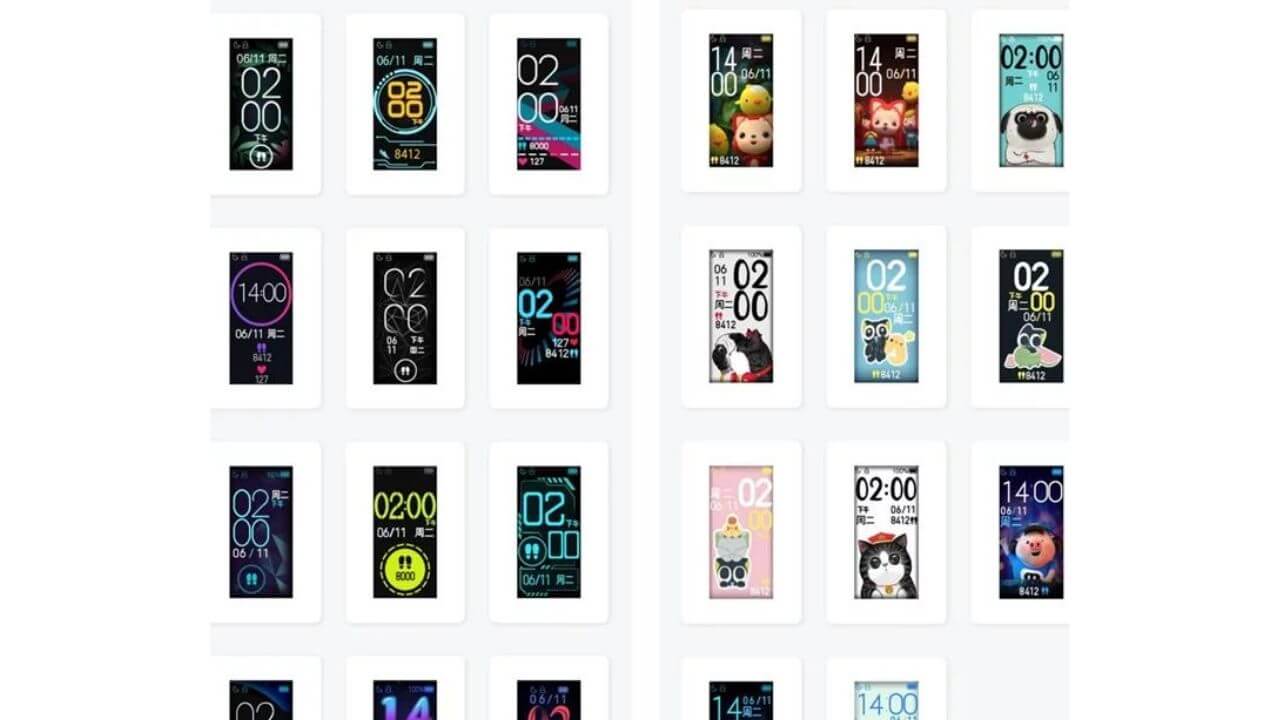 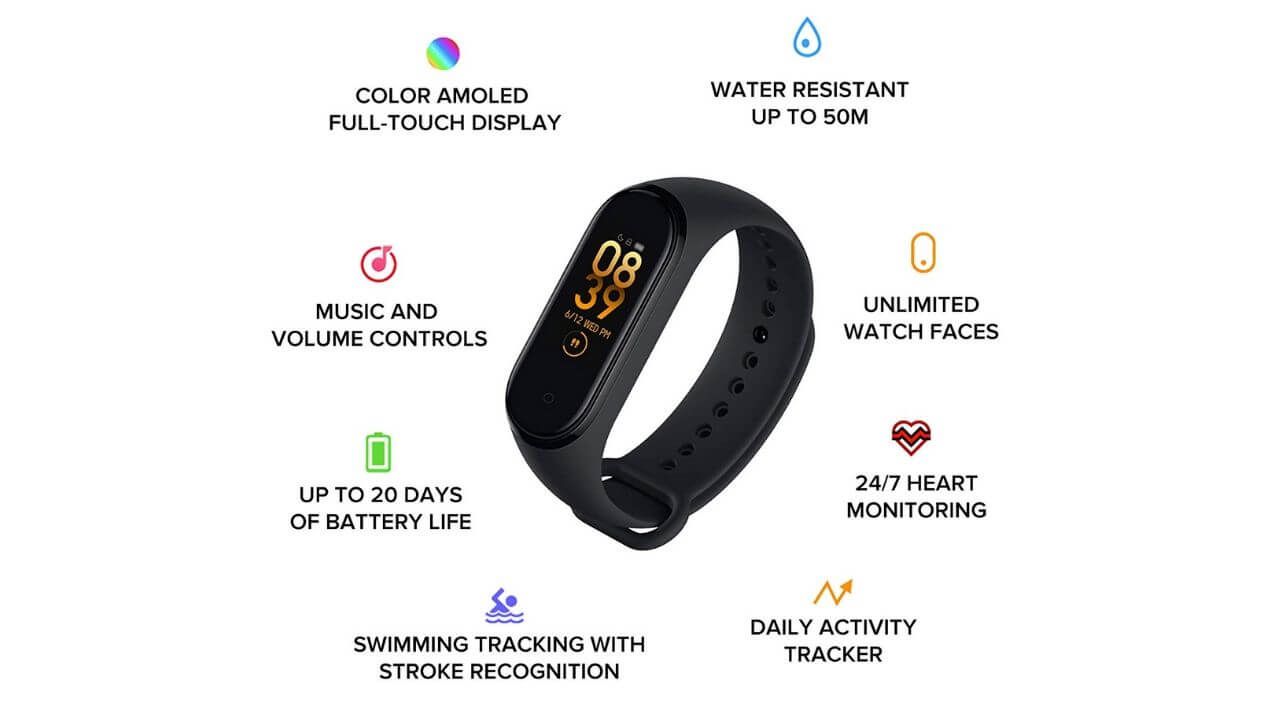 The Mi Band 4 allows you to access basic workout statistics, music controls, alarms, heart rate monitoring, weather, and phone notifications. Just swipe up the screen to see the daily fitness stats, unread notifications, and manually initiate a workout. One of the primary areas where the Mi Smart Band 4 literally stands out is the number of workout modes. It can track outdoor running, treadmill, cycling, walking, pool swimming, and generic exercise workouts. 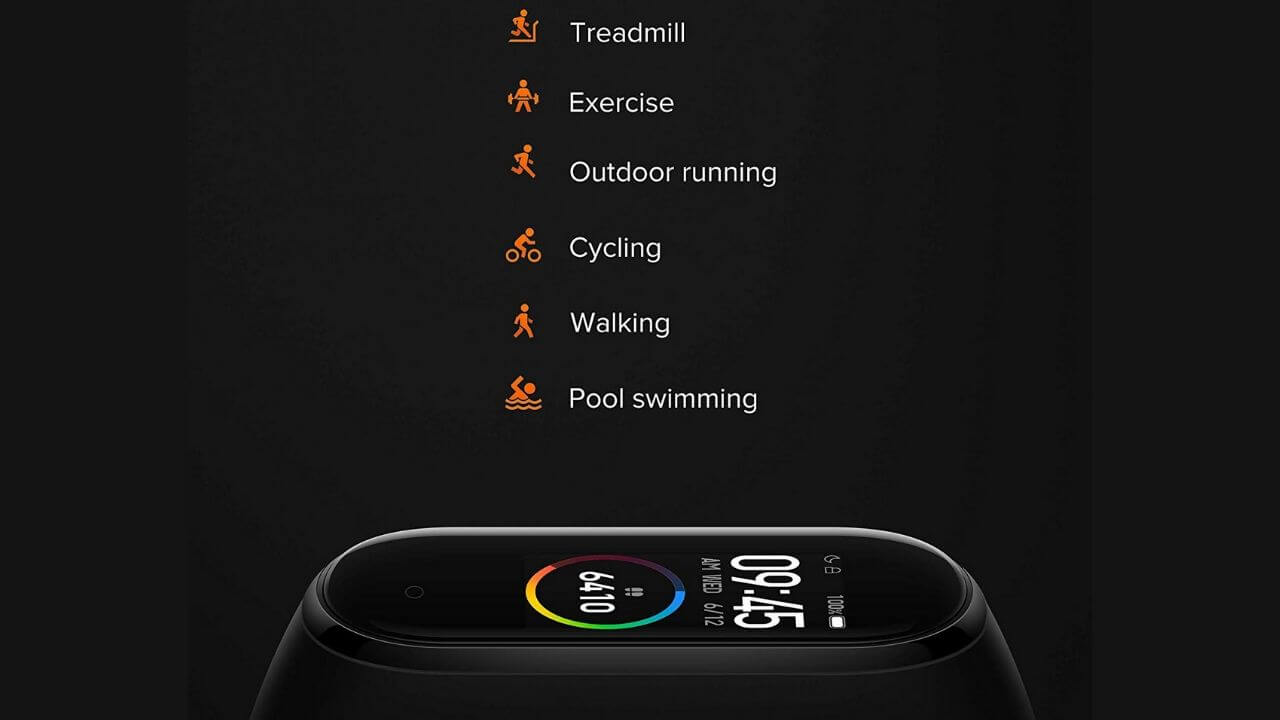 You can expect an accurate tracking, plus-minus 10-20 steps. The Mi band doesn’t have an in-built GPS, but it relies on your phone’s GPS to track the runs. All in all, the tracking features of Mi Band 4 are pretty accurate.

And, the Mi Band 4 has a water-resistance rating of 5ATM, so sweat and shower are never a problem. You can set the pool size, and the band is capable of recognizing five different types of swimming styles and record 12 different data sets, like stroke count and swimming pace.

Another preeminent feature of the Mi Band 4 is idle alerts. The fitness band starts vibrating if you are inactive for an hour. The diverse customization options make the Mi Band 4 a stellar product in the fitness tracker category.

Night Mode: The brightness of the band is dimmed automatically after the sunset or at your specified time.

Vibration pattern: You can create a custom vibration pattern for each notification type. So, you can instantly spot the difference without even looking at the screen.

Do not disturb: The DND feature can be turned ON even without your phone nearby. So, when your phone is getting bombarded with notifications, you can switch to the DND mode to get rid of them.

Auto screen wakeup: You can set the display to activate only when you lift your wrist. So, the device won’t disturb you while you’re trying to sleep.

The band is tremendous at sleep insights as well, and it can record your heart rate while you’re asleep. It can monitor light and deep sleep and measures how good or bad the user’s sleeping pattern is. Based on the analysis, it will give you recommendations on how to get better sleep. Also, the band can work as a wristband alarm. You can set up an alarm directly on the band, under the ‘More’ section, it will wake you up with a light vibration. 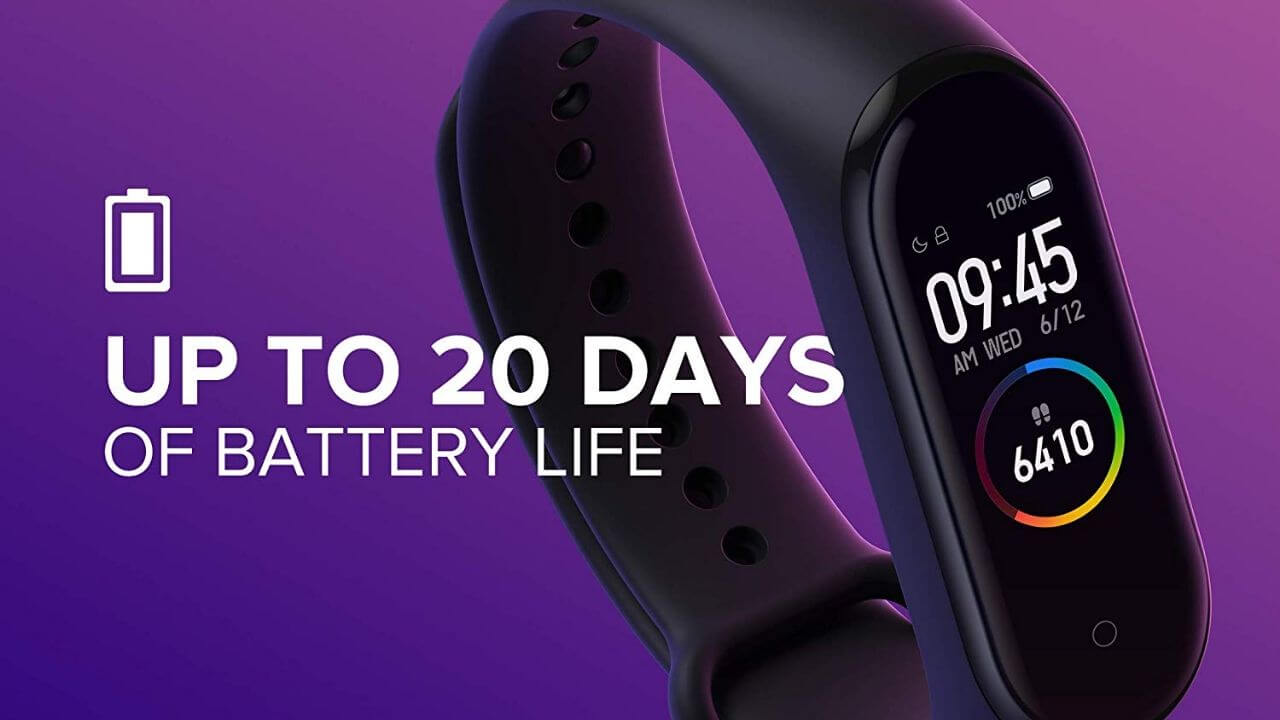 The battery life of the Mi Band 4 is incredible, and it lasts up to 20 days, depending upon the usage. There are a lot of optional settings and modes, which, when turned ON, would quickly drain the battery. But, most of the users have found that the battery lasts up to 14 days, with all the heavy battery-consuming options turned on.

Is it worth buying the Mi Smart Band 4?

Yes, it’s definitely worth buying the Mi Smart Band 4. The AMOLED screen, better visibility in bright outdoors, and an option to customize the look of your fitness band makes it a tempting device. And, for the price tag of just Rs 2,299, there isn’t any other wearable that comes close to this band. Also, the long-lasting battery and a fairly accurate tracking ability frame the Mi Band 4 as an enticing product. It’s very difficult to find another fitness band, within this budget, that offers the same combination of features and value for money.