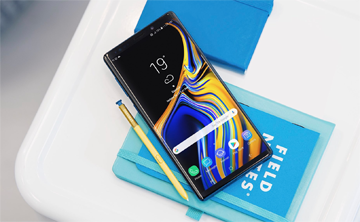 The Samsung Galaxy Note series has always been the all-out power user series which leaves out no room for anything but the best. The Note phones have always had the fastest processor on the market, tons of RAM, great camera, a phenomenal display and an explosive battery life. But what really sets this series apart from the competition is the S Pen. Simply put, Samsung’s stylus technology is unrivalled and those who love it just can’t get enough of it.

This year, to no surprise, Samsung launched the Note 9 and went all out with the greatest everything. Unfortunately they went all out on the pricing too and this resulted in a $1000 price tag for the 128+6 configuration the Note 9 and a whopping $1250 for the 512+8 configuration. That is a lot of money. If you don’t want to spend so much on a phone, there are a lot of budget options like the OnePlus 6 and Samsung’s own S9 and S9+.

However, if you really want to get a feel of the Note series, look at the Galaxy Note 8. An year later, the Galaxy Note 8 is still an amazing smartphone. It still has a better and more vibrant display than most 2018 flagships with no notch and tiny bezels. The camera is excellent too and should suffice for all but the most hardcore Pixel touting smartphone photographers. Moreover, since the design of the Note 9 is just an iterative update from the Note 8, you won’t be missing out on much except perhaps the slightly better, still not good fingerprint sensor placement. While the S Pen on the Note 9 works on bluetooth, the one on Note 8 does not which means you cannot use it as a selfie remote or to control a presentation. You can still doodle away to your heart’s content. Where the Note 8 shines in my opinion if the form factor. These are unapologetically large phablets and the fact that the Note 8 is narrower than the Note 9 just makes it slightly easier to grip and not drop.

And with the Note 8 being almost an year old now, deals are flying everywhere. Samsung India has officially slashed the price of the phone by a cool Rs 13,000 here in India. Websites like Swappa also have a lot of interesting deals with mouth watering prices. Better mouth watering than eye watering!

So, if you can afford the Note 9, go for it. It’s a beast of a smartphone with no scope to complain. However, if you’d like to save a few bucks and still get most of the Note experience, take a long, hard look at it’s predecessor.

Best OnePlus 9 Cases you can buy